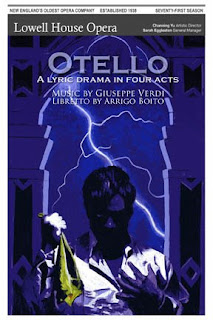 We saw half of Lowell House Opera Society's production of Otello last night, in which our daughter sang in the children's chorus, then brought her home at intermission.
That's ok. I prefer Puccini to Verdi anyway, and I had no desire to watch Otello strangle Desdemona. I always find intensely frustrating the problems that arise in books, movies, operas, and plays that could be so easily avoided by simple communication among the characters. Why didn't Emilia go to Desdemona right away after Iago forced her to hand over the handkerchief? Why didn't Otello just confront Desdemona directly about Cassio, instead of getting himself all worked up over hearsay? But I suppose a lot of relationship problems stem from completely unnecessary misunderstandings.
Sometimes I enjoy applying diagnostic criteria I learned in medical school to literary figures. Shakespeare's work is replete with DSM-IV disorders. Poor Desdemona was the innocent victim of Iago's Antisocial Personality Disorder working on Othello's Paranoid Personality Disorder. Hamlet was a veritable poster-boy for major depression.
I found my psychiatry rotation during medical school fascinating. It did shake my faith, though: things that we, in common parlance, often call "character flaws" or even "moral failings" are attributed in medicine to brain chemistry and the interplay of environmental influences, gene expression, and neurologic development - a highly deterministic view that many argue is largely supported by research and observation. If no one can really help their behavior (although some people feel they can), is anyone ultimately responsible, or despicable, or laudable, for it? Perhaps the human brain only seems to have free will...("Seems, Madam! Nay, it is; I know not 'seems.' ...I have that within which passeth show...")

I've just reread a book I consider one of the greatest achievements in contemporary fiction: Mark Haddon's The Curious Incident of the Dog in the Night-time, which is narrated by a gifted but highly challenged teenager with Asperger syndrome. Like George Saunders entering into his character Morse's intractable anxiety in the short story "The Falls" and Robert Morgan living through a patient's dementia in "Night Thoughts," Haddon is able to inhabit the mind of his protagonist, Christopher, and give the reader an intimate, vivid look into his perceptions of the world. It's a truly brilliant piece of work.
What makes these stories, and any story, so good is the way they bring about fresh recognition of some part of ourselves as readers, even if the characters are nothing like us. "I'm totally like that sometimes!" we think, or, "I SO get how that could happen." We diagnose our our own humanity, like med students leafing through the DSM-IV, exclaiming, "That's me...and so is that!" and in the process, come to some better understanding of mysteries our inadequate words can barely express.
So we should keep reading stories, and watching them, and listening to them, and writing them. We should do it for our patients, our families, ourselves. Maybe someday, then, we'll actually be able to say, "Oh yes! Now I understand." At least for a moment, until the next mystery unfolds.
Posted by T. at 10:49 AM

Ah, the fabled Psych rotation.
I recall the following three rules of psychiatry:
1. It's OK to talk to yourself (I do it all the time - it's the only way I can assure myself an intelligent interlocuter).
2. It's OK to talk to the wall (often the only one who can deal with the crap I say).
3. It's NOT OK if the wall talks back to you.

That one STILL makes me laugh! :)

The beauty of opera is you can safely get inside the minds of people with all kinds of antisocial disorders because of the invitation that a beautiful voice offers you. If the characters all communicated with one another and solved their problems in rational ways, there would be no reason to stay in the theater. Or even go.

There are several DVDs of Domingo in the title role of Otello. He kind of "owns" the character, having spent so much time in his shoes: years and years, most of his career. And he understands Verdi's brilliance. You might want to check one of them out in order to find out how the opera ends. You won't be disappointed, I promise.

Elaine - I think my parents had a video of Domingo in the role; I have a childhood memory of watching the Moor smother poor Desdemona with a pillow, which I found disturbing then not only for the horror of the violence of it but also because of its profound injustice. It's so infuriating!

The other opera whose plot bothers me to the core, but whose music I love - I get misty-eyed every time Mario sings Recondita Armonia or E Lucevan Le Stelle - is Tosca. SO FRUSTRATING! Poor Mario! It kills me. They thought they could live happily ever after, that everything would be okay after all - then that awful moment...who wouldn't jump off the Castel Sant'Angelo? Tragic!!!

If they saw this my kids would say right now, "MOMMY. It's JUST an opera. It's FICTION. Relax." But see, it's not JUST anything, precisely because of what you say: the music penetrates straight into the heart and just sweetly KILLS you. Ah, painful bliss... :)

I love those three rules! First time I've heard them, and I just snorted coffee onto my keyboard...

I don't know the opera, but I studied Othello for my A Levels (UK exams for 17-18 year olds). I love the play - the whole reason that it is a tragedy is because of that failure to communicate. The lynch-pin is Iago - Emilia is scared of him, and both Desdemona and Othello are too trusting of him - they can't believe that he would deliberately hurt them. His character is one of the ones which (I feel) comes closest to pure evil in Shakespeare's plays (or at least out of the ones that I have studied). He doesn't act because he wants something, it is revenge for an imagined insult, and a true desire to totally destroy the people around him.

The book that I love, not for the writing, but for the way that it changed my husband's life is "K-Pax". Not a fantastic story, though the writing of the various psychiatric patients is very well done. However, what was so changing for us was that at the end was a brief list of the various syndromes covered, and where to go to get more information - from that, my husband was able to self diagnose that his twitches and mild OCD was not as a result of the severe bullying he received as a child, but a mild version of Tourette's. He therefore felt less ashamed of the twitches, tried to repress them less, with the result that their overall effect has greatly diminished.