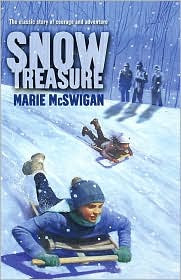 When I was a little girl one of my favorite books was the short, 1942 novel Snow Treasure by Marie McSwigan - still in print after over 60 years - which tells the story of how during the German occupation in 1940, some Norwegian children helped smuggle a town's gold stores to
safety by hiding the bullion in their sleds and sledding past the Nazis.
Who wouldn't love a story in which some kids stick it to the Nazis?
It's supposed to be based on true events, but of course some might say we can never really be sure.  In any case, it's a thrilling, well-written book.
I happened to have a Norwegian patient recently, and as I was setting up a procedure for him I began to make small talk about this book.
"You know, when I was a child one of my favorite books was about Norway.  About some Norwegian children that smuggled gold in their sleds right past the Nazis."
The soft-spoken man gave a smile.  There was something in it that made me pause what I was doing and look at him for a second.
"My uncle had a boat.  He helped transport some of that gold to the Shetlands, and to Orkney, on his boat so the Germans wouldn't find it."
I can't explain why, but that moment made my day.  That, and getting his arterial line in on the first shot.
***
We're told in med school that taking a good history is crucial to arriving at an accurate diagnosis and effective treatment plan.  But I love the stories that sometimes emerge after those clinical details get skimmed off the top and put to their proper use.  The medical history helps us provide good care; the stories of a person, though can help us catch a glimpse of what that care might mean.  Stories both express and define our humanity; they help us learn who we are, ask (and answer) why, and make connections.  I've always believed story is everything.
It can be easy to forget that behind the alphabet soup of medical conditions listed on patients' histories - CAD, HTN, NIDDM, CVA, PVD, COPD, AAA, CHF, CRF, PUD, GERD - there are people who are so much more than their lists reveal.  It's easier to just get the work done - more efficient, too, supposedly, and more logical.  But there's something worthwhile about getting to the real stories.  Why the almost-hundred-year-old woman with so-loud-you-can-hear-it-across-the-room aortic stenosis refuses to take her earrings off for surgery.  Which patient has gone home from his job every day feeling the most content (so far it's the brick-layer from O.R. 9).  How the quiet Asian couple up on labor-and-delivery met.  Of all tattoos, why that tattoo.
People are more like poems than textbooks.  I hope I keep getting better at listening and understanding, at picking up on people's real, human side even as I'm trying to piece together the clues to their illnesses.  I've never regretted learning more about the story behind the history.  Everyone has one.  I don't ever want to forget that. 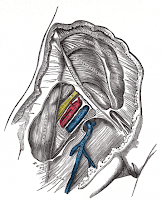 ***
Speaking of arterial lines...
Check out posts with an anatomical theme and some wonderful illustrations from Gray's Anatomy at Oystein Horgmo's FANTASTIC edition of SurgeXperiences, now up at his blog The Sterile Eye.  A great blog, and a great blog carnival!
Posted by T. at 9:47 PM

Haven't heard about that book. I'll have to check up on it!

No gold transporters in my family, but my great-grandfather, who was a teacher, was jailed during the war for refusing to teach nazi propaganda in school.

The book is great. I must have been about 9 when I read it, and I remember I couldn't put it down!

Good for your great-grandfather for standing up against evil and doing the right thing - especially as a teacher - despite tough consequences!

That is a nice post, QuietusLeo! Thank you for sharing it.

What a thrill it must have been for you to meet a person who remembered a true story associated with one of your favorite childhood novels! I still pick up and read passages from the tattered old volumes I've kept since I was a small boy. Those stories stick with you for a lifetime. Those interested in the WWII period might want to check out my new novel, The Fuhrer Virus. It is a fictional spy/conspiracy/thriller for adolescent/adult readers and can be found at www.eloquentbooks.com/TheFuhrerVirus.html, www.amazon.com, and www.barnesandnoble.com.

I have a great-grandmother who was born in Norway. During her teens she spent every summer up in the mountains, tending the family's goat herd and making cheese. According to family legend, she hated it - hard work and too lonely - and that's why she immigrated to the U.S. when she was 18.

One branch of the family still lives in Norway and my mother, who speaks some Norwegian, corresponds with them from time to time. They apparently suffered some real hardships during WWII.

Everyone has a story, if we only take the time to ask and listen.