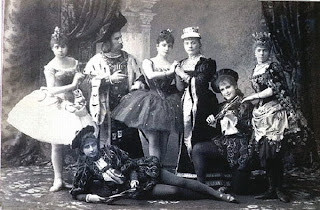 Original cast of the ballet Sleeping Beauty at the Mariinsky Theatre, St. Petersburg, 1890, with Carlotta Brianza as Aurora, Marie Petipa (daughter of choreographer Marius Petipa) as the Lilac Fairy, Enrico Cecchetti as Carabosse, and Pavel Gerdt as the Prince.
Happy Birthday Tchaikovsky! (And Brahms, and Robert Browning - I don't mean to short-change them, but I'm in a Russian ballet state-of-mind at the moment).

Every year on May 7 I think of Tchaikovsky and what a huge part of my life his ballet music has been. Every time I see a gentle snow falling outside my window I hear his snow scene from Nutcracker in my mind, and not even Mussorgsky's Night on Bald Mountain can conjure up dancing goblins for me as well as Tchaikovsky's Carabosse music from the Prologue of Sleeping Beauty. There are also those exquisitely beautiful adagios filled with pathos, or longing, or even in some cases an almost prayerful reverence - I'm thinking of any number of pas de deux from Swan Lake or Nutcracker or Sleeping Beauty - that have the power to break hearts open and spill intense emotions a lot of people throughout the centuries have seemed to want to work hard to suppress. Tchaikovsky bares them all - he wears his heart on his sleeve and consequently has at times been criticized for being maudlin or even "vulgar." Perhaps this is why I have a soft spot for him: his music gives us permission to feel great joy and sorrow and love and awe in a world where there can often be distrust or disdain for such non-rational experiences.
Tchaikovsky met with a mysterious and tragic end after a deeply troubled life. I wish he could have known what joy he would bring to generations of people through his work and foreseen that over 100 years after his death there would still be people like me who would think of him with gratitude on his birthday.

When I was growing up I did a LOT of ballet - at least two hours a day. I wanted to be a ballerina and even took special classes in New York with a prominent teacher there. I read about ballet history, watched ballet videos daily and learned all the major parts, took master classes from Margot Fonteyn and Melissa Hayden, and had the chance to meet Rudolf Nureyev, Cynthia Gregory, and Robert Joffrey.
I gave up that dream when my skinny pre-adolescent figure ballooned in high school and I realized I couldn't sustain a 1000-calorie-a-day life forever, but dance has always been a huge part of who I am. Now I can enjoy it stress-free, and I've been getting back in touch with its history, especially after visiting the Mariinsky Theatre in St. Petersburg. I didn't realize until this year that Mathilde Kschessinska had been Nicholas Romanov's mistress, or had tried to sabotage Olga Proebrajenska by releasing chickens onstage during one of her solos, or that Marius Petipa and Ekaterina Vazem had aired out their resentments so publicly, or that Anna Pavlova had reduced Tamara Karsavina to tears over a "wardrobe malfunction." Colorful stuff!

Ballet has evolved into something truly athletic - high legs, gravity-defying leaps, eye-widening spins by both men and women - but it wasn't always so. Dancers from the early 20th century may seem technically less capable to us now - a perception which, incidentally, isn't necessarily accurate - but they had an artistry and elegance that has become increasingly hard to find. Fonteyn, Kolpakova, and Alonso might look old-fashioned to viewers with today's sensibilities, but there was something special about dancers of their generation that I could watch over and over again. They and the later 20th-century greats - Plisetskaya, Gregory, Kain - bridged the gap between the late Romantic Period / turn of the century, dominated by Russian ballerinas like Pavlova and Karsavina, and the stars of the 1990's / early 21st century: Sylvie Guillem, Alessandra Ferri, Darcey Bussell, Polina Semionova, Alina Cojocaru, Vishneva and Lopatkina. 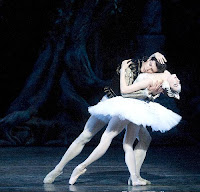 Technique can dazzle but without depth and soul it's a hollow Fabergé egg with no treasure inside. There comes a point when getting your foot up by your ear is no more than a cheap thrill - a trick that comes from being born with flexible hamstrings rather than from the kind of artistic maturity and musicality that makes a true Odette or Aurora or Giselle. I'll take Cynthia Gregory's Rose Adagio from Sleeping Beauty over ANY young Mariinsky dancer's today, much as I admire the latter.
Posted by T. at 11:10 AM