Le Roi Est Mort, Vive Le Roi; or, is God dead? Or alive? And What Does That Mean, Anyway? 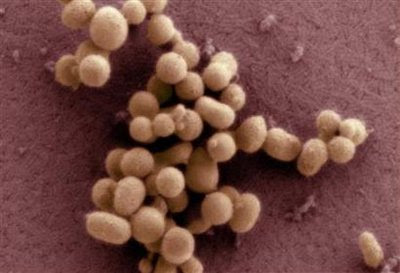 A week ago Craig Venter announced the creation of the first synthetic cell: an organism with a fully synthetic genome. That is, he and his team took more than 1000 preassembled units of DNA, constructed from them the full genetic code of the organism Mycoplasma mycoides, and transplanted this prefab genome into the emptied-out cell of the organism Mycoides capricolum. The latter's protein-building molecular machinery recognized the DNA and "booted up" the cell. In short, it came alive.
Some have gleefully touted this the beginning of the end of religion. One commenter at OnPointRadio wrote,

"Science has accomplished what was inevitable and finally robbed religion of the argument that life is more than mere chemical processes...that it is some mystical, magical thing for which only 'god' can account...Hopefully this puts religion one step closer to obsolescence...humanity will never be rid of this human scourge that is responsible for so much intolerance, division, war and strife, but little by little, science is removing religious dogma regarding the monopoly 'god' has on life...At long last, religion's final tenuous argument about the mystical nature of life dissolves..."

Art Caplan, who directs the Center for Bioethics at UPenn, said on the On Point radio episode about Venter's achievement,

"To make non-living parts come to life I think is a major achievement. Not only does it open the door toward, as you've been discussing, some of the design of the microbial world to serve our purposes but it also philosophically pushes the notion that some sort of vital force or special force is necessary to understand life itself. I think this achievement kind of refutes that and basically says it is possible to understand what makes life tick in a more reductionist, mechanistic way...
...When you start to be able to figure out your million base pairs and order them up the right way, and then transfer them into a dead husk of another microbe's cell, and have the thing fire up and do everything that a bacteria's supposed to do, you have in a sense brought to an end maybe 3000 years of debate among philosophers and biologists about what is life. You're basically saying it's something that's under the control of a set of coded instructions. If you have the right chemistry around it, you can make things come to life. That's a pretty amazing demonstration and a pretty important moment in the history of science. So in that sense, understanding life, understanding how it works, seeing that you can even create it and manipulate it - I don't want to push that into the background. That's major...[It] puts you on the road that says we will be able to pull apart the ingredients of life, artificially synthesize the whole thing someday, and that there's no mysterious force out there, no ineffability."

I agree with science writer John Horgan, however: the mystery of life's origins is not solved by this laudable experiment. I also don't think that simply being able to figure something out, down to its molecular mechanisms, or even recreate it, proves the non-existence of the divine or the mystical. Everyone has beliefs about what Reality is and little "proofs" to defend those beliefs, but most of the "proofs" I've heard from both rationalists and believers strike me as dissatisfying or incomplete. I have no well-formed concept of God, nor do I deny the possibility of us all being merely biological machines whose consciousness passes into oblivion when the machines stop working. But I have experienced the ineffable and the inexplicable. Thoughts and ideas themselves, attractions and aversions, enjoyment and creativity, to me would remain somewhat inexplicable, greater than the sum of their parts, even if one could parse out every molecular mechanism behind them.
The more important question, I think, is not whether Venter's achievement and synthetic genomics prove or disprove matters of faith (which are inherently un-provable anyway) but whether we have to worry about the Frankenstein phenomenon: lab experiments spinning monstrously out of control. Time and time again we get ahead of ourselves ethically and morally: we start doing and making things without having responsible conversations to prepare for the issues that inevitably arise with technological advancement. According to Venter his latest achievement breaks that mold, and bioethical discussions occurred before the experiment was carried out. I hope thoughtful reflection - so easily and arrogantly dismissed as unnecessary or unfashionable - becomes the norm rather than the exception in an era in which science is galloping ever-faster as politicians, lawyers, and religious leaders try to keep up.
Posted by T. at 5:02 PM

What would be adequate to disprove to you the existence of a god-figure?

For me, I'll accept the existence of a god-figure if I see reliable evidence of a human who has lost a limb regrow it without medical care.

The answer is, I can think of nothing that would EITHER prove or disprove the existence of a god-figure. Most of the examples that people come up with on either side - as I mentioned in the post - usually strike me as dissatisfying and at times even silly.

Interesting debates. I agree that the monstrosities that this kind of work inevitably will help create are concerning. I always wonder about the ethical side of this kind of research and what, if any, are the limitations of which we should be aware. Religion is for me little. It can be a tremendous force for both good and evil.

Thank you, RAG, for at least acknowledging that religion can engender good as well as bad. So many religion-bashers demonize it as only a force for evil, weakening their own position through prejudice / generalization and failing to mention that many atrocities have been perpetrated by atheists as well as believers. Religious groups have no monopoly over violence, war, strife, corruption, and abuse; it's called human sinfulness (for lack of a better word at the moment) and last I checked we're all prone to it, religious or not. The earth wouldn't be free of misery without religion - and for the record, I don't count the earth's misery or the existence of human suffering as "proof" of the nonexistence of God. In many cases it's just proof that we can really SUCK at being good to each other.