The Gift of "Small" Moments 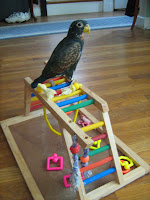 This weekend was truly lovely. We acquired two additional sons temporarily - our good friends had their wonderful boys, ages 10 and 13, stay with us while they went on a long-awaited trip - and as a bonus we also got to know their cute bronze-winged Pionus parrot (Pionus chalopterus).

The brothers were adorable trying to figure out what key to start singing the Hebrew blessing in before dinner Friday night - both are musicians, one with a deeper voice than the other. "Baruch-no, that's too high...Baruch-ato--no, still can't reach that..." But they found their note and set the tone for a nice evening.

I love the way family prayer, sung or spoken, can re-center our scattered lives and bring us together around the table from the various forces that tug us away from that center every day. When we four are alone as a family we often resurrect the old Catholic tradition of saying the Angelus at dusk, another call to pause and refocus busy lives on love and family. It's balm.

The rest of the weekend was truly relaxing - seemingly ordinary, but to me quite special. We enjoyed a blueberry pancake breakfast at a farm in Concord, went on a hay ride, played our favorite family card game, ouistiti, two nights in a row, maneuvered around a birthday party here and a tennis game there, discovered a tiny local lunch place that serves breakfast all day as well as some exotic items (falafel), and spent time enjoying the weather in Harvard Square hopping from book store to book store (my favorite!). My daughter has big plans to sing for her supper on a street corner. She gave her last dollar to a boy who was playing Sarasate's Zigeunerweisen, fairly well, too. 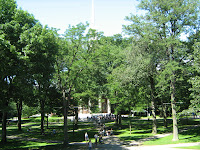 I envied all the students reading and writing in the Yard. I do get nostalgic for my college days; I remember only what was best about them, not the stress. We took position at an old favorite spot of mine, one of Widener Library's broad "sphinx pedestals" as I call them, and watched tourists and students crossing each other's paths below. It was wonderful to be able to just watch and have no fixed time-table.

Today I bought a book called The Last Duel, by Eric Jager, in a used book store called Raven. It's a gripping tale of medieval Normandy, the true story of a fight to the death between a

squire and a knight whose wife had accused the squire of raping her. The result of the duel was supposed to demonstrate God's judgment of who was right and who was wrong in the matter. Or, as one of my "temporary sons" intelligently said when I told him about the book, "So, whoever was more physically fit would turn out to be innocent?" It was the last time a dispute was mediated in this manner, hence the title of the book.

It's amazing to me that people ever thought God would work like this, and flabbergasting to me that they sometimes still do.
Posted by T. at 8:45 PM