Patriotism, Identity, "Race," and Other Constructs 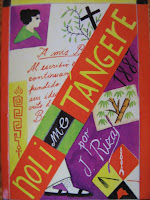 Most people unfamiliar with a book I'm reading this summer might think from its protagonists' names, Juan Crisóstomo Ibarra and María Clara de los Santos, that it's a Latin American novel. But it's actually what Penguin Classics calls "the great novel of the Philippines": Noli Me Tangere, written in Spanish by José Rizal. The novel contributed to a greater awareness of national identity in the Philippines, eventually leading to a revolt against colonial Spain.

José Rizal is revered as our national hero, a patriot who died in the name of freedom from oppression. I don't know that I would face such a fate with courage or acceptance. I have often wondered if I could, but I have also wondered, is it really fair to extol patriotism as a virtue when sometimes people who are born in one country can develop a deep love for another?

Spain first colonized the Philippines in 1565. The Spaniards ruled over the Philippines for over 330 years - longer than their rule over Venezuela, Colombia, Ecuador, Argentina, Chile, or Mexico. We are geographically Asian, but in my opinion we are culturally "latino." In the Philippines one can find good paella as well as good spring rolls. Our Spanish surnames and colonial churches remind visitors more of places in the aforementioned Central and South American countries than of other South East Asian locales.

The Philippines declared independence from Spain on June 12, 1898, but this declaration was recognized neither by Spain nor by the United States, which paid 20 million dollars for

possession of the archipelago. Spain ceded the Philippines, Guam, and Puerto Rico to the U.S. with terms delineated in the controversial Treaty of Paris. My great-great-grandfather (pictured right) had a seat in the U.S. Congress for a time during our period as an American territory. Philippine independence was finally recognized by the U.S. on July 4, 1946.

I've been thinking about these chapters in Philippine and American history today. I celebrated July 4 in the company of Filipino colleagues and friends but served a decidedly American barbecue - hamburgers, hot dogs, pulled pork sandwiches, cole slaw, s'mores for dessert. I've been in the U.S. since I was a child. I feel very "American," but I also feel at home among other Filipinos and still speak our native language (though not as well as I should). It was my third language at home. English was my second, Spanish my first. My cousins and I may have been among the last Filipinos, as a generation, to learn (or at least hear) Spanish at home. Over the last couple of decades even English has taken a back seat, to our nation's detriment, in my opinion; we had at one time been fully bilingual, but a resurgence of nationalism in recent years has led to some misguided educational changes, including the decline of English usage.

I don't "feel" Asian at all, whatever feeling Asian might be. I hope African Americans won't mind my saying that I feel it would be as valid to call me a Spanish Filipina as it is to call African Americans African American. The ancestral distance is about the same, and in terms of personal affinity it would be a closer approximation of the identity I feel on the inside. On the outside, though, I look Asian - more Asian than other Filipinos, even, because I also have Chinese ancestry. In the Philippines because I have fair skin I am considered more "white" than most Filipinos, those that colonial Spain would have labeled as "indios." This has complicated social implications over there which have in the past been a challenge for me. I'm not white in the U.S., but I'm white in the Philippines. So, in fact, "whiteness" is relative - it's defined by the observer; it has more to do with who's categorizing me than who I really am.

That said, there are Caucasian (as in, blond, blue-eyed) Filipinos and many whose Spanish ancestry still expresses itself. My grandmother's sister has very light eyes, either blue or green. My daughter's are hazel - green in some light, with hints of my brown. She cannot "pass for Asian" at all and had to forego the idea of being cast as a kid in The King and I. My son has a pretty Caucasian phenotype too. Sometimes I still get funny (puzzled) looks from people when I introduce myself as their mother.

So what "race" box should they, or I, check off on those forms that have a race box? How can I explain to them the existence of the race box, when I don't believe in the existence of race as a biological entity - only as a socially determined, historic entity (a useless, destructive one at that)? What becomes of our identity when we look like one "race" but feel a greater kinship with another? Why do human beings judge one another and draw conclusions based on appearance?

No easy questions, or answers, this July 4.

My mother is 100% Chinese and my father Caucasian, making me a hybrid.

I don't even know what to feel. I look a lot more like my Mom, so I actually get strange looks when people see my Dad with his light-brown hair and blue eyes.

The optimist would say that I belong (at least partially) to both Chinese and White worlds, but sometimes I feel like I can't quite identify with either.

Oh well, my Mom's siblings all married Caucasian people, so I have my half-asian cousins to identify with!