Would You Still Love Me If I Had No Face? 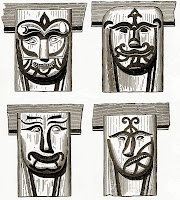 Chances are, if we were dating, and you were my boyfriend, and a pit bull or Rottweiler chewed my face off, you'd probably dump me sooner or later, even if you thought I was the most beautiful and special person you had ever known and you knew you'd never meet another person like me for the rest of your life.
Let's face it: faces are important.
Our faces identify us uniquely; so while "who we are" is not synonymous with "what we look like," people who can recognize me can point to my face, and say, "Yes, that's T."
We experience the world and the stories of our lives largely through our faces. A breathtaking mountain view, an achingly beautiful passage of music, a delectable restaurant meal, the smell of roses or chocolate or candles or wood burning in winter, a baby's head on your cheek, a lover's kiss, a laugh-so-hard-you-gotta-cry type of conversation with your best friend - all these things reach us through our faces.
We need our faces for a lot of important things. Food stays in our mouths instead of dribbling onto the table because of our facial muscles. People relate to us through our faces; our faces very often trigger our most important relationships and are instrumental in our continuing interactions. People understand us because we express ourselves with our faces as well as our voices. Our faces share our meaning, and our meaning is what we exist to communicate.
If you lost your face, in a way, you would lose your whole world.

But now surgeons can give you part of a face back. This morning the Boston Globe reported that Boston's own Dr. Bohdan Pomahac will begin to perform partial face transplants at Brigham and Women's Hospital. This is historic. There have been three other successful face transplants that I know of: two in France, one in China. A flurry of medical, ethical, and philosophical questions comes up each time the possibility of such a transplant arises.
Here's what I think would be great about restoring people's faces: the recipients could speak and eat properly again; they could participate in society once again without feeling so marginalized by their appearance; and they could remove some of the disfigurement that marred such a vital symbol of individual identity and that probably caused considerable psychological pain.
Here are the problems I have with the procedure: the recipient would have to remain on anti-rejection medications for life, which are not benign; if rejection occurred, the recipient would likely have to endure further disfguring surgery or a potentially grave illness; and the donor, as far as I understand from the case of Isabelle Dinoire, who received a partial face transplant in Amiens in November of 2005, would have to be a beating-heart donor, a situation which could be ethically problematic for some, especially those with ambivalence about the declaration of clinical death by brain death criteria.
Some people have also brought up identity issues - the psychological difficulty for donors' loved ones of having a portion of their loved one's face removed and placed on a stranger, and the challenge for the recipient of living life with an anatomically different appearance. To my mind these are outweighed by the potential medical risks to which the recipient is subjected.
Beyond these, I think this issue of face transplants calls each and every conscientious person to a reflective examination of his or her values, of what role the idea of self-acceptance should play in seeking treatment or healing for a devastating injury, and whether our criteria for accepting one another are themselves so acceptable. I don't have any answers; only questions. In fact I had a lot of tough questions swimming about in my head as I read about this stunning break-through. I've written down some of them, and while the answers may seem clear to some, I believe that clarity is contradicted by the disparity between our behavior as a society and what we say we believe or hold dear:
Why is having a mauled face so much worse than having a mauled limb, which itself can be physically and emotionally agonizing?
Why might agreeing to donate part of your face be harder than agreeing to donate your own heart - is your face more "yours" than your heart?
Does a human being have to look like a human being to have worth and dignity?
Does a sick and dying human being, or a malformed human being, or an "incomplete" human being, have less worth than other human beings? (History has shown the people can't even tolerate human beings of a different nationality or color, despite well-intentioned statements by many about the belief in every person's instrinsic value; what does that say about how we as a society assign worth?)
I have written before that the core of my faith is the belief that every person is precious. How well I live up to that faith, and how that fits in with the intricacies of the medical and sociological issues that are unfolding today, I can't say for certain. I guess I just have to keep learning as I go along.
Posted by T. at 7:06 PM

T. I have read this three times, as, I suspect have countless others. There are no comments because there is nothing more to say. A remarkable post; thank you.

Dear Mitch, you are too kind! There are no "countless others;" I think I can count on two hands the number of people who spend time here - you, my mom & dad, my husband, his mom & dad, and a handful of fellow-bloggers. Thank you, as always, for taking the time to read, ponder with me, and respond so graciously.

Remarkable post. I am a plastic surgeon and have many of the same questions you have posed. I don't have great answers.

Dr. Bates, thanks so much for stopping by. With all of medicine, but plastic surgery in particular, there can be such intimate involvement with those things in people's lives that really "strike a chord" or "hit a nerve," so to speak! All those questions we all have are so challenging...but I guess that's what makes them important, and potentially edifying.