If I Had Been a Spider During Residency...

People have asked me how I deal with the sleep deprivation that's sometimes part of my job, and was a chronic, recurrent, unrelenting element of it during residency.

The answer is, while I was able to avoid developing a caffeine habit all through college and medical school, during my second year of anesthesia residency, when I was working in the ICU, I started drinking coffee.

It may have helped me GET THROUGH the nights and actually be able to TALK during rounds the next morning, but although I felt a little more alert temporarily, at first sip, I think there was nothing that was going to make me feel anything other than nauseatingly ILL after 18, 24, or 30 hours of being on my feet.

So instead of spinning webs like this (web of a drug-free spider): 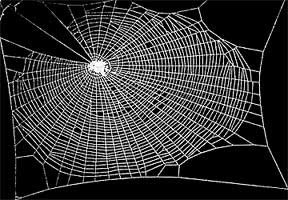 The webs I spun might have been (and probably were) like this (web of a spider on caffeine): 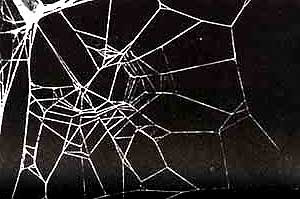 (These particular pictures are on multiple websites, so I'm not really sure how to give them the proper attribution, but the website I got them from was this one.)

You know what I love? They needed a STUDY to PROVE that sleep deprivation makes people perform below their capabilities. Dr. Charles Czeisler, chief investigator of the study conducted at Brigham and Women's Hospital, discussed the results on NPR. "The traditional 30-hour shift is based on the notion that it's better to have a tired doctor who started with you that day than to have a fresh doctor. But we found actually that the tired doctors made many more mistakes," Czeisler said. Well, DUH. Impaired judgement. Compassion fatigue and mood lability. Less safety and satisfaction for patients. I really don't think we needed a study to point out the OBVIOUS, but perhaps we need it to document these consequences, as a necessary step in the effort to begin instituting some change.

I remember once overhearing a patient say to a surgeon, "I don't want anyone operating on me who's been up all night," and thinking, now is really not the time to try to buck the system. Did you write any letters of protest to your congress person or whomever, prior to showing up, decrying the use of torture to train physicians and transmogrify them from compassionate idealists to cynical, IRRITABLE, bitter, resentful, disillusioned bags of sheer exhaustion? Probably not. But you want the system, based on the insomnia of cocaine-addicted "father of American surgery," William Halsted, to change spontaneously and suddenly into something liveable and REASONABLE? I don't think so. This ain't Europe.

I think I might be sounding a little peevish right now. I think it's because I'm on call tonight and away from my family. Not all residents hate the sleep deprivation system as much as I did. Some need less sleep than others, and some cope very well with the arduous schedule. But I despised it, because I thought it was unnecessary and unhealthy for both physicians and patients, and thus unjustifiable.

Incidentally, my hospital's solution to residents' increased risk of falling asleep at the wheel driving home from a 30-hour shift? Cab vouchers. So, we were so tired we needed cab vouchers, but we were still expected to be at the top of our game making decisions about patients, cutting them open, sticking needles and wires into their necks, etc., the same day we were supposed to be taking the cab home?

It's true what they say, even about the Brilliant Minds of Medicine: ignorance can be educated, but stupid is forever. Although maybe not forever, in this case. Maybe if enough major errors are made, or enough patients die at the hands of exhausted physicians, this country's medical establishment will get the "wake-up call" it has needed since a cocaine-addicted surgeon instituted the system over 100 years ago.

Addendum: the spider web images, thankfully, are in the public domain because they were produced by NASA, whose copyright policy states "NASA material is not protected by copyright unless noted" (see NASA copyright page and JPL image use policy.) They were created as part of this research paper: Noever, R., J. Cronise, and R. A. Relwani. 1995. Using spider-web patterns to determine toxicity. NASA Tech Briefs 19(4):82. Published in New Scientist magazine, 27 April 1995.

dunno about american doctors. but then this is true...even in india ...cALl center employees are made to work overtime ....after a 9 hour night shift ....

guess its too cruel sometimes...where does this rat race end ???

For me I knew there would be a light at the end of the tunnel, and I just had to make the best of the moment...it did get better eventually. But it's truly difficult when you don't have complete control of your situation, i.e. you need to get from point A to point B, the only way to do that is to traverse the tunnel, and the people in charge of the tunnel collect heavy tolls or erect hurdles! I suppose it's the human condition...

Thank you for visiting, all the way from India!

Yup. Truck drivers aren't allowed to do it, but we are. It's an abuse of the trust patients place in physicians in general (and anesthesiologsts and surgeons in particular)

Hi, T. I've been having fun reading some of your back postings.

I finished my IM residency 7 years ago, but still occasionally wake from a nightmare that I'm an intern again.

Through the entire 3 years of the program, I was convinced that the light at the end of the tunnel was a Metroliner. :-) Thank goodness I've been having more fun in practice.

Oops. Forgot to add, Congrats on coming in second!