The Limits of Viability 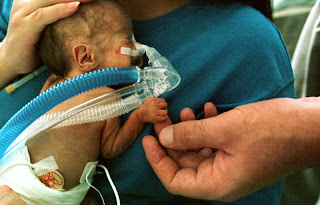 21 weeks, 6 days.
As far as I know, this is the gestational age of the youngest premature infant to have survived beyond birth. Amillia Taylor (not the infant picture here) weighed only 10 oz and was only as long as a pen.
This makes my 32 weeks back in the early seventies look like term.
***
The story I'm about to tell may elicit a strong reaction from some. I need to retell it because I it's an experience that has stayed with me, and the telling of it helps me understand, gradually. I don't want anyone to infer any opinions or judgments on my part; I'm not interested in sharing opinion right now. Just telling a story.
In my third year of medical school, during my rotation in OB/gyn, a couple was admitted for termination of the woman's pregnancy. The fetus, whose age I don't recall exactly but I believe was somewhere in the teens (for weeks of age), had Down Syndrome. I remember very little about the tasks I was asked to do outside the couple's room - perhaps a little shuttling of pain medication or fetching a sheet of paper for the residents involved more closely with the couple. Their privacy was maintained as much as possible.
A few images are branded into my mind from that day. I remember catching a glimpse of the couple just after the termination was completed, when the door swung open so the fetus could be brought out of the room. The man had his head on the woman's and they were sobbing quietly together.
A little later I remember passing the cleaning supply room and noticing that the fetus had been placed in there, for whatever reason. I asked one of the residents if it would be all right if I looked in on the fetus. Permission was granted and I went. I could not tell if the fetus was male or female - externally this was not yet visible. But I recall being able to see the heart beating through the chest wall, and feeling a mixture of disbelief, confusion, and helplessness because it took such a long time for the heart to stop.
***

During my intern year I had an unplanned "take your child to work" day because a snowstorm closed my daughter's day care center and she had to get dropped off at the hospital, where I was doing a rotation in the neonatal ICU. I thought it was kind of cute that she went on rounds with us in the less restricted unit, and thankfully the NICU attendings thought so too. She took it all in stride - the incubators, the eye covers on some of the tiny babies to protect them against the treatment lights for jaundice, her mom in a big blue gown and mask about to do a spinal tap or place an umbilical line. The attendings took turns playing with her and taking her to the cafeteria. It was the one time the high-stress environment of the NICU felt a little brighter for me.
***
I wish people wouldn't pass judgment on parents who ask for everything possible to be done to save their children.
I wish people wouldn't pass judgment on parents who ask that their children be left in peace if resuscitation appears futile.
I wish there were easier answers to the question of what is futile and what isn't.
***
Many thanks to Brian Hall for making the first image above publicly available on Wikimedia Commons, where the second image can also be found.
Posted by T. at 8:54 AM

Thank you for sharing your difficult reflections on a NICU experience from long ago.

I would bet that most of us in the medical field have some difficult stories, but fear sharing them for a variety of reasons.

Your thoughts provoked a few of my own in today's blog The Distress of the NICU Parent - Each Person Only knows Their Own Pain.

Thank you again for the food for thought.

Dr. Dyer-Thank you very much for visiting. I also appreciated your own blog reflections today and your insight about the hesitation to share the tough stories in our profession.

I was concerned about discussing the challenging experience on this post as well as one from a few days ago, which I wrote about on "(This) Sux," but if we can maintain privacy and respect, I think there is something important and valuable about telling our stories, as doctors, as patients, as people. I hope doing so results only in some good, be it richer dialogue or a sense that as professionals and human beings we have lessons and experiences in common.

It seems to me that the best blogs give prose images of snippets of the authors personal life. The measure of a good post is whether it evokes a sense of "trueness" or empathetic understanding. The charm of it is that you do not have to endure twenty-three edits and rewrites. In exchange, your audience is tens or hundreds instead of thousands. You have a very nice touch with your posts; I expected no less from an anesthesia blogger that quotes Willa Cather. Vending machines one day, tragedy and suffering the next-that's what we do, eh? Have you read William Carlos Williams' "Doctor Stories" Try it, you'll like it.

Mitch, I'm both delighed and humbled by your enjoyment of your visits here. I love your Ether Way as well, and I think the exchange of ideas blogging offers as a genre has made this far more fruitful and interesting for me than pen-and-paper journal-writing which, though potentially wonderful for intellectual and spiritual growth, lacked that extra dimension of interchange among storytellers / writers / readers / teachers / learners. Thank you for your support!