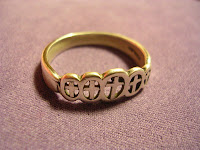 For the last couple of days I have been following news items about Lydia Playfoot, a British teen who lost a court battle for the right to wear her "purity ring" in school. I came upon the story quite by chance; I was on call overnight yesterday, and our hospital's default welcome page happens to be msn.com, which featured the story prominently in its news section.
Today I feel like opining rather than story-telling.
In my opinion, it takes great courage for an adolescent to stand up sincerely and vocally for her beliefs when those beliefs are not shared by the majority of her peers (or for that matter, the adults in her society). Any young person who tries to do good and encourages people, by word and example, to respect of self and others, should be applauded.
Some people have criticized Lydia for "making such a big deal" out of a little ring, saying that she can still speak out about abstinence with or without an article of jewelry on her finger. I agree with the latter statement, but I also know that symbols can be exceedingly powerful, and the ring may in fact be a very big deal for her, regardless of anyone else's opinion of it.
Whatever one's personal view of fornication may be, from a medical and psychological standpoint the following, in my opinion, may be reasonably inferred:
-if every single person waited till marriage to participate in sexual intercourse, the rates of sexually transmitted diseases and unwanted / unplanned pregnancies would likely be vastly reduced;
-if every single person waited till marriage to participate in sexual intercourse, the emotional pain, confusion, or disappointment often associated with dating relationships would likely be mitigated.
As far as I can tell, most things that are considered "wrong" within certain faith systems involve hurting oneself or one another. I believe most religions that have what, by most modern American standards, might be considered "conservative" norms regarding sexual morality probably have people's best interests at heart. Simply put, we're supposed to take care of ourselves and avoid hurting each other. Thus mocking, disdaining, or categorically criticizing these norms, without giving their underlying foundation of care for the human person its proper respect, is, in my opinion, an uneducated, arrogant, intemperate act.
That said...
I think a private school is well within its rights to prescribe a dress code for its students and can, at its discretion, in light of a regulation against jewelry that applies to all students, ask that students refrain from wearing symbols of their beliefs that are not strictly required by their belief systems. I believe it wrong, however, for a school to favor certain articles over others - cross necklaces ok, but bracelets not, head scarves ok, but gowns not, etc.
I am also a little wary of the exaltation of the word and concept of "purity." By implication people whose behavior has failed to meet certain standards can be considered "impure," tainted, sullied, stained, dirty, inferior...you get the idea. This mode of discourse equates a person's worth with his or her "purity" - already a fallacious equation - and predisposes to a great deal of judgment that, in theistic belief systems, should supposedly be left to God.
There are belief systems in which even the merest physical contact with "contaminated" objects and individuals elicits more aversion than a scrub nurse's horror of a medical student accidentally touching a sterile drape. But I like Jesus's take on purity politics: it's not what touches you from the outside that makes you impure, but rather what's in you that defiles you (Mark 7:15). It's all about what's going on deep down - you may act morally, but are you really moral in there, in your mind and heart? Haven't I smiled at people but resented them or disparaged them in my mind? Well, yeah, and shame on me; isn't that about as impure as it gets?
Jesus also said "blessed are the pure in heart." This isn't to say he thought we could all casually copulate with anyone just because we were "good on the inside" and felt like it. On the contrary, he said people should keep not only their hands etc. off each other's spouses, but also their very thoughts. He wasn't stupid. He knew it was normal for the mind to wonder and wander...but he taught active rather than passive morality: work to curb selfish impulses; make acts of love, and a life of love, a conscious, continuous choice, starting with what's inside of you and proceeding accordingly.
What I would love to see in our world of many beliefs and belief systems is this: virgins who don't look down on unmarried non-virgins, and non-virgins who don't look down on virgins. I would love to see a world, in fact, that's cleansed of any kind of "looking down," that's spiritually wearing a ring inscribed with Luke 6:37 - Do Not Judge. That would be a purer world indeed, one in which the "lions" and the "lambs" really could lie down beside each other free of all domination and fear.
Posted by T. at 2:38 PM