Excursions in Medical History: In Memoriam 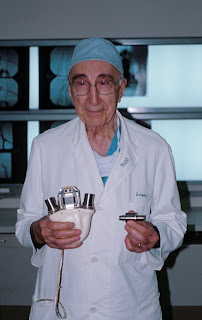 How to begin to honor this true medical pioneer, who was cited as a "Living Legend" by the Library of Congress in 2000?

DeBakey. I hear his name almost every day. He developed over 70 medical instruments. Every time I hear a surgeon ask the tech for "DeBakeys" - forceps, or perhaps clamps or a needle holder - I think of him.

He was born Michel Dabaghi to Lebanese parents in Lake Charles, Louisiana. At the age of 23 he invented the roller pump which contributed to the development of bypass machines that allow for heart bypass surgery. He was among the first to perform coronary artery bypass surgery, as well as to develop an artificial heart, a left ventricular assist device to bridge patients waiting for a heart transplant, a surgical camera stand to allow surgery to be captured on film, MASH units, and vascular grafts. He pioneered clinical assessment tools and procedures, including the first carotid endarterectomy in 1953. He developed the DeBakey Classification to describe aortic dissection - a condition which took the lives of Lucille Ball, John Ritter, and Rent composer Jonathan Larson - and the Debakey Procedure to correct it. In February of 2006 he became the oldest person, then 97, to undergo and survive his own procedure. Done by a surgeon HE trained.

The list of awards and honors he has won is too long to post but can be found here. Among them was the Congressional Gold Medal, which placed him in the company of Edison, Salk, Washington, and Churchill. He operated on Hollywood stars, heads of state, and ordinary folks who meant more to their families than any performer or politician ever could. He trained THOUSANDS of surgeons, passing on a legacy of good work to future generations and countless patients. What a life!

By many accounts, he was TOUGH. By some accounts (this I have third- or fourth-hand, through an attending who knew a resident who trained at Baylor years ago) he had an ego about the size of the state in which he practiced, and expected doors to be opened for him in every corridor. I don't know if this is accurate. On film, though, what we see is what we see; a Nova documentary entitled "Electric Heart" gives us a brief glimpse into what it was like to train under him: 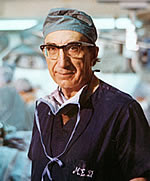 NARRATOR: Dr. Michael DeBakey is a pioneer of the artificial heart. In the 1960s he was one of a handful of leading heart surgeons. Known as the Texas Tornado, he both inspired and terrified those around him.

MICHAEL DeBAKEY [film footage]: What do you mean, "it's not flushing"? No, no, no, no, no. Put your finger over that. You're not concentrating, you're watching me.

BUD FRAZIER: Dr. DeBakey was quite a task master. It was like working under a Marine drill sergeant. He was very tough, he expected actually much more of you than you could actually do.


His career was also not without its share of academic drama. In 1969 Dr. Denton Cooley, a heart surgeon at St. Luke's Hospital, somehow pilfered the artificial heart Dr. DeBakey had developed in a lab at Baylor, with N.I.H. funding, and implanted it in a patient at St. Luke's. DeBakey found out about the heist by reading about in the paper. He felt that Cooley had committed theft and the unethical act of using an unapproved, experimental device in order to claim a medical first (transplantation of an artificial heart into a human patient). Cooley claimed it was a desperate effort to save a patient's life.

I thought the following story quoted in The New York Times, about a trial involving Dr. Cooley, spoke volumes about his character: 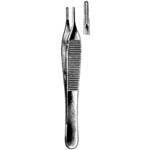 Dr. Cooley recalled that a lawyer had once asked him during a trial if he considered himself the best heart surgeon in the world.

“Don’t you think that’s being rather immodest?” the lawyer asked.

Dr. DeBakey's character, by contrast, is revealed by the way "he refused to testify in the litigation that followed; he did not want his rival to be found guilty. 'Much as I regretted what he did,' Dr. DeBakey said, 'I didn’t think vengeance would solve anything.' ”

Very often when we think of someone who is faraway or who has passed away, their words come back to us. We can hear their voices in our minds and hearts, and it's these memories that evoke the person's presence and spirit. Here are some more of DeBakey's own words:

On his work: "I like my work, very much. I like it so much that I don't want to do anything else."

On faith and God: "Practicing Christian physicians do not necessarily kneel and pray as they administer to their patients. It is, rather, a matter of communing with God on a continuous basis. God guides us; we are his instruments."

Requiescat in pacem, Michel Dabaghi. Millions of people for years to come will owe their lives and lessons to you. 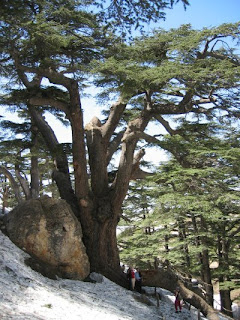 Photo: a cedar of Lebanon

Inspired: The Breath of God - Conversations with Gifted People about their Faith and Inspiration, collected by Joanna Laufer and Kenneth S. Lewis (currently out-of-print)

Great post that helps the layperson (i.e., me) get a better sense of DeBakey's accomplishments — thanks.

Thanks, Michael - I learned a lot too doing the research for it. Physicians "grow up" with this household name, DeBakey...hear it in the O.R. as med students, then as residents, then still as attendings...and then you realize, WOW, this guy was one of those rare GENIUSES...! I can't even fathom the impact this single life has had.

At Texas Children's, we are two doors down from Methodist (DeBakey's OR) and next door to St. Luke's (Cooley's OR). We are "related" to both, in that Baylor was affiliated with Methodist for years, so our residents came through there, but we were part of the Texas Heart Institute at St. Luke's. Confusing, no? And Dr. Cooley's son-in-law, Charles Frasier, is our premier heart surgeon. So when you start in our main OR, you are taught to call the forceps DeBakeys or vasculars. But in the CVOR you MUST call them Cooleys, never DeBakeys.