Fusia Podgorska and the Milgram Experiment

Last night my family and I watched a great movie about a teenager who kept thirteen Jews hidden in her house after the Nazis invaded Poland. It's based on the true story of Stefania ("Fusia") Podgorska, beautifully dramatized in this film written by Stephanie Liss, starring Kellie Martin as Fusia. I had seen it televised on Lifetime in 1996 and waited for years before it finally became available on video in 2002. (Still no DVD, though! Aaaaargh!)
I especially liked the fact that although there are some graphic moments in the film - the bombing of Przemysl, civilians getting shot, Jewish families being herded into a transport train, the body of a work camp victim being carried back to the camp in a wheelbarrow - I felt it was an excellent introduction to the history of the Holocaust for my school age kids. They were both very moved by the story and asked great questions afterward - about war today, and evil, and suffering, and if there are still people like the Nazis.
There are several haunting moments, like the Jews in hiding in an attic partition, crammed together with rats and a bucket for a toilet, half-starved, but having to deal with the smell of delicious food being cooked in a kitchen below; or them kneeling in solidarity with Fusia as she prays desperately for help; the courage of her younger sister, Helena, only seven years old but heroic beyond her years; an unexpected Christmas dinner; and of course all the moments of sorrow and loss as familes got torn apart.
The question that kept going through my mind was how did Fusia come to make the decisions she made, instead of succumbing to intimidation and fear and simply obeying authority? How was she able to listen to the authority of her own conscience and moral convictions, when doing so put her life and the lives of her sister and her friends at risk? When asked about it later, she reportedly said, "I didn't do anything special." Przemysl was liberated on July 27, 1944. At the time of the film's release, she and her husband, one of the survivors she kept in hiding, were celebrating their 51st wedding anniversary.
Just last week I was in a discussion with someone who was criticizing the staff at Kings County Hospital for standing by and doing nothing while a patient coded and died in the waiting room. "I would never have done that," she said. But there are social psychology studies that suggest otherwise, and numerous papers on the now-well-know phenomenon of Bystander Effect. Equally famous is a social psychology experiment on obedience to authority carried out by Stanley Milgram, in which volunteers were commanded to apply electric shocks to a person they did not realize was an actor feigning pain and suffering. Despite the actor's "pain," two thirds of participants kept obeying the authority figure (a man in a white coat) and applying the shocks anyway. Most people feel they would NEVER obey the authority figure's orders, or if they started, that they would never continue. But the experiment has been duplicated with similar results.
The medical simulator used by my anesthesia training program did a low-key version of an obedience-to-authority experiment in the simulator. I'm not allowed to disclose the details of the scenario, but I will say that although I was not entirely disappointed in the decisions I made or in my words and actions during the simulation, I was still a little shaken at the potential fragility of my own resolve - and, I imagine, that of any individual in a high-stakes situation whose convictions are tested against the control of a tyrannical aggressor.
Which brings me back to Fusia. The stakes couldn't possibly have been higher, nor could the aggressor have been more dangerous or more frightening. But she did it. She stood up to one of the most evil forces the world has known, with resourcefulness, diligence, grace, and uncommon valor. Where does that power come from? The answer is implicit in the film: she was a girl of tremendous faith - meaning strength of character, trust in God, and courage of conviction in the right thing to do and in the value of human life, all combined - and her faith, her way of being in the world, got her through, at least as this movie tells it. But where, I wonder, does such spiritual valor come from? Favorable brain chemistry? A transcendent gift? Both? It's a mystery - one the we've been blessed to glimpse through human beings like her, known and unknown, and the stories that leave their mark on this world. (Photo credit: http://www.ushmm.org/wlc/idcard.php?lang=en&ModuleId=10006455) 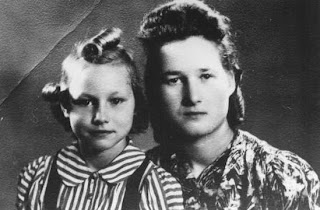 T, very nice post. I too have wondered if I would be like Fusia (but hope I never get tested to actually find out) and hope that I would. I like to think I would.

My wife and I sat at a table with her last week at the USHMM annual Days of Remembrance ceremonies. Still a pretty humble lady.

I just saw the movie with my 14 r. old daughter, Emily, and we were both shaking throughout. Your questions are so valuable. I've been in situations where I was not my best self and others where I was. I believe it's little steps of valor done on a daily basis plus faith and always seeing the big picture that will get me through the next time the challenge presents itself. Thanks for your blog. You deserve the award if all of them are of this calibre.

You mentioned there is no DVD but is IS available on You Tube.

Type in "Hidden in Silence Part 1" and it will appear.

I too like to think i'd be like Fusia- she sets a powerful standard! Thanks to her, so many were saved!

The movie is available on DVD from Amazon. I just ordered it.

Finally! Glad to hear it!

Truly inspiring and humanity one.