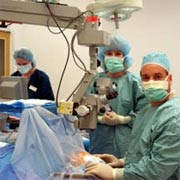 Why do we wear scrubs?
Before Lister, surgery was conducted in operating theaters with surgeons wearing their street clothes. Wikipedia tells us, "In contrast to today's concept of surgery as a profession that emphasizes cleanliness and conscientiousness, at the beginning of the 20th century the mark of a busy and successful surgeon was the profusion of blood and fluids on his clothes." Packing gauze consisted of the discarded stuff from cotton mill floors. Yuck!
By World War II, though, sterilized instruments, antiseptic drapes, and surgical gowns had come into common use. They were white at first, but along with the white walls the attire promoted glare and eye strain, so green began to be used for contrast, and later various shades of blue and grey. An article by Susannah Locke on Scienceline explains, "Green may be especially well-suited to help doctors see better in the operating room because it is the opposite of red on the color wheel...Looking at something green from time to time can keep someone’s eyes more sensitive to variations in red, according to John Werner, a psychologist who studies vision at the University of California, Davis...Such deep focus on red, red, red can lead to distracting green illusions on white surfaces. These funky green ghosts could appear if a doctor shifts his gaze from reddish body tissue to something white." The outfits used to be called "surgical greens" but are now called "scrubs" presumably because of their use in "scrubbed" areas.
It's nice not to have to worry about what to wear at work every day, and to have the way you look be of minimal importance. But it can be tedious to mill about in a sea of blue or grey or green where sometimes people don't recognize you in the locker room because you actually have HAIR (messy, of course, at the end of the day) and a FACE (now with discernible expressions). There's not a lot of opportunity to express one's individuality amid all the blue pajamas. Yet it happens - through hats. 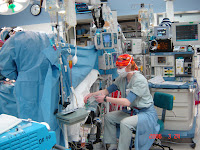 Some people go for color and a snug-bonnet look. 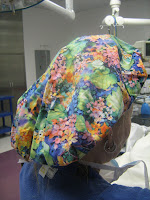 Others for poofiness and cheerful designs. For the most fun-filled ones, children's hospitals are unbeatable. I once knew a pediatric anesthesiologist named Bob who wore - you guessed it - Sponge Bob hats every day. Cute. 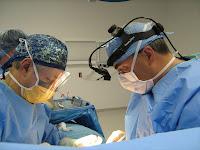 Some express pride in their personal background or heritage. 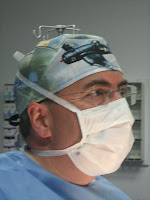 And others remind us of the non-medical hobbies near and dear to their hearts. This surgeon, a total sweetheart among surgeons, loves to fly planes...

The World Series sees a host of Red Sox hats and the occasional Yankees covering. The one time I get into the spirit of a season is in the winter, when I wear my Christmasy snowman hats. I've been a "color" person in the past, too, but lately I've been pretty lazy and just wearing the standard issue ones at the hospital. Maybe I should go back to my deep purple, or my bright teal, instead of succumbing to the un-creative convenience of the ones out of the box... 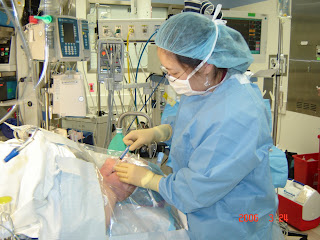 Check out Terry's enjoyable post, "Ode to Hat Hair," over at Counting Sheep.

For a much more edifying and serious excursion into medical history, please check out the post about Blalock/Taussig/Thomas on Suture for a Living.
Posted by T. at 10:27 PM

what a delightful post! when i was in Beijing for med school, we were all in grass-green scrubs and it posted a challenge to tell one another apart. with personal touches, as we do in the states, it definitely makes things easier.