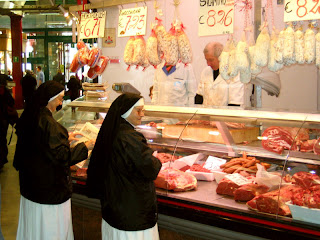 Usually I don't hesitate to delay a case in order to adhere fairly strictly to widely used NPO, or nil per os / nulla per orem, practice guidelines for fasting prior to a surgical procedure. I require the following time intervals before administering a general anesthetic to a patient:
after ingestion of clear liquids (water, apple juice, black coffee): a minimum of 2 hours
human breast milk for infants: 4 hours
light solids (e.g. toast & tea) and non-human milk/formula: 6 hours
heavy meal / fried foods: >6 hours, 8 if possible.
The theory behind preoperative fasting is that stuff taken by mouth - even the act of chewing a stick of gum - can increase acid production and volume of contents in the stomach. This then poses an increased risk of aspiration of dangerous material into the lungs under anesthesia. If the surgical procedure is urgent and must proceed regardless of a patient's food intake status, there are a couple of measures we can take to reduce gastric acidity, facilitate gastric emptying, and mechanically reduce the risk of pulmonary aspiration.
I made my decision in Sister Mary Immaculate's case by taking into account the nature of her intake - a small, quick-to-dissolve, paper-thin wafer - and the nature of her surgical procedure, which would not require a general anesthetic.
I was talking to my boss and colleague, Maddog, later about it, and said, as an aside, "Theologically speaking, of course, it wasn't bread any more."
"True..." he said, pausing to think about it for a moment. "But technically it was heavier than bread, right? Theologically speaking? I don't know - I'm a Protestant."
"Oh yeah...that's true...Well, I guess it was good that I gave her Bicitra, then."

Bicitra is an antacid. A nasty, sour-tasting, highly effective antacid that tastes like licorice, sea water, and a sour margarita all mixed together. Yuck.
His eyes widened with feigned shock: "You washed the Body of Christ down with Bicitra?! Hey, I think we're supposed to have lightning later...Maybe you should stay indoors!"
I had to laugh. The surgeon chimed in as he passed us in the corridor, jokingly coming to my "defense," "Just think of the complications we would have risked, though, Maddog, if her patient HADN'T gone to Mass and received communion."
Banter aside, it wasn't the mystical issues that gave me pause when I was first asked how I wanted to proceed. It was the culinary issues. Is a communion wafer considered a solid rather than a liquid, even though it practically melts in your mouth? If so, is it a light solid, and if so, would it have required me to impose a 6-hour wait had Sister Mary Immaculate's procedure required a general anesthetic? Or could I proceed without waiting but with the usual precautions we take for a "full stomach?" And would those HAVE to include a rapid-sequence intubation? How much increase in gastric volume and acidity could a eucharistic host possibly induce? Certainly less than chewing a wad of gum, I would guess. But that's just it - I'd be guessing. Guidelines aren't answers or rules set in stone. They're guidelines. There's research to back some of the concepts up - there's even a paper on the chewing gum issue - but not detailed research on every possible scenario.
In the end we just have to pool all our facts and experience together and make the safest judgment we can.

***
I often think about issues of faith versus science. Never did I think such esoteric details of religion, however, would come up like this, specifically, during my day-to-day practice of medicine! I guess it's fitting that I be reflecting on this particular experience today, the Feast of St. Thomas the Apostle, the quintessential mystical-belief-versus-empirical-reality guy, if ever there was one. I've always felt a kinship with "Doubting Thomas."
I love the intimacy with which Caravaggio paints the moment during which Thomas insists on examining, probing, Christ's wound - much as a modern surgeon would do a blunt dissection of fascial planes in the body as s/he tries to gain access to a person's inmost reaches. Thomas will not believe without tangible proof. Without a study.
Christ's response? Feel free. Go ahead, study, examine, learn, don't be afraid to "get your hands dirty" doing the work of seeking truth and understanding.
The result: Thomas got the biggest "Aha!" moment of his life. Recognition. Clarity. Epiphany. He was put in touch with the sacred, literally, and saw a truth bigger than himself, something his beloved teacher wanted him to understand.
I can't say that my personal truths have ever arrived so dramatically, either in faith or in scientific understanding, and I may be stuck in the "blunt dissection" phase indefinitely, but I cherish this story because for us spiritual-special-needs students out there, it's ultimately full of hope - hope that for every kind of learner, moments of doubt and confusion needn't preclude the possibility of real insight and transformation; hope in the patience of teachers who try to guide us; and hope that the way we go through the process ultimately matters more than our "success." 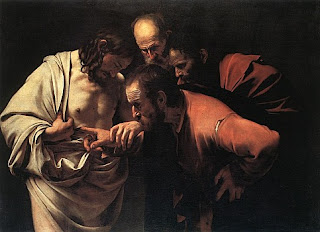 Thank you for this post. I am so encouraged by your thoughts on St. Thomas. (Spiritual special needs students -- I love it!)

I have been lurking for a while. I first came to you from another medical blog. (I am a medical psychologist.) But I have become a regular reader, not only for your thoughts on medicine and music, but for your thoughts on spirituality, as well. I often find myself torn between the religious people in my life who seem to have no doubts and the atheistic scientists in my life who also seem to have no doubts. I appreciate your willingness to be open about this because it makes me feel less alone.

Melissa, thanks so much for visiting! I really appreciated your comment. The one position that's never made sense to me is absolute certainty (hopeful belief, sure; reasonable confidence, ok; but unwavering absolute certainty? It's a little too cocky for me...). I too am glad I'm not alone!

Wonderful paintings notwithstanding, the Gospel texts do not assert that Thomas put his finger in the nail holes and his hand in Jesus' side—only that Jesus invited him to do so. His only recorded response was to say "My Lord and my God" (I'm citing from memory here...), and I imagine him falling on his knees while saying it. I don't think he needed any more 'tangible' (touching) proof of Jesus' resurrection.

First, props to the nurse who made the jump from Sister...Mass...Communion...Full Stomach. I would LOVE to have made that phone call!! That would've had us talking all day.

Second, I think there might be a paper here. You should seriously consider it. Or at least a little article. Good stuff.

This is why I heart your blog.

I was totally impressed that the preop nurse made the connection too! Total props!