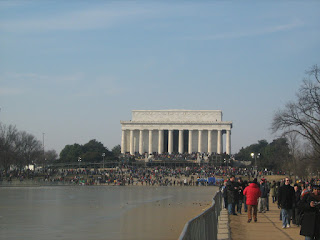 We were there!
We routed our trip back from the Philippines through D.C. on purpose, to try to catch some of the inauguration festivities, and we could feel the buzz as far away as San Francisco, where someone had left this giant set of foam fingers on the paper towel dispenser in an airport ladies' room: 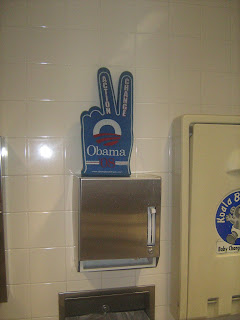 In the airport in D.C. there was a palpable vibration of excitement in the air. People were festive and friendly, as if unable to contain the good will and hope inspired by the upcoming historic event. 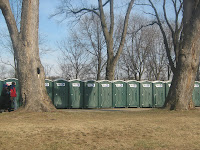 When we got up this morning, though, reports of nine-degree wind chill and commuting difficulties were a little discouraging. Nor did the thought of 5000 porto-potties for 2-3 million people make me feel too enthusiastic...What did people do back in medieval or Tudor times?  Carry chamber pots around?! 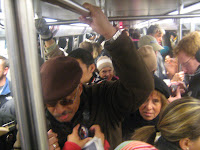 We decided to venture out anyway and take our chances. We boarded the Metro a little after 9 a.m. - a much later start than that of the folks who braved the 4 a.m. opening time. The cars were packed so tightly we didn't think we'd be able to exit where we wanted to, but at Foggy Bottom people graciously moved around to let us off the train. 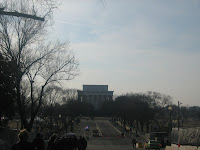 Our excitement mounted as we descended 23rd Street toward the Lincoln Memorial.  Once we got there cheerful greeters wished us a "Happy Inauguration" and solicited "high fives" from those of us arriving.
The mall looked beautiful in the morning sun. 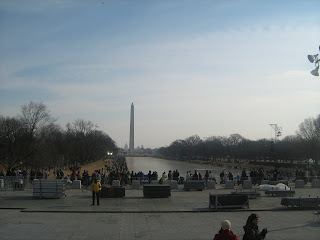 We walked toward the Jumbotrons near the Washington Monument and found a spot to sit within the World War II Memorial which provided warmth from the sun and surprisingly effective shelter from the wind.
How the crowds cheered every time one of the Obamas appeared on the screen. How breath-taking was John Williams' Air and arrangement of Simple Gifts played by four world-class musicians (Perlman, Ma, McGill, & Montero) representing the many faces of America. And how compelling it was to hear our new president call this country to unite, uphold our integrity and values even as we defend our safety, and stand strong in the face of hardship. 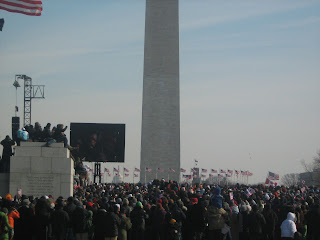 The joy of the people was visible on every street corner. Exuberance on every face. Even for those who made a different choice on election day there is something immeasurably important and earth-shattering to celebrate on this day.  Everyone, regardless of ideology, should be able to rejoice in the historic significance and triumph of this proof that we at last have been able, in some measure, to move beyond the stupidities of a racist past.  This is a great and momentous day for all, not just for democrats.
I thought of the sour grapes of those who have in the past criticized our president's tremendous popularity with the people, his eloquence and ability to articulate his vision (as one conservative pundit even admitted, he has a "writer's" mind). I wonder why those same cynics and naysayers don't reflect instead on the reasons behind this man's unmistakeable magnetism rather than resenting or envying it; could it be that he's right - that hope (hope meaning forward-looking vision, not mere optimism) is a much more productive and powerful force than fear; that integrity, competence, focus, real presence, and wise restraint are much more charismatic and in-keeping with people's dreams for their leaders, their country, and themselves?
At last, a class act.
At last, some intelligence, courage, dignity, and honor in the highest position in the land.
At last, some discipline and organization of thinking and procedure.
At last, someone with the sense and vision to welcome good ideas from anyone regardless of ideology, to encourage opponents to unclench their fists, and to see that labels like "big government," "small government" "left," and "right" are too narrow to allow for the full realization of our potential as a people.
At last, a figure who will regain international respect and demand of Americans and non-Americans the very best they can give, a high standard of integrity and hard work that he expects himself to match.
At last, the model of a healthy marriage and family in the White House.
At last, an African American takes the oath of office looking out over what used to be a slave market: we have finally grown up just a little more.
At last, a true leader who is able to win admiration and respect around the world and the love of his own people - even those who do not share all of his views - and who inspires - truly inspires - people of all ages and from all walks of life to move, to be engaged, to be fueled by hope, and to work toward transformation.
Posted by T. at 6:02 PM

Fantastic! Hope you had a brilliant day :-)

"Nor did the thought of 5000 porto-potties for 2-3 million people make me feel too enthusiastic...What did people do back in medieval or Tudor times? Carry chamber pots around?!"

Well - aside from the fact that even in London, the largest city in medieval Europe: "When Henry VII took the throne in 1485, the population of the city of London was about 75,000. By 1600 that figure had risen to 200,000."
(http://www.britainexpress.com/London/tudor-london.htm) - there was no sewerage system. Therefore you did what you did where you could (usually into the river or onto the street) - toilets were either chamber pots or "garderobes" - a hole in a board in a cupboard that dropped into a pit.

Jo, Thanks! I didn't know whether to smile or cringe when I read your comment. :)

My husband and I read many of Philippa Gregory's historical novels last year and are making our way through Season 1 of "The Tudors" on DVD, and I still can't help being distracted thinking about their lack of plumbing/how dirty and smelly they must have been and wondering how the women managed with those heavy skirts if they had to go to the bathroom while watching a joust or on the road from court to court, etc...Especially royalty - did Katherine of Aragon have a little private "chamber pot area" behind the jousting stands...? I guess my mind tends to wander quite a bit to these practicalities when I watch period flics and try to put myself in the characters' places...!

Beautifully put, T. I second all the "at lasts."

Back in 2004 Michael and I, along with our kids, had the great fortune of hearing Barack Obama speak to a crowd of a hundred or so people at the community college where I teach (he stood on the same spot where his Inauguration was broadcast, but facing the other direction), and that was electrifying.

Michael and I got to see and hear him in Springfield to a crowd of thousands, which was equally electrifying, but in a different way.

Thank you for letting us know in such eloquent terms what it was like to be there among millions.

Glad you were able to be there.

Forgive another digression into British lavatory lore -- I don't mean to detract from this glorious change in Washington at all, but I know that at least a couple of the individuals here will be amused at the etymology of "loo." That British colloquialism derives from the cry that accompanied the emptying of chamber pots into the street below: "Gardez l'eau!"

There are other attempts at explaining the origin of 'loo' on Wikipedia. The one that seems most likely to me: "That the word comes from nautical terminology, loo being an old-fashioned word for lee. The standard nautical pronunciation (in British English) of leeward is looward. Early ships were not fitted with toilets but the crew would urinate over the side of the vessel. However it was important to use the leeward side. Using the windward side would result in the urine blown back on board: hence the phrases 'pissing into the wind' and 'spitting into the wind'. Even now most yachtsmen refer to the loo rather than the heads." There is a lot of other interesting stuff under "toilet".

In French, when one has to go, one often says, euphemistically, "je vais quelque part" (I'm going somewhere). Nowadays, fortunately, all the public outdoor 'loos' here in Paris are free—a considerable advantage over past practice and over most American cities.

What a wonderful experience. Wish I could have joined you. Even the cold would not have been a deterrent to be there making history. Thanks for the pics.

Happy Inauguration! Glad you were able to go! : )