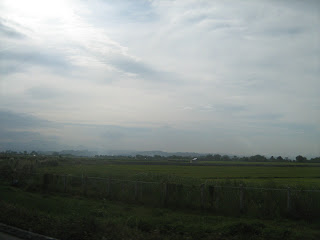 We're on the west coast on our way to the east coast and surprised to be so jarred at being surrounded by Americans. I guess my friends were right: you can take the girl out of the Philippines, but you can't totally erase the Filipina out of the girl!
My children are beginning to mull over their ethnic identity - my daughter especially. She FEELS very Asian and wishes she had grown up with more of her Filipino culture - especially the three languages, Tagalog, English, and Spanish, at home - but she LOOKS very Caucasian and her languages are Caucasian ones - English, French. I had the opposite experience: I grew up looking Asian but feeling very European and American.
More and more my kids are beginning to realize, I think, that their mother really did come from foreign shores and grew up speaking foreign tongues, eating foreign foods, perhaps even thinking differently about certain things from the way they are used to thinking. When we arrived in the United States and I was required as a Green Card holder to place my hands on a fingerprint analyzer and have my picture recorded by immigration as we entered, my kids were a little "weirded out": they don't think of their mother as foreign. There's enough of my home in me to make me fit in easily, still, as a native there, despite decades residing in the U.S., and seem in some instances to be a foreigner here on U.S. soil. I get rid of my Philippine accent easily, though, when we're here, so I hide my native origins well - without really meaning to hide them, really.
The other night when we stood to face the Philippine flag and sing the Philippine national anthem (which I still know by heart) before a theater performance, my daughter stood next to me with hand on heart proudly gazing at the flag, and I could feel her wishing to be more connected to her heritage. Perhaps I should have done more up to this point to pass this heritage on to her; perhaps the family stories are not enough - I should have given her the language too, the ways of thinking. I think she and I will have an interesting journey together to figure this out.
We're on our way to DC to visit some friends and maybe get in on the inauguration action. Blogging may be sporadic this week as we wrestle with jet lag once again...but I'll be in touch!
Posted by T. at 12:30 AM