See One, Do One, Teach One 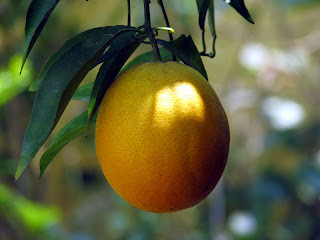 Of all the maxims that got tossed about during my medical training, the one I despised the most was "See one, do one, teach one." Everything about it annoyed me.

What I found so irritating and inherently disrespectful about it was that it exemplified so much of what I saw as the norm in medical education at the time (with a few notable exceptions): lazy teaching with an undercurrent of hazing.
Not even the biggest hotshot can do a procedure well for the first time after only seeing it once or twice, in the absence of real, hands-on tutelage (with perhaps this impressive exception). Moreover, I don't believe learners gain ANYTHING from havng to fumble through a procedure for themselves with little to no instruction. Some people argue that it helps you think for yourself, learn what not to do next time, and gain confidence. I think that's a total CROCK. Confidence comes from having been well taught and from experience.
Atul Gawande's book Complications opens with a vivid description of the first time he had to place a central line during his surgical residency. He had seen his senior resident do one, then was asked to place one himself. When his senior arrived to "supervise" the procedure Gawande and his patient had to endure the anxiety and embarrassment of her asking him, "Did you remember to check the platelets? Did you put a towel roll under the shoulder blades? Do you have the hep flush drawn up?" To which the anwers were no, no, and, uh, no.

Why couldn't she have given him a checklist of things he would need to do and have prior to the procedure, so he would KNOW? Would that have been so difficult or so terrible? No. He would have been prepared for the procedure and been perhaps more efficient and confident about it. Why couldn't she offer a little guidance while she herself was doing the procedure, and prior to his attempt? Would it have killed her to do a little teaching? Well, no, but as is so often the case during residency, she probably had a HUNDRED other things to do at the same time - just as he did - around the time he was setting up for the procedure, and she probably expected of him what had been expected of her: magical instant competence.
Many academics argue that trainees should show up knowing about a procedure already from having read about it. Again, I tell you, a crock. Try making my pie crust from me giving you a list of ingredients with some instructions. It'll never be the same as the crust you make with me showing you, talking to you, TEACHING you how to do it. And who wants to be in a plane flown by a pilot who learned how to do it by reading a manual? No thanks. I did read about EVERY SINGLE PROCEDURE I ever learned to do prior to attempting it, and no amount of reading helped me the way a teacher's attentive verbal and physical guidance did. There are just some things about the give and take of conversation, the micro-narratives contained in passing on "tricks of the trade," and the physicality of demonstration and manual adjustment that are irreplaceable.

But those things take energy, and time, and a respect for one's student, all frequently lacking in the hallowed halls of "teaching" institutions. You're supposed to show up knowing, and doing things well, and if you flub, the response is often anger. Anger at imperfections. What kind of teacher gets mad because the student has stuff to learn?
The first time an attending did a central line in front of me I asked her to talk through what she was doing so I could learn from her technique. She couldn't be bothered.
So the day before I was due to place my first central line, I brought a central line kit home, went to the home of a classmate who had already finished his cardiac anesthesia rotation, and asked him to TEACH ME how to do one, because I knew I couldn't necessarily rely on the the fellows or the attendings to do anything other than expect me to place it perfectly with confidence and without needing a lot of coaching. 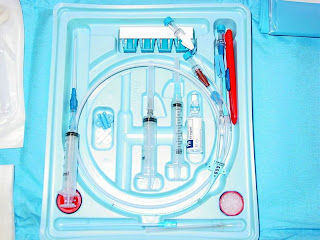 My friend talked me through every step as I opened the kit and practiced...on an orange.
"Make sure your hand's in a comfortable position pulling back the plunger on the finder needle. Good, then just imagine the distal tips meeting when you put the other needle in. Okay, you got your guidewire - make sure you watch the EKG while you're threading it. Now take your scalpel, that's right, widen that a bit but have some gauze ready so you don't ooze all over the place...dilator in...dilator out - don't let go of the wire, now...pass your line over it...there you go. Central access in a citrus fruit. You're in!"
That was SO much more helpful than the chapter I had read on central line placement. My central lines went fine.
Nowadays when I teach or guide someone through a procedure I always try to talk to the student before we go to the bedside. If possible, we go through a practice run, both for the student's comfort and for me to be able to see where the student might need a little extra help. When I'm talking him or her through the actual procedure I use a LOT of encouragement and try to give corrections in a very positive way. In other words, I try to give my students the kind of learning experience I only had sporadically during my own training (assuming, that is, that they want to learn; there's nothing that makes me harder on a student than perceiving apathy from that student).
And if my students fail at something, I try to be comforting rather than dismissive or judgmental and to share my own stories of tough procedures, bloopers, and the like. I can still remember telling a deflated OB/gyn resident in the ICU after he was unable to place an arterial line under my supervision, "Ari, I spent my entire first year missing these. We'll do another, and each one will feel easier than the last. It'll come."
Well, ok, maybe not a year. But some chunk of time. A period of time spent failing, succeeding, failing, adjusting, and finally succeeding fairly consistently. Then I was able to feel comfortable teaching the procedure. Don't tell me see one, do one, teach one. It takes much more collaboration between teacher and student - in fact, it takes relationship, however momentary - to pass a lesson on; it takes respect for the act of teaching itself, and patience for each person's learning process, and ultimately a love of medicine and patient, in order to achieve real, fruitful education - from the Latin educare: to nourish, to raise.
________________________________________________________
Addendum:  Please visit Anatomy on the Beach, where Beach Bum has written an outstanding post on medical education, making  "a firm distinction between demanding excellence of students (and being hard on them when they don't live up to expectations), and emotional abuse (characterized by personal attacks that make the student feel small and the teacher big)."
Posted by T. at 7:27 AM

Thanks for this post, I really hope I have teachers with your attitude when I get to clinical medicine. Your blog reminds me why I choose to do medicine in the first place.

Sophie, I hope you have teachers like T when you get to clinical medicine too. I had some of both.

i used to love teaching. don't do it much these days. my post of the same title was about the day that i did a see one do one teach one all in one case!!! yes there is a major problem with training supervision.

Thanks for this post. I linked it in a post on my blog, where I riff on medical education/practice and what makes it intolerable.

My first Central Line was on a Dog, Poor Guy, beautiful Golden Retriever from the "We Breed Beautiful Animals for Physiology Lab" Company..Seems there's some rule about using the Dogs from the Puppy Death Row at the Pound...

I the See One-Do One-Teach one is a holdover from when Med Schools were 95% guys, and the "Do" referred to Sexual Congress, most Real Guys HATE supervision, or reading the directions of how to do something, I mean, did you READ about how to throw a Curve Ball? Of Course not, cause you're a chick...and the kits are pretty selfexplanatory, still can't figure out what you're supposed to do with that sewing needle...tape works just fine..

I forget where I heard this, but the mantra that we passed around when we were interns was, "See One, Screw (Up) One (or more), Do One."

Irreverent humor aside, it's crazy to expect trainees to be perfect the first time they try a procedure. Especially with little sleep.