The Game is Afoot 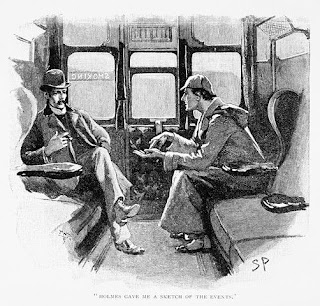 Doc Gurley put together a highly enjoyable edition of Grand Rounds this week (Vol. 5, No. 44) with a mystery theme. Please check it out!
I am using her theme choice as an excuse to mention how much I love Sherlock Holmes, "consulting detective." The 1892 Sidney Paget illustration above is from the adventure of "Silver Blaze" and is captioned, "Holmes gave me a sketch of the events." I have special fondness for this story from The Memoirs of Sherlock Holmes because it is the origin of the phrase, "the curious incident of the dog in the night-time," which in turn is one of my favorite books (by Mark Haddon, 2002). 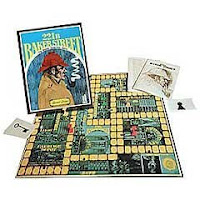 I first discovered Sir Arthur Conan Doyle's stories when I was nine (yes, I owned a deerstalker cap and the Sherlock Holmes board game). I was enthralled with the way Holmes was able to figure out just from a few shoe scrapes in A Scandal in Bohemia that Dr. Watson had been out in "vile weather" and had a clumsy maid. One of my favorite reading memories is that of being immersed in a forest green, leather-bound volume of the the complete Sherlock Holmes stories given to me by my grandmother for Christmas. I can still remember the book-y aroma that wafted up from the pages.
My favorite Conan Doyle book? The Casebook of Sherlock Holmes 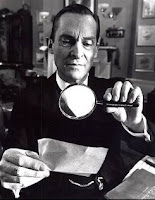 My favorite actor to portray Sherlock Holmes? The incomparable Jeremy Brett, who starred as Holmes for the Granada TV series. He is quoted as having said (commentary in italics mine), "Holmes is the hardest part I have ever played - harder than Hamlet or Macbeth. Holmes has become the dark side of the moon for me (see Mark Twain's moon quote on yesterday's post). He is moody and solitary (maybe that's why I like him so much?) and underneath I am really sociable and gregarious. It has all got too dangerous."*
My favorite episodes in the Granada TV series? "The Red-Headed League" and "The Norwood Builder." Worth a rental from Netflix.
Of course on our recent side-trip to London I had to re-visit Baker Street. I am well aware that Holmes is a fictional character; that street numbers didn't go above 100 in what would have been Holmes's time; that there's a municipal building where 221B Baker Street would be now if the numbers went in order; that the Sherlock Holmes Museum claiming the address 221B further down the the street, out of sequence, is merely an imagining of Holmes's home. The museum was closed when I was in the neighborhood (which was fine with me - I am content with my own imaginings of Holmes's London), and we didn't have a pint at the Sherlock Holmes Pub, but I did get a neat picture of the tube station - Holmes's silhouette, made of many little Holmes silhouettes. 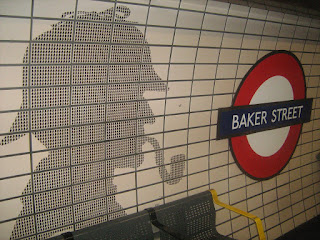 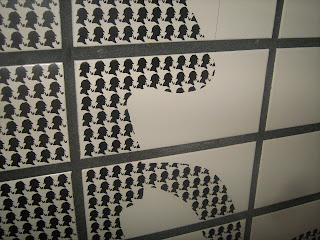 I think I'll go curl up with a good mystery on this rainy day before I have to go into work for the night. Anyone have any favorites? Agatha Christie? Josephine Tey? Ellis Peters? The Father Brown series? (I think I'm dating myself...)

Currently I'm reading Neil Gaiman's Newbery Award-winning novel The Graveyard Book - highly unusual, entertaining, quirky, impossible to put down - a must for those who enjoy ghost stories with both a little humor and some darker underpinnings.

I do like Sherlock Holmes - watched the Adventure of Wisteria Lodge last night (with Jeremy Brett - I can't see anyone else in the role now, they aren't *right*!)

The Graveyard Book is fantastic! I loved the short chapters - I could read one in the 20 minutes (there and back) on the train to and from work. Got to hear Neil Gaiman reading some of it at EasterCon (the UK Sci-fi convention) a couple of years ago. Have you read his other works?

Sherlock Holmes should have a new cast of fans when the Robert Downey, Jr. movie comes out - my boys keep talking about it! Sometimes I can parlay that into a readfest!

Jo - The Graveyard Book is my first Gaiman work, and I look forward to more!

MWAS - I cannot IMAGINE anyone else in the role after Jeremy Brett. I don't even think anyone else should try - he was just that good!