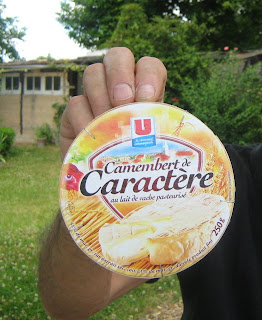 Here's another memory for the "only in Paris" category.
We had just gotten through security at the airport.  We were walking toward our gate, past the usual array of shops selling luggage, designer scarves, and chocolate.  All of a sudden an unmistakeable odor assailed us.
"What is that SMELL?! Did someone...?"
Not long after waiting ten minutes for the saleswoman at the Maison du Chocolat counter to place four tiny chocolates into a bag, between conversations with her fellow saleswoman that inexplicably could not wait until after she had finished bagging our minuscule order, we found the source of the pungent odor.
The duty free shop across the way.  It had a CHEESE section.  As if passing all the major historic sites of Paris on the drive out of the city hadn't been enough salt in our wounds, here was an olfactory reminder from Paris, which seemed to be telling us with her characteristic self-satisfaction, "Yes, here, only here, can you find the world's finest culinary delights, and you are leaving them all behind. I stink wonderfully in your general direction.  Enjoy and weep." 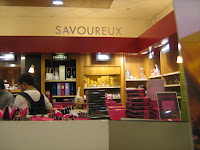 On top of that, in a final, almost iconic gesture of inexplicable, arbitrary Parisian unpleasantness, the saleswoman in THAT shop curtly hissed at me, when I tried to snatch a bloggable memento of this cheese corner, "Taking photos is forbidden!" I mean, honestly.  Why the heck should you care, lady?  Leave me alone. I took one anyway, because I can  be stubborn and defiant, but I couldn't get a really good one.
But it was soooooo typical.  Paris shopkeepers will make up a rule on the spot if you so much as get a hair out of place that annoys them.  They'll size you up to see if you're worthy of their attention.  They will look down on you if you're too sweet. They will take FOR. EVER. to do the smallest thing - wrap an item in tissue paper, top a pizza, enter information into a log book - often because they'll be chit-chatting at the same time (after all, how dare you intrude on their day by actually wanting service).  If you get a defective product, forget about returns, exchanges, or refunds that you've tried to obtain after standing forty to sixty minutes in a line that several Parisians have tried to jump.  Besides, who are you to assert their products are defective?  How dare you.  Lowly expat.
Customer service and work ethic seem totally absent in the workings of small French businesses.  As a Frenchman once said to me of his perception of the French mentality toward work, "Employment is just a vehicle for obtaining paid vacation and paid maternity leave. Why should they put in more than minimum effort when they can get a lot of benefits and by law can almost never get fired?"  I realized that the motivation, the drive, to work as hard as possible, as efficiently as possible, and always try to do better than one has done before, is very, very American.  "Your French employees would never tolerate your standards if you tried to run a business here American-style," he continued, as if reading my thoughts.
I found myself pondering these annoyances as I sat in the airport trying not to be sad about leaving.  Trying to convince myself that visiting was great, but living here would be a pain.  Would I really want to spend the rest of my days in a place where people don't seem to believe in deodorant, or shower curtains, or proper food preparation hygiene, or air conditioning during heat waves, or helping customers struggling to bag groceries at the store before the next person's groceries come rolling mercilessly down the conveyor? Where they just have to judge you by appearances, and everything has to be just so? Where the bureaucrats are arbitrary and nasty, and the red tape thicker than the Conciergerie walls?  Where a single load of laundry (about half the volume of a load in the States) takes two hours to get through a wash cycle, where nothing's open late or on weekends, where you're lucky if you can find a bathroom in a public place, much less a clean one, and where it seems people would almost rather let someone exsanguinate in front of them rather than take the initiative - rather than be bothered - to help a person who's hurt?
The truth is, I could totally see myself living there, despite all my pet peeves.  I could make a pet peeve list for any country - the Philippines, the United States - just as I could make a list of things that make those places great.  Every time I go to France to visit my husband's family, I fall in love with it all over again, and every time I have to leave France, my heart aches a little more.  I don't know that I could ever develop a true sense of belonging over there, but that has eluded me almost everywhere, so that wouldn't be such a big deal.
I wonder what makes our souls crave certain places with an almost primal longing.  I guess I'm not going to solve that mystery any time soon.  One thing's certain:  I definitely appreciated the more laid-back demeanor of the folks we've encountered back on American soil.  People live and let live over here, and it was nice to come home to that.
Posted by T. at 5:41 PM

On call today and have more time than usual to browse the blogs...Yay!

Love this post...it's so interesting how different the culture and attitudes are in France compared to here...I say that I would love to live there, but now I wonder if I really could!
Hmm...

It's somewhat more relaxed outside of Paris. I just read a story in David Lebovitz's latest book about how one of the vendors at a nearby farmer's market refuses to venture into Paris to sell his goods because he just can't stand "les Parisiens," and how in some survey, even Parisians say they find Parisians "impoli." I can totally believe it.

Could I live in Paris? No. I am too type A. I would go insane. I've never had a problem with Parisians.... but I know you're not alone.

On the other hand, some of the behaviors you describe (the chatting, annoyance at having to work) I see almost daily at places like.... oh the CVS for instance (less now that we're in a recession though). I've found that the best recourse is to stare off into space and act like you don't even notice what they're doing. They're just trying to get a rise out of you.

And then when you finally get to the counter, you can make sure to move impossibly slowly and deliberately yourself, just to get back at them. ;-)

Sounds like you've encountered all the stereotypes of Parisians. But your description of Paris would also fit most places in Asia. Good luck trying to return anything there. They're only friendly when you're buying something. If you're returning, they'll claim they never sold you that thing you're trying to return and they don't do refunds. I guess common courtesy is an Anglo-Saxon behavior, based on the rules of chivalry from old England.

Actually the center of chivalric culture in medieval times was, ironically, FRANCE (as the name, "chevalerie," would suggest).

There's a fascinating analysis of sexism/chauvinism in France in Sarah Turnbull's book *Almost French.* In a nutshell she concludes that sexism is alive and well because it is superimposed on rituals of respect toward women - a kind of modern manifestation of chivalric behaviors - and thus, because women receive at least outward respect from men, latent sexism is able to persist and perhaps even flourish.

I wasn't there long enough to sense whether her impression rings true, but it was a thought-provoking line of thinking.

I've plenty of experience of French bureaucracy and the Paris customer experience. I've even been told to "vamoosh" in a restaurant, because I wasn't leaving the table quickly enough! It can be extremely infuriating. Sometimes you have to accept that living here means having to accept these things sometimes happen. I've met some wonderful and very friendly Parisians, and some down right rude ones too; they're a mixed bunch.

Gavin - you're so right, of course. While some of these jarring incidents can stand out and be frustrating, there are indeed instances when Parisians can be lovely and kind. I've experienced both, definitely, and haven't given due credit to the latter! :)

Thanks for stopping by. I love your blog, which helps me get through the "homesickness" for France that we always go through upon our return. I especially loved your note about the paillason traumatisé! How funny - I hope your neighbor got the message. Made me feel a tad guilty for our late-night laundry loads over there...but I guess the guy practicing his "footing" at 1 a.m. in the apartment about us made up for it. :)

Hi T,
I think it's fair to say the bad experiences stick out more than the better ones. It seesm on the bad days that everybody is rude, and then you have a strange exceptional day where you meet several friendly people in succession, which can throw you off guard when you're not ready for it!

Earlier in the week I bumped into a lady in our courtyard who was exceedingly charming - turns out she was a film actress - she asked for our names (which is so not Parisian!). Living a few floors above us there is also a percussionist/puppeteer in his early 40's - one of the most chilled and friendlist people you could meet, usually dressed in bright colours, with long curly hair like Slash the guitarist.
Plenty of miserable people too, including one old guy who I always say hello to, but he usually stares right at me, mumbling something under his breath. :)

The neighbour who I thought had traumitised our mat knocked on the door yesterday, very friendly, asking if she could borrow our scales for 5 minutes (again not typical Parisian behaviour), so I now have my doubts, and no longer think they were the culprit!

I have a 3 week old baby and take revenge against any of our grumpier neighbours at 3am in the morning, with no reprisals! >:)