My Beef with the American Educational System 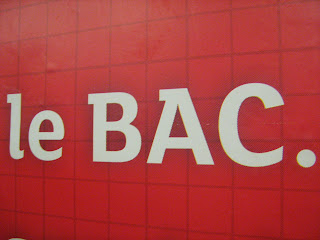 After hearing French people talk about their schooling, I am of two minds.
I think American students should be required to pass a national exam like the bac (or the British A levels) at the end of high school.  We're not held accountable for our learning at ALL in the states.  We should be able to do more than recognize an answer among multiple choices; we should be able to write about our ideas and discuss our knowledge base, such as it is, in conversation.  It's no wonder that French students who pass the bac qualify to start as sophomores in American universities.  They're just held to a higher standard, one I think we should try to emulate.
The problem with the bac as it is right now, according to the French, is that it's a bit of an elitist exam. It's not that every exam that requires some actual critical thinking and expression must, forcément, be elitist.  But the content makes it so, apparently - so perhaps it's time to revise the traditional exam.  I don't know.
I do know, from my husband's first-hand experience as well from conversations with our French relatives, that the French system can be extremely rigid, inimical to creativity, and inflexible, in that young people are shafted into a particular track early, with little opportunity for transfer should that be their desire later - either because their aptitude in a particular area improves, or because they're miserable in the original track and want to do something else.  I have the American system to thank for being pliant enough to allow an English major to attend medical school; such a path would be next to impossible in France, from what I understand.
I'm still mulling this over.  Neither system is perfect, but it's clear to me that young Americans are in some ways far behind their European counterparts in terms of responsibility for their learning.
Posted by T. at 6:21 AM

We have the regents, no?

With regards to the BAC's essay-type questions, I also believe that it's laudable that students are trained and tested on their ability to express ideas in a systematic and articulate fashion.

However, given that essay-type questions are substantially more time-consuming than multiple-choice questions, I’ve found that essay-type tests sacrifice covering the breadth of a subject adequately, while offering minimal returns on content depth. I’m also partial to the belief that critical thinking is useless without an underlying foundation of solid content knowledge -- perhaps an essay-type or oral-type exam would be suitable for advanced / post-graduate degrees, but certainly not appropriate for a standardized national examination.

NB: I’m afraid that I’m quite proud of the American educational system, and strongly believe that it does an outstanding job of achieving its primary purpose. I’m also a closet multiple-choice question fan, possibly due to excessive exposure to all those NBME / USMLE / PreTest question bank books =)

Ted - Aren't those only in New York?

And without an oral component?

As much as I hate (taking) oral exams with a passion, I actually think they force you to know your stuff, think critically about a position and be able to defend it against challengers, and be responsible for what you learn. Much harder, in my opinion, than picking a circle to shade in with a #2 pencil.

dm - I can't agree that essays and orals aren't suitable for national exams when at least one entire nation bases awarding secondary school diplomas on such questions. There's NO WAY to pass the bac without having the "foundation of solid content knowledge" you describe AS WELL AS the ability to apply it.

I also don't agree that the American educational system demands enough of its students at ALL. It's possible to get a high school diploma by just showing up and not flunking out.

T., thanks for the reply -- I quite enjoy your writing and expertise, but must step in to defend the honor of the US educational system =) . First of all, I have reservations about the claim that "There's NO WAY to pass the bac without having the 'foundation of solid content knowledge' you describe AS WELL AS the ability to apply it."

By design, essay / oral examinations are inherently more subjective than multiple-choice questions, which can allow an articulate speaker or clever wit to pass an open-ended examination without the barest knowledge of the sourced content material -- as a case in point, I highly recommend William Perry's delightful essay "Examsmanship and the Liberal Arts" about Harvard alum Metzger. Now, just to clarify, I do think that it's very important to be well-spoken and articulate, but I think that it's far more important to establish that a student has a certain baseline level of objective knowledge.

Although multiple choice questions emphasize recall and guessing in lieu of originality and depth of understanding, they do an exceptionally efficient job at testing content knowledge (see article by Walstad and Becker). Furthermore, recent advancements in multiple-choice testing techniques (i.e. USMLE-style computer-adaptive-testing) allow one to assess a student's performance within a standardized population with increased reliability and precision. In contrast, subjective open-ended tests have a great deal of uncontrollable bias, exerted from factors like, say, examiners of variable strictness.

I have no problem with using open-ended tests as an adjunct to objective multiple-choice examinations. However, I think that it's irresponsible to use an open-ended test as the primary method of assessing content knowledge.

With regards to the second claim that "the American educational system [does not] demands enough of its students", I would argue that the same can be said of *any* educational system around the world -- I'm sure that there are French students that can pass the BAC by 'just showing up and not flunking out'. I feel that the US educational system is superior to other educational systems because of its aforementioned flexibility and unrivaled opportunities -- if you take a look at the top 100 universities worldwide, the vast majority of top-ranked educational institutions are from the US. In my opinion, America is (without a doubt) the best place to get an education.

That last statement may - MAY - be true at the university level, but if it were true at the elementary and secondary school levels there wouldn't be such need for REMEDIAL writing / math / science etc. in among college and law school first-years, AND there would be a higher level of education among "educated" people.

I just don't see that, nor do the college teachers I have spoken to over the years.

But I'm glad you sent me those articles/references - I am looking forward to checking them out!

One of my big beefs with the educational system is that it is not set up to teach children how to think as much as it is set up to teach them what to think. Analytical skills and problem solving are left out of the equation in favor of simply belching up facts. Comprehension gets lost in the muddle, it seems.

Hi, RT - I agree, though my husband and I have found the system remiss with facts (esp. "math facts") as well!

One thing it CAN do well, though, is adapt to different learning styles - if you have good teachers making the system work.

I suppose I can sound curmudgeonly when it comes to education, but it's one of the things I feel really strongly about. I think people who are ABLE to learn and have the OPPORTUNITY to learn almost have a moral imperative to do so, do their personal best at it, and take responsibility for their learning.

My husband was educated in Italy, and it constantly astounds me the grasp he has of wide ranging subjects such as Latin, History, Math, English, Art, Economics, as well as Science (which is what he does). I didn't learn half of that until college. He learned all of it in high school.

He is incredibly well rounded. His high school degree actually means something. I went to a highly respected and competitive high school and didn't learn half as much.