Giselle: the ballet that gives us the Wilis 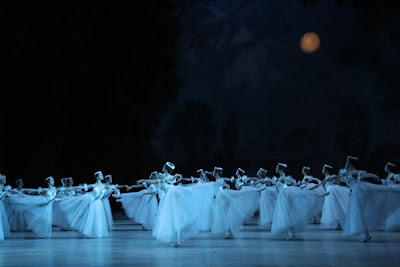 Last night I took my daughter to see Boston Ballet's world-class production of Giselle. It was superb - one of the best I've seen. The dancing and acting were first-rate, and Ricco Chicorelli's lighting - especially the spooky effects in Act II, in which the zombie-like Wilis really looked like they were specters rising from their graves and flitting eerily through the forest - made this production extraordinary and memorable.
The role of Giselle was danced by the talented Lorna Feijóo, who accomplished exactly what I hoped: a blending of contemporary ballet technique and virtuosity with the delicacy of the Romantic style, surely a result in part of her rigorous training at the National Ballet School in Cuba where, under the tutelage of the great Alicia Alonso, one of the greatest ballerinas of the 20th century and considered one of history's greatest Giselles, the discipline and artistry of classical ballet tradition has been passed on to generations of young dancers.

Let me try and explain what this ballet means to me. I have been haunted by Giselle since childhood. I have known the choreography by heart since the age of nine or ten, when I would watch a battered video of it at home almost every day and practice parts of it in the studio before and after my ballet lessons. I was quite serious about ballet then and even went to New York every summer for intensive training. Giselle was one of my dream roles - as it is for almost every young girl who wants to be a ballerina. I can probably hum Adolphe Adam's entire score from start to finish.
I had the opportunity to learn parts of the ballet directly from prima ballerina Margot Fonteyn during a master class she gave at the Joffrey Ballet School in 1987, arranged by my mom, who was very good friends with her. One of the last pieces I performed before going off to college was the peasant pas de deux from Act I for a group of elementary school kids, and the version performed by the Boston Ballet was almost identical to the one I performed in my youth - what a nostalgia trip! While I eventually gave up my ballet ambitions, Giselle will always have a special place in my life.

Giselle is one of the great classics - right up there with Swan Lake (1877) and The Sleeping Beauty (1890) - but is in a class by itself among the great ballets of history in part because it is the oldest of these, though not the oldest of all. It's like a living relic of an artistic period we can only imagine from its surviving music and poetry. It premiered at the Paris Opéra on June 28, 1841; ballet companies around the world have been performing it for the last 168 years. In addition it's been featured prominently in the films The Red Shoes, The Turning Point, and Dancers.
On the surface it is about a young girl named Giselle who has a weak heart but who loves to dance. She is in love with Prince Albrecht, who visits Giselle's village disguised as a peasant and keeps secret his noble identity and the fact that he is betrothed to another aristocrat. Hilarion, a villager who is in love with Giselle, exposes the truth in a dramatic confrontation; Giselle goes mad and dies of a broken heart. This is Act I. The fairy tale has gone horribly wrong. What else can there be? Why, ghosts, of course.
In Act II we meet the Wilis, the spirits of young maidens who have been betrayed by their lovers and who die before their wedding days. They lurk in the forest and take their revenge on the opposite sex by luring men into the woods to dance to their deaths. They murder the hapless Hilarion, who has come to pay his respects at Giselle's grave, and would do the same to Albrecht but Giselle protects him with her love and forgiveness and dances in his stead. Dawn breaks; the Wilis disperse; Giselle must go back to her grave; and Albrecht is left alone with his remorse.

It is quintessential Romantic Period stuff, complete with a score that would almost sound like the melodramatic soundtrack to a tragic and spooky silent film if it weren't so glorious. But the love story and ghost story are just part of what makes this ballet a classic; another beautiful facet of Giselle is that like the film The Red Shoes, it's a dance piece about the consuming power of dance.
Giselle is full of "classic" moments that ballet audiences recognize, and indeed look for, when they go to see it - Giselle's entrance and first dance with Albrecht; the hops on pointe across the stage during her solo; the famous "mad scene" - Alina Cojocaru's is the best I've seen; the crossing of the Wilis in Act II - a show-stopping moment (see here, time index 6:03) that usually garners applause for the corps de ballet, as it did in last night's performance; Giselle's high-speed promenades in arabesque for her entrance dance in Act II (see here or here or here); the pas de deux and Albrecht's two dozen entrechats toward the end of the ballet.
How is it that despite the fact that I know this ballet so well, and have seen it literally hundreds of times, I was still on the edge of my seat not only awaiting these classic moments but also at every thrilling turn of the story, as if I were seeing it and worrying about the characters for the first time? I KNEW Albrecht would get found out, but still my heart beat faster when Hilarion was about to blow the hunting horn and expose the truth. I KNEW Giselle would grab the sword during the mad scene and try to stab herself, but still a voice in my head warned the other villagers, "Uh oh, don't let her take that! Better get it away from her!"

I think Adam's expressive score (which, of course, has lots of great oboe parts in Lanchbery's arrangement of it) has a way of pulling us into the story time after time, allowing us to forget for a moment that as adults we're probably inclined to consider this a silly story. Instead, with the open-hearted suspension of disbelief children like my daughter still have - children who can believe in falling in love in a flash, in dying of a broken heart, and in being haunted by Wilis - we enter into the story and identify with the characters: Albrecht who wants to have his cake and eat it too; Hilarion, for whom life is not fair; Giselle who wants to believe in true love, but whose disappointment literally kills her; the Wilis who, having been betrayed by love, both fear it and hate it - two sides of the same coin - and allow their bitter vengefulness to destroy their very souls; and again, Giselle, whose love protects her beloved and whose forgiveness is redemptive.
I was browsing old ballet footage on Youtube a few days ago, rekindling my Giselle obsession, and one of the oldest clips I found was of Olga Spessivtseva dancing the title role in 1932. This is just a little bit past the halfway-mark between the first performance of Giselle and today's, making it a link to the Romantic Period, a clue to how not only this ballet but also ballet itself have evolved over the last several decades. What I wouldn't give to transport myself back in time for a while to watch Carlotta Grisi in the 1841 premiere! Giselle has withstood the test of time, and I have a feeling it will continue to haunt us for centuries to come... 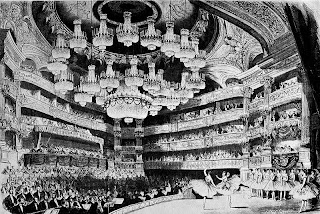