It's Coming...Are You Doing It? 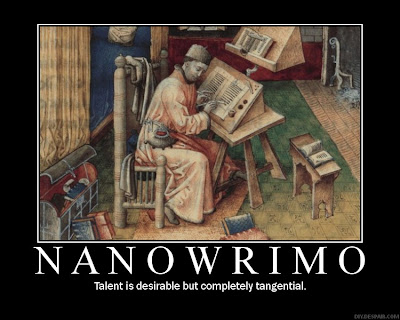 I cannot believe I never knew about NaNoWriMo until just this month.  Where have I been for the last eleven years? (Thanks for the heads-up, Fizzy! I told my fellow-blogger friend K. about it, and I think we're in!)
National Novel Writing Month was intitiated by Chris Baty in 1999 with 21 San Francisco area writers.  Now it has grown to an international month-long write-fest, with over 15,000 participants this year in countries all over the world - Australia, Brazil, Bulgaria, Canada, China, the Czech Republic, Denmark, Egypt, England, France, Germany, Iceland, India, Indonesia, Ireland, Israel, Italy, Japan, Latvia, Luxembourg, Malaysia, Malta, Micronesia, New Zealand, Norway, Pakistan, the Philippines, Russia, Singapore, South Africa, South Korea, Spain, Sri Lanka, Sweden, Switzerland, Tanzania, Thailand, Tunisia, Turkey, and the United States.
Everyone's talking about it.  Well, not quite everyone, but you can read about it
here, here, here,
here, here, here,
or here
if curious.
The rules of the game (and that's essentially what it is - a giant, worldwide game) are these:
Start from scratch - no pre-written pages allowed - and write 50,000 words of a work of fiction between 12:01 a.m. on November 1 and 11:59 p.m. on November 30.
You "win" NaNoWriMo by getting to the 50,000 word finish line.  You upload your writing to the site for word count validation between November 25 and November 30, then they purge it.  That's IT.  No one even reads it.
You don't win for writing well.  You don't win for making sense.  You don't win for writing in a particular genre of fiction (fantasy, thriller, mainstream, etc.).  All you have to do is make it to 50,000 words in the space of a month, and you can consider yourself a NaNoWriMo winner. The bar is set as low as it can go.  Quantity is far more important than quality.  No nudgy self-editing, censoring, re-writing - there's no time!  The point is to just crank it all out and worry later. (And no, I am NOT cheating with pre-written manuscript.  I'm starting with a blank page on day one - which isn't to say I'm not doing some pre-writing in my head...or even on paper...)
The whole exercise may sound pointless, but I hear it feels really great just to make it to the end and to have kick-started a daily writing habit with the pressure of a deadline but without the anxiety of having to produce good work.
So how about it - are you game? Want to NaNoWriMo with me? Eleven more days...
As they say on the NaNoWriMo website:  "Win or lose, you rock for even trying."  So I'm gonna try it this year and see what happens!
Above image courtesy of the Parody Motivator Generator at http://diy.despair.com/motivator.php.
Posted by T. at 1:47 PM

I wish I could! Maybe next year.

Me too! This will be my fourth time.

Yay!!! I'm so excited...I did that Character Questionnaire this week for 5 of my characters!!! I can't stop...hopefully, I don't lose steam in the first week...

K. - just put this on your facebook page too: Junot Diaz wrote a WONDERFUL article in O about his painful struggle to write his novel. (And timely...) You gotta read it! It's on pp. 190-191 of the November issue.

P.S. K. - thanks for posting the link to the online version of the article on FB!