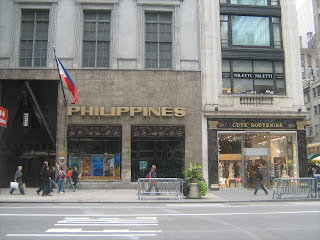 Many Filipinos have tried to do their part to help victims of the recent, devastating typhoon catastrophe that, unlike other recent natural disasters in neighboring Asian countries, has been largely ignored by the international press.
In one correctional facility in Cebu prison inmates gave up their rations as a way of contributing to the flood victims.
This foodie and blogger put her cooking talents to the service of her fellow Filipinos during what she described as her "most memorable cooking experience."
And last night, our nation's very own world-class, Tony Award-winning Broadway star, Lea Salonga, who originated the lead role in Miss Saigon and also played Eponine and Fantine in Les Misérables, gave an intimate benefit concert at the Philippine Center in New York which raised about $20,000 (about 1 million pesos) for flood victims.  My daughter and I attended, and we could not have been more proud or more impressed.
Lea looked beautiful and radiant and was totally spectacular.  Her musicianship is top-notch; her sound rich and moving, more so than ever - both lyrical and powerful; and her rapport with the audience more natural and comfortable than I've ever seen.  She is really at the top of her game - a mature artist whose interpretations are imbued with the depth of her experience as a performer, wife, mother, and woman.
Accompanied on the piano by Larry Yurman, she sang
Orange-colored Sky 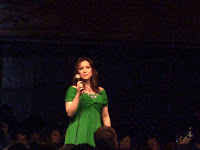 Promise Me
Hahanapin Ko
On My Own
Someone to Watch Over Me
Two Words
Gone to Soon
I'd Give My Life for You
A Whole New World
Everybody Says Don't
Encore: Imagine
I was blown away when my daughter went up on stage after Lea invited audience members to come and sing "A Whole New World" from the Disney movie Aladdin with her.  Boy, the kid has guts!  I could never do something like that. So my daughter and two random Filipino guys sang the prince's part, taking turns, and Lea sang Jasmine's part.  We're never gonna forget that!
Between this amazing benefit concert and our whirlwind visits to Rockefeller Center, Times Square, and our old stomping grounds in Tarrytown just 40 minutes north of Manhattan, we had an amazing mother-daughter trip that was well worth the missed day of work and school. New York has always been special to my daughter and me, and I plan on making memories there with her as much as I can!
Posted by T. at 6:42 PM

What a wonderful reason to visit NYC! And your daughter's memories of singing onstage with such an amazing star.

One of my fondest memories in this city was a benefit /healing concert for 9/11 at Central Synagogue by one of their members - Peter Yarrow of Peter , Paul and Mary. He, too, called the kids up onstage to sing Puff the Magic Dragon with him, and I will never forget seeing my kids up there, fearlessly singing. That was the moment I began to heal.

I used to watch Lea Salonga sing in her local concerts when I was a little girl (and she was a little girl) back in the late 70s in Manila. I would love to see her in concert or on Broadway, but haven't yet had the chance. It must have been a wonderful experience, especially given the cause at hand.
I enjoy reading your blogs. I too am a physician, a fellow Filipina, and a new mom. I was fortunately directed to the mothersinmedicine.com blog by a colleague when I was pregnant. I had asked her how she juggled medicine and motherhood, and she directed me to the blog, which has really become a type of outlet for me. I am not alone!

Peggy - what a beautiful memory. Thanks for sharing that!

Valerie - I was a little girl in Manila in the 70's too! Thanks so much for stopping by.

Thanks for inspiring me to become a good role mother to my 2 daughters. Though I am not the physician in the family (hubby is), I can say that you are doing a wonderful job overall as a mom, wife, and as a person in your profession who helps those who are in need to get better. It's difficult enough to stay home and raise a family, how much more with somebody in your stature. Where do you get your energy?
I enjoy reading your posts and I always close your page either with a tear in my eyes from nostalgic stuff in your notes, especially if it pertains to the Philippines and fellow Filipinos and their sad plight back home, or you just simply keep me thinking about issues that you touch, even after leaving your page.
Thank you.

Dear Santa Santita - Maraming salamat naman! Your kind words really moved me. I'm blessed to have a loving family - husband, children, parents, in-laws - to sustain me and give me the energy and support I need to pursue the work I love - parenting, medicine, writing, cooking, music, dance...

So glad you stopped by. Thanks again for your kindness!