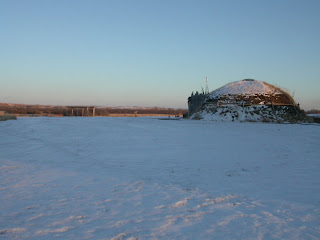 Elaine Fine, who writes the blog Musical Assumptions, sent me the following meme/game today:
1. Pick up the nearest book.
2. Open to page 123.
3. Find the fifth sentence.
4. Post the next three sentences.
5. Tag five people, and acknowledge who tagged you.
So here are the three sentences I found in the book which, in a roomful of books, currently seems to be occupying the spot closes to me:

"I couldn't articulate it then, but I was writing my way out of a former North Dakota, the seven-year span with my parents, into the space I would occupy as a young man.

The elm in the furnace bubbles, still juice, and I wade to the garage-granary in the rising wind, a hand up to ward it off, and go to a pile of oak one-by-fours I've saved for a furniture project and sigh. I load the staves in my arms and head for the furnace through the wailing white."
These were penned by North Dakota poet laureate Larry Woiwode in his memoir What I Think I Did: A Season of Survival in Two Acts. Even his day-to-day chores evoke for me a writer's life - every act a metaphor, an incarnation, of the mind-spirit labor of the creative process, of noticing the world in a particular way, of being and becoming a writer and dealing with the "wailing white" of an empty page, arms sometimes loaded with staves and sometimes empty.
There are a few special teachers in my life whose hope in me I feel I've betrayed, by going to med school instead of living a life in art, be it dance or writing, or by choosing the field of medicine I've chosen despite the promise of other areas, like pediatrics. He is one of them. Over a dozen years ago when I was sitting in a writing workshop he led at Cambridge University, his faith in my voice was a gift. It was as if he had laid a blessing hand on my lips and ears, my eyes and my mind, and said "Ephphatha: be opened." I would carry the experience of that workshop with me long after it was over...and perhaps it is alive in some way still as I go about my "day job" hoping to be of help to a few patients. I hope so.
Posted by T. at 9:16 PM