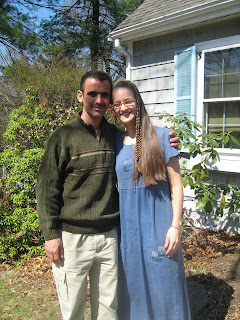 I have to talk about it. I can't not talk about it.
Underneath all the daily routines, the anesthesia work, the chopping of vegetables for dinner and the making of to-do lists, something emotionally important has happened in my life.
I have a new friend.
This is someone I've been waiting to meet and to embrace for years, and he has just arrived in this country and married one of my dearest friends, a heroic woman I've looked up to since I met her in college and who is, I think, one of the greatest souls alive on this earth.
I have to gush about her first. Sheila sang at my wedding. She sings like an angel, writes like a Pulitzer-prize winning author, and is pure grace and and athleticism on a pair of roller blades or on a soccer field. She is one of the most intelligent and articulate people I know. She is kind and generous and deeply spiritual. She graduated from Harvard with honors, has an advanced degree in theology, spent years doing humanitarian work with Christian Peacemaker Teams in Iraq, and now speaks fluent Arabic. She applied to medical school under great personal stress (due to her problems trying to negotiate Thaer's safe passage to the U.S.), did exceedingly well in her premed classes and on the MCAT despite these stresses, and will begin her medical career at Harvard Medical School this fall. She's my hero. I imagine the people around in her study groups, anatomy lab, hospital rotations, etc. and wonder what would happen if they, especially the senior residents and faculty, truly realized they were in the presence of a human being who is greater than most. I really believe that. But she's so humble you'd never guess, unless you got to know her. Sheila is a being of light.
Sheila met Thaer while she was with Christian Peacemaker Teams; CPT workers accompanied Palestinians who were fleeing persecution in Iraq to camps on the Syrian border. They fell in love and got engaged. Thaer is an artist and had been a leader and humanitarian activist in his community of Palestinians living in Iraq, with no citizenship and few rights. He has been trapped in refugee camps, caught in legal no-man's-lands of displacement and unimaginable deprivation, imprisoned and tortured with beatings and simulated drownings, and endured sufferings that I may never be able to comprehend in a lifetime. For years Sheila and Thaer have fought through a jungle of catch-22's and horrible conditions that have kept them apart. Then Thaer was able to escape through Turkey to Greece on a boat filled with refugees - a cramped, three-hour voyage across the sea filled with mishaps and fear. By some miracle, despite a mountain range of obstacles that had been preventing his immigrant visa to the U.S. from being completed, he and Sheila prevailed, his visa was approved, and he is now here, safe and sound, with my dear, dear friend. They were married yesterday.
When I met him last Saturday for the first time I threw my arms around him and wept. He is every bit as gentle and sweet as I imagined from my conversations with Sheila about him. He's a wonderful story-teller (even with my embryonic Arabic I could tell!), with a great sense of humor and a visible spirit of joy with the children who were at the same gathering. It's easy to see why Sheila loves him.
I have been given amazing friends from whom I have much to learn.
Posted by T. at 10:15 PM

You have some of the most amazing stories I've ever read. Thanks for sharing.

BTW, your sad story about the "worst story you've ever heard" kept me up for nights. I just couldn't sleep. I prayed for the woman. There's not much I can personally do, but I prayed. I will never forget this story since it supports a belief that I have that God will intervene for those who pray for deliverance. He will speak to who-ever will listen, even if it happens to be George W Bush. I believe the young girls on their way to the rape rooms prayed. And their momma's prayed. God moved thousands of people to deliver them. It's my personal opinion, but that's what I believe.

Kathy, I feel TERRIBLE that I disturbed your sleep!

Thank you so much for your presence and support.

There is terrible suffering in so many parts of the world, and I feel so many of us are so sheltered from it, people like me most of all, despite my involvement in health care.

I admire people like my friend Sheila, who look upon its face, reach out and touch it, live in it, suffer it themselves.

And I derive hope from people like her husband Thaer, who, having endured it, still have the grace and heart to have faith in love and to fight for peace, to smile with joy, and to say with genuine thankfulness, "mash'Allah."

And I think your generosity and warmth towards others is pretty amazing. You are a role model yourself, you know.

I, too, waited for years to embrace this newest member of our college family. I can't wait to dance in celebration with Sheila and Thaer!

As I was listening to a favorite CD of a few years ago with my little one, this song came on and I heard it with new ears:

Lee, I was totally moved and awed and embarrassed and humbled by your words when I read them here this morning. Embarrassed, because I have been reticent on this blog about my many faults and failings: the way I get snappish when tired or stressed, my not-always-fair judgments, the ways I sometimes stumblingly handle conflicts I witness or am part of...the list goes on and on. But thank you, truly; I will strive to live up to the more positive self I discover/uncover here, with help from this small community of supporters.