How a "Humble" Task Taught a Humbling Lesson 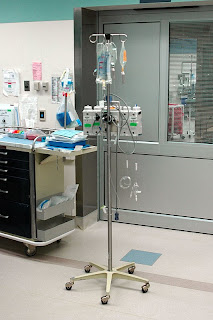 I liked your story. I am from Boston (born in Newton). I an a graduate of Northeastern Univiersity and have been an RN for over 22 years. Always being down to earth and professional at the same time. Everyone is important and deserves respect. That's what you show me in your articles. I have been on both sides of the fence (double transplant 10 yers ago- kidney/pancreas). I did rotations at many of the hospitals in Boston as an RN and sometimes a patient (mostly Deaconess/ Joslin ). Thanks for your Blog....more people in the medical profession should be a bit more "humble"...Lisa M. Raco. :)LVLMI@aol.com

The stuffed animals waiting on the stretchers often bring me close to tears. Both because of the sick children, and because it reminds me of that simple comfort of childhood, forever lost to us grown-ups.

Lisa, thank you very much for stopping by and for your kind support.

Sterileeye - for me too the sight of those stretchers with waiting teddy bears or what-have-you would bring that catch in the throat, the "pre-weeping throat." But I have a confession to make: I haven't allowed the comfort to be quite "forever lost" in my life - I was one of those who brought a favorite stuffed animal (or two) to my college dorm way back when, and recently I just got an adorable stuffed moose supposedly for my daughter but we all know the truth...Capuccino Moose is miiiiiiiiiiine... :)

Hi mommy! You were just kidding about the Capuccino Moose thing, right?

Maybe this is something they teach in med school, but a boy can have a uterus?

A longer answer:
In another life, when I was going to be a pediatrician and not an anesthesiologist, I had a special interest in medical genetics and in variations in sex development and their psychosocial impact on gender identity. There are several medical conditions that fall into a category of uncommon but known variations in sex development. Different medical terms have been used for these conditions and some of the ones I learned in school - "ambiguous genitalia," "hermaphroditism" and "pseudohermaphroditism," "gonadal dysgenesis," "dosage-sensitive sex reversal,"and "embryonic testicular regression" - may have fallen out of use by now (or not). I haven't kept up with those details of pediatric endocrinology and genetics, unfortunately.

I don't remember exactly, and this speculation is from ancient med school notes gathering dust on my shelves, so please know that the following may be innacurate, but I think the boy I took care of may have had one of the following conditions: dysgenetic male pseudohermaphroditism, in which a person has a male genotype (46 XY) but also has a uterus, a vagina, testes, and incomplete external virilization; or mixed gonadal dysgenesis, in which a person is genetically what would be called an XO/XY mosaic and would also have a uterus, vagina, testes, and incomplete external virilization.

If there are any genetics and endocrinology experts out there who are a little more current on the topic than I am, please feel free to chime in!

One of my away rotations had residents doing all their IV set ups - priming and getting the tubing ready, etc. I understood how easily it was to forget to check if you'd primed the line, or if there was something not hooked up correctly the first time how that could delay induction and add to patient anxiety. I feel it's these things that make a great physician as opposed to just a competent one.