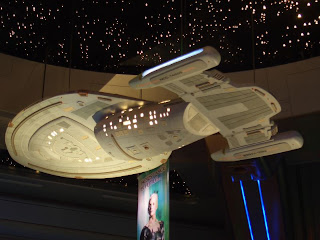 All right, I'll admit it. I have vices.
One of them is watching re-runs of Star Trek: The Next Generation and Star Trek: Voyager. Cheesy escapism at its intergalactic best. Did I mention my husband calls me Super-duper Dork?
The painstakingly literal, ultra-rational, emotionless character has become a series cliché. I especially enjoy the blunt pronouncements of Seven of Nine in Voyager, though I can't even say she's one of my favorite characters. Brutally honest she is, though. This is a woman who tells it like it is, who described her first lobster ever, served to her during her first date, by declaring in her typical monotone: "This creature has an exoskeleton." That's exactly what goes through my mind when my dinner companion orders one! (Though without the exoskeleton - say, slathered with dressing in a lobster roll, or on a bed of greens, or better yet, simmered in a delectable bisque - lobster suits me just fine.)
Today's quote from her was another example of her priceless candor. When Neelix, a member of the crew, comes to her for a pre-arranged singing lesson, she decides the lessons should actually be discontinued. When he protests that he had been looking forward to the lesson because he has been practicing, she tells him,
"In your case practice is irrelevant. Your vocal chords are incapable of producing basic diatonic tones."
Poor Neelix.
I have a more optimistic view of practice, be it musical, medical, or spiritual. In medicine the obsession with evidence-based practice sometimes reaches the point of absurdity - we need studies to prove that sleep deprivation affects performance, or that skill practice in simulators improves it. Human experience has shown us time and time again, however, that frequent use and repetition make something easier to do and do well, whether it's placing a central line or speaking a foreign language, playing an arpeggio or consciously converting uncharitable thoughts into appreciative ones. I don't need a study to teach me that.
I learned something startling about practice recently. I read in Oliver Sacks' book Musicophilia that mental practicing can be as beneficial as actually sitting down to do scales. I couldn't believe it. Could it be that having the brain fire those signals down the same command pathways actually created the same connections and reinforcements established by praxis, the physical act, the doing of something? Was mental rehearsal more than just superstitious, wishful thinking?
At my last oboe lesson Kyoko confirmed that I had indeed made headway with my embouchure. She was pleased with my incremental progress. "You've been playing," she said.
"But I haven't been playing enough!" I protested. "My schedule's been crazy lately. I don't have time to practice every day. Sometimes all I can do is IMAGINE that I'm playing. And I do. I'll sit there and go through all the motions in my head."
"Well, it helps," she said. We did some reed work, long tones, and anatomical verification that it was indeed the very tip of my tongue I was using agaist the reed. At the very end we played some passages of Corelli and started work on Gabriel Marie's La Cinquantaine. It was a productive lesson.
So Sacks was right? I think that's cool.
Posted by T. at 4:35 PM

Love your writing. It was interesting to read your sensible criticism of studies which show us what we already know. I just posted an article about Western science and Chinese medicine in which I posit that our reliance on RCTs makes it more difficult to answer the most basic questions about how people heal, and thus to advance from mechanistic medicine. Your comments seemed apropos. Thanks.

Kyoko is absolutely right. It is simply playing that makes you improve. It builds up the muscles that you need to make playing easier, and once those muscles are working well, you will be able to work on the next level of physical development.

A friend of mine once said that those people for whom playing seems easy really do find it easy to play. I know that the oboe is never actually easy to play, but it will continue to become less difficult the more you practice.

Star Trek is one of my favorites to pass the time...especially Voyager and Deep Space Nine. Never could get into Enterprise though.
I used mental practicing while learning American Sign Language, imagining watching someone sign as well as signing myself. It gave my hands a break! Very effective.
Great blog!