My Other Favorite Instrument 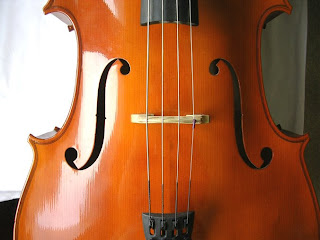 Mr. Phil, a balloon-making entertainer, was chatting with us at the local diner last weekend and figured out that we all play musical instruments. While he was making the penguin balloon my daughter requested, he went around the table asking us what instruments we played.
My husband plays guitar.
My daughter plays the piano and composes, but she'd rather be singing. She was pleased to be able to join us adults in her first adult choral piece last Saturday by sight-reading with the sopranos.
My son sat up straight and tall when his turn came and announced proudly, "I play the violin."
"What kind of balloon would you like?" Mr. Phil asked him.
My son thought for a moment. "Can you make a pterodactyl?"
To our surprise and delight Mr. Phil replied, "I sure can. Purple ok? Brown's too boring."
Then Mr. Phil turned to me.
"How about you? What do you play?"
"Guess," I said.
"Hmm...you have a bit of the 'earth-mother' about you...I would have to guess cello."
I think what he was actually suggesting was that I was plump, but I couldn't complain. I LOVE the cello. I love the richness of its voice, its ability to lend both beauty and grounding to a piece, its deep expressiveness. But I had to tell him I was learning to play the oboe, which he opined had a comparable role among winds despite its much higher register - a special voice, one that could express the music in versatile, emotionally compelling ways either with a principal melody line or as a rich undercurrent. I liked his line of thinking. Cello passages started to waft through my head...the adagio from Act II of Tchaikovsky's Sleeping Beauty; lines from Vaughan Williams' Fantasia on Christmas Carols; the Bach cello suites.
Recently I heard this NPR feature on cellist Rufus Cappadocia (totally worth a listen!). I was completely enthralled by the places this musician could take his instrument - incorporating sounds from all over the world (including much of the modal music I love so much), even modifying his cello by adding a fifth bass string to maximize its versatility. His music brought together sounds from Sufi and Middle Eastern music, flamenco, blues, Gregorian chant...I felt like I was listening to creativity itself made incarnate through his playing. I found his track "Prayer" particularly haunting. His music, slow or fast, makes me want to dance. I'm going to have to put his CD Songs for Cello on my birthday wish list...and the video for his piece "Transformation," which includes a dancer, below.
I will never be the virtuoso that talented musicians like Cappadocia are, who can use their instruments so skillfully as truly one-of-a-kind voices with fresh ideas to express, but I am so inspired by them and the music that comes from the work of their hands and minds. I am still working on Gabriele Marie's La Cinquantaine, and last Monday Kyoko added Solveig's Song by Grieg to my homework assignments. It's like learning a language. The trouble is my patience (or lack thereof): whether it's speaking something new or playing music, I want to be fluent, like, YESTERDAY!!!