The Worst Story I've Ever Heard 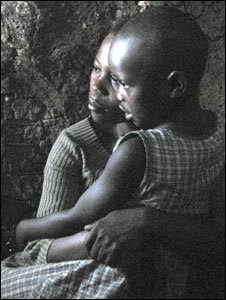 Zawadi.
Zawadi Mongane had 4 children. She lived in a village in eastern Congo.
The Interahamwe, Rwandan (Hutu) rebel soldiers who fled Rwanda after participating in the 1994 genocide, captured Zawadi, her brother, three of her children, and about 50 other people from their village.
They were brought to an isolated rebel camp where the village leader and all who were related to him were asked to stand up. Those who were standing were murdered on the spot. Literally. Right where they were standing.
More and more people were killed in the days that followed. By the end only Zawadi and another woman were left alive.
During those days the rebel soldiers ordered Zawadi's brother to rape her.
He refused. They decapitated him with a machete.
Zawadi had to watch as two of her children were killed before her eyes.
Zawadi was gang-raped by 19 rebel soldiers.
But this was not the worst thing that happened to her.
Zawadi was carrying her little baby on her back. The soldiers tied a rope around her baby's neck and forced her to pull the rope, hanging and strangling the baby until it was dead.
She would rather have died than have had to kill her own infant child, but she had another child, one who had not been abducted, one who was waiting for her, if she survived. "I had to stay alive for her, " Zawadi says.
Now physically debilitated because her pelvis had been shattered by the violence of the rapes, living in a slum as a social outcast, and psychologically destroyed, Zawadi barely makes a living as a porter and feels her 5-year-old little girl is living with someone who is as good as dead. "I get nothing out of life," she says. "I can't see anything in the future."
They cannot go back to their home village because Zawadi is afraid. She fears she will be raped again. And she knows her little girl is not safe; Zawadi has seen the same violence committed against even younger children. She is terrified that her little girl will fall victim to the people committing these atrocities - committing them right now, as I write this, as you read this, as your loved ones rest in your home or play in your yard, or browse in a book store, or sip coffee in a coffee shop, or moan about their work days, as I've been guilty of doing lately. 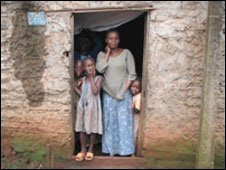 These photos were produced by the BBC and can be found at http://news.bbc.co.uk/2/hi/africa/7340074.stm.
This has been going on for over a decade.
Panzi hospital in South Kivu has become the region's go-to place for reconstructive surgeries for victims of these atrocities.
Just as the generation before us is often criticized for sitting silently by as millions of Jews were exterminated by the Nazis, perhaps we are the generation that will collectively be held in disgrace as we sit stupefied while the people of the Congo, Sudan, Afghanistan, and Iraq literally get torn into shreds inside and out.
I can't help wondering if our spoiled, sheltered existence is going to come back and bite us in the rear. It's already starting to ecologically...and I don't think we can be dismissive about the number of geopolitical tinder boxes dotting the globe (Iran, Pakistan, Tibet, Kosovo, North Korea...)
Anesthesiologists are obsessed with making preparations for contingencies. But how can I prepare my children for THIS mess? Did our parents worry about the Cold War like this? Are these just the same thoughts every generation of parents has?
_________________________________________________________
Addendum 4/11/08:
Check out this post at Beyond Rivalry which mentions Zawadi's story but focuses at length on the journey of another woman, Etty Hillesum, a Jewish woman whose letters and diaries from her experiences from 1941-1943 offer much food for thought. The post is an eye-opening, humbling, astonishing, instructive, and well-written reflection on the mystery and reality of human suffering.
Posted by T. at 12:41 AM

Horrifying. I feel absolutely dreadful knowing that this continues, but must confess that I don't know what can be done. Anarchy in every aspect seems to be the only tried and true virtue in many of these countries - and those who do lend help often end up being forced out or killed themselves.

I agree with you, though, about watching the genocide yet again. We've seen it happen over and over, with the irony of the Holocaust's message "never again" still being echoed in classrooms.

Hi - people ask 'what can you do?' - well one thing you can do is pressure your governments to do more to tackle these issues that really matter. I find it difficult that we seem to view some people's lives (Westerners) as more important than others (like Zawadi) Having lived and worked in Rwanda for the last 2 years and in West Africa before, I feel a part of this community, and truly, we just have to understand that Zawadi is just like us. Not other. The same. Check out the work of this organisation:

They work to support victims of genocide and advocate for an end to genocides world wide. They also educate about genocide - a real attempt at 'never again'. Do support them if you can.

These are exactly the stories I hear every day at the refugee clinic.

Man, that was hard to read.

On a related note, one of the best books I've ever read on suffering and evil is How Long, O Lord? Reflections on Suffering and Evil by D.A. Carson.