I've vented before about how annoyed I get when people ask me if I get to leave the operating room once I've induced anesthesia.

When I inject the anesthetic into someone's vein my job is just beginning.

It actually begins even before I meet a patient, when I go over the chart and history to be sure I have the information I need to keep someone safe.

If I feel reasonably good about bringing patient this far: 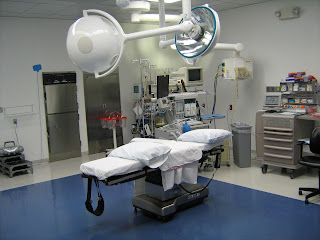 Then I can usually be reasonably confident that I can get the patient through this: 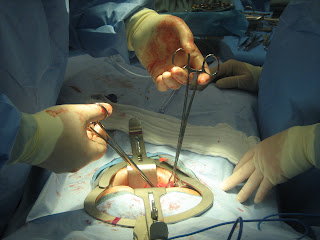 But even with every known precaution taken, sometimes the trouble starts here, in the recovery room, or PACU (post-anesthesia care unit): 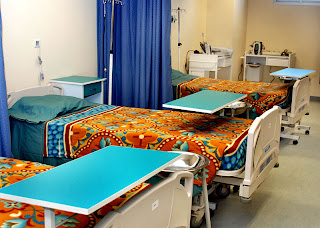 Recently I arrived at work at about midday for an overnight shift and was paged by one of the PACU nurses because of a patient with low blood pressure. I made some preliminary recommendations and said I would be over to see the patient shortly. As I was wrapping up what I was doing there was another page. Things had taken a turn for the worse just minutes later. The patient's blood pressure was alarmingly low, his heart rate unusually high, and he was reporting chest tightness.

I ran to the PACU, examined the patient, scribbled through a quick calculation for the rate of infusion of a drug, and ordered the pressor - a medication to boost and sustain his blood pressure - to give me time to assess all the variables and figure out what the heck was going on. What was this - dehydration, a heart attack, acute heart failure, or something else? I asked questions about his cardiac history, looked at old cardiac tests, ordered a few others. He told me he was feeling a little short of breath. His oxygen saturation was dropping. Without supplemental oxygen, in fact, it plummeted to alarmingly low levels, yet his lungs sounded clear. Even on the pressor, his next blood pressure was abysmal. I took the nurse aside.

"This is a P.E. [pulmonary embolism]. Looks like one, feels like one. We gotta call the hospitalist, get a scan, send him to the ICU..."

"They're gonna have to MAKE room."

There was a flurry of activity as the appropriate people were called and arrangements for transport were made. Some time in the midst of all this I clasped the patient's hand to explain what was happening. He clasped my hand back, tightly. After explaining my line of thinking, what I was concerned about, and why we were taking the measures we were taking, I told him we would get him through this. The hospitalist arrived and eventually took over his care, and brought him to the ICU.

I visited him and his family in the ICU the next day after my overnight shift was officially over. He was on a heparin drip (for pulmonary embolism) and doing better, with a normal blood pressure and improved oxygen saturation on minimal supplemetal oxygen. I stayed with the family for 20 minutes or so, to answer questions and just talk.

No one should ever say that anesthesiologists don't spend time, important time, with their patients. In behind-the-scenes, "restricted" areas like the PACU and the O.R., often during moments unseen or unimagined by family members who are stuck waiting outside, we do, and that time does matter to us.

Wow... This is a classic scenario for PE. I'm a first yr med student at and this is what we have been drilled so far.

Thanks for raising our awareness again T! That was quite a scare.

(I have to confess, when I saw your opening about "venting," I thought you were going to go for a laugh.)

In the ICU many of the critical care docs understand just how important anesthesiologists are in managing acute events. I constantly hear about how I'm going to be an expert in a few months getting lines and intubations in patients (actually a lot longer, but what the hell?) and it makes me happy to see that someone in the hospital actually gets it.

1st-year-MS: glad you're already discussing clinical scenarios! I found later on that although the case studies we discussed in our first two years were different in pace and sequence from the tension and active managing/decision-making of real life, they were a valuable foundation for sure.

Anali - thanks for reading this one! In the back of my mind I always have the thought that surely no one wants to hear me "vent" about my work-day situations, but doing so does offer me time and space to reflect about the work itself, so I thank you (and anyone else who reads here) for your indulgence!

Bardiac, great to see you as always. I do think it's high time for a lighter moment on this blog, but I find if I do inspire laughter it's usually by accident... :)

MSG - that's because half the ICU docs ARE anesthesiologists! LOL! I wish American hospitals/programs would emulate the Europeans, who often call their anesthesia depts "Department of Anesthesia and Critical Care." It IS what we do (I wrote a whole thing about that once, elsewhere - maybe I should post part of it some time). In France I think the moniker is "Anesthesie-Reanimation": Anesthesia and Resuscitation. THAT's a true description of what we're really about!!! (BTW, congrats on the Match!)