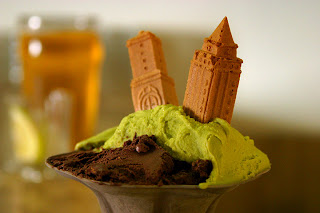 Paul Levy, I'm gonna have ta kill ya! (She writes, entirely facetiously, of course.)
I went to Russo and Sons in Watertown today, or Russo's ("the food lover's food store"), as it's more commonly known - only the best food market EVER - because of you, and there I tasted gelato master Eduardo Kreindel's pistachio gelato (and of course bought a basketful of other goodies), and now I'm an ADDICT! A bona fide, pistachio gelato ADDICT!
And Russo's won't get another batch in till Monday! Am I on call?! Paul! What have you done to me?! :) 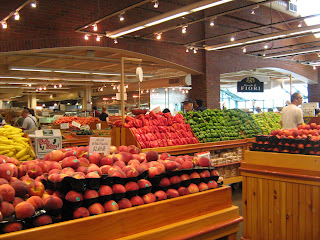 (The interior of Russo's in Watertown, where you can get fresh produce, artisan cheeses, delectable pastries, delicious deli meals...and the best gelato this side of the Atlantic, all for about a third of what you'd pay at the other fresh food market. It's a food-lover's wonderland. So, not surprising to those who know me, I had the cheery holiday song "Winter Wonderland" stuck in my head (a little wishful thinking, perhaps, in this weather) as I wandered down the aisles following my nose toward the freshly baked amaretti cookies, with a linger at the salad bar to sample some sun-dried tomato vinaigrette over fresh greens and vegetables...)

***
Gelato has a special place in my heart.
I fell in love for the first time over gelato. In a corner gelateria in Florence at the northern end of the Ponte Vecchio (Duomo/Signoria side). Ah, the folly of youth... 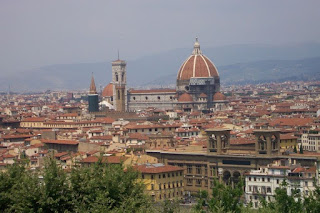 But that was then. Here and now, I have a highly pertinent quote regarding pistachio gelato, from an NPR food article (emphasis mine):
"Pistachio gelato is the benchmark by which many gelaterie are judged. You can tell at a glance if an artificial base has been used, just by the color. If the gelato maker is using real pistachio nuts, the color will be an almost drab green. If the bin flashes a neon green, keep walking!"
Needless to say, Eduardo's (which goes by the name Giovanna Gelato) was a very pale shade of pistachio green, and tasted all-natural, without that over-bearing almond-extract taste with which so many ordinary ice cream manufacturers overwhelm their pistachio ice cream. Nutty and delicious!
*** 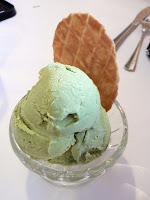 For all gelato lovers out there and for those in the Boston area who can't get to Russo's and are withering in the current heat wave, here's the recipe NPR quotes from Gelato! by Pamela Sheldon-Johns, Ten Speed Press, 2008 (other recipes here and here):
1 cup (6 ounces) shelled pistachios, lightly toasted (about 12 ounces in the shell)
3 cups whole milk
3/4 cup sugar
In a food processor or coffee grinder, coarsely chop the pistachios, reserving a few whole ones for garnish. In a medium saucepan, combine the milk and sugar. Cook over medium heat, stirring until the sugar is dissolved, and bubbles form around the edges of the pan. Remove from heat, add the pistachios, cool, cover, and refrigerate overnight.Strain the milk mixture through a fine-meshed sieve, pressing on the nuts with the back of a large spoon to get as much liquid from the nuts as possible. Transfer to an ice cream maker and freeze according to the manufacturer's instructions.
Stay cool!
_______________________________________________________
Addendum for locals: tonight we went to Rancatore's and tried their ginger snap & molasses ice cream. SOOOOOOOOOOOO good! A pleasing medley not only of flavors but also of contrasting textures, creamy with softly-gritty. YUM! 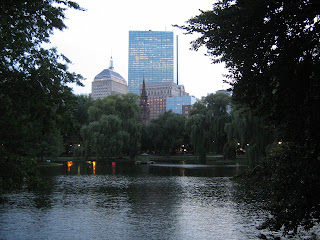 BTW, I prefer the gelateria in Florence that is two bridges down from the Ponte Vecchio -- the Ponte Alla Carraia (on the Pitti Palace side of the river). Just on the right as you cross the bridge.

And, Eduardo will sell you gelato direct, if you buy big enough quantities. It sounds like you should . . .

Thanks for the gelateria tip! Can't wait to treat the hubby & kids if we make it over there one of these days...

Looks like I'm gonna have to get me a special little freezer for a stash of Giovanna Gelato...! :)

I know the place Paul suggests and it's one of the best. My wife and I found another one that's worth a visit. Here is the link http://www.gelateriademedici.com/

Thanks for the info, Dr. Ban! I gotta get back to Florence somehow and check it out. What a magical city...