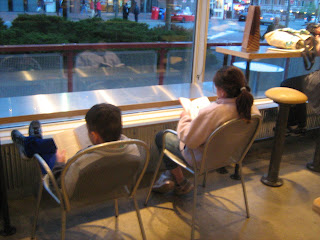 I'm taking a little time off this week for a much-needed break way from the usual pace of work, putting dinner on the table, getting mundane errands done, etc. A pause at the Well of What's-not-bread-alone. A luxuriation in the things that nourish my spirit.
And one of those things, of course, is BOOKS.
I once entered a beautiful home and felt strongly that something was missing. The living room was lovely. The kitchen was a dream, spacious and attractive. There were lots of windows to let in natural light, morning and afternoon. But where were the...books? A well-to-do home with no BOOKS...?! I went back to my humble little house, looked at my book shelves, and thought to myself, now this, THIS, is a home. Nothing Architectural Digest would be interested in, but a cozy little place where my children and I can be enfolded in the aroma of bound pages and the vibe of stories all around us. It was the same feeling I'd get whenever I walked into a kitchen with fresh vegetables brimming over in baskets and saucepans filled with goodies simmering on the stove. I'd feel well-fed even before sitting down to the feast.
I've started my summer reading on this very day. I probably won't get through this whole list by autumn; work life always tugs me away. But I'd like to!

I start with Walking the Wrack Line by Barbara Hurd. This woman's prose is breathtaking, almost literally: the writing breathes, in and out, up and down, and its beauty does take the reader's breath away. It has rhythm and cadence, used wisely and naturally - as befits a nature writer, in the great tradition* of Annie Dillard or Loren Eiseley, and the literary and scientific writing of Lewis Thomas. It makes you want to read her words out loud and savor them in your mouth, be slowly transformed by the way they lap like waves at the edges of your mind. An example: "Underfoot that day was the usual medley of seaweed and shells, bits of plastic and driftwood, the ordinary ravel of wrack line every high tide leaves behind." Then, in the next paragraph,
Out in the harbor to my left, a dozen small sailboats practiced their maneuvers, tacking port then starboard in choreographed glissades of clean white triangles. Like sailors everywhere, they must have studied the jetty and shoals ahead and laid out a course to avoid them. Behind me, the narrow streets were crowded with sunglassed people who wove between slow-moving cars and children with ice cream cones. Wandering on the beach, I watched an object out in the waves, spent twenty minutes trying to figure out what it was. It hadn't bobbed so much as ridden, appearing on the top of a wave, disappearing behind it. Its rhythmic lift and sink had made it hard to identify - large fish? a log? a swimmer's rubber flipper? The closer it got, the flatter it looked, floating like something wooden, and by the time the skim of water twirled it clockwise and left it in the jumble of wrack, I could see it was a plank of some sort, a crafted thing, not a limb or something drowned, and then, finally, that it was a broken oar.
This passage is a microcosm of the process she as a writer and we as readers experience through this book - the gradual deciphering of a bit of knowledge or wisdom through ever-sharper observation of minute details, some beautiful, some astonishing, accumulating into a broader meditation on what washes ashore for all of us, "what might be rescued - from near destruction, from invisibility, from silence." I will finish this gorgeous book by tomorrow.

After Hurd's book I may stay near the water, so to speak, and turn to Exiles by Ron Hansen - a fictional exploration of the literary and spiritual struggles of Jesuit poet Gerard Manley Hopkins as he tries to make sense of the wreck of the steamship Deutschland, a vessel which had been carrying five young nuns who were bound for a new life in America because of Bismarck's laws against Catholic orders. I've been awed by Hopkins' poems since high school, when we read "As kingfishers catch fire..." (reproduced below). I never really thought about his inner life, though, and look forward to seeing an imagining of it, from an author who considers imagining an act of prayer, and who can use the words "anesthetic," "chamber pot" and "snowflakes" in the first paragraph alone.

As kingfishers catch fire, dragonflies dráw fláme;
As tumbled over rim in roundy wells
Stones ring; like each tucked string tells, each hung bell’s
Bow swung finds tongue to fling out broad its name;
Each mortal thing does one thing and the same:
Deals out that being indoors each one dwells;
Selves—goes itself; myself it speaks and spells,
Crying Whát I do is me: for that I came.

Í say móre: the just man justices;
Kéeps gráce: thát keeps all his goings graces;
Acts in God’s eye what in God’s eye he is—
Chríst—for Christ plays in ten thousand places,
Lovely in limbs, and lovely in eyes not his
To the Father through the features of men’s faces.

I'm intrigued by descriptions of Sebastian Barry's book The Secret Scripture, a novel about a 100-year-old mental patient who starts to reflect on and write about her past and hides her manuscript beneath the floor boards of her room. Meanwhile, a doctor is in the process of reevaluating all the patients in the ward - including her - to see which ones might be released back into the world... 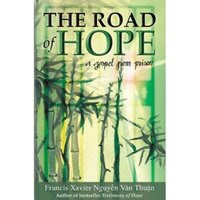 After hearing last Sunday about how Francis Xavier Nguyen Van Thuan spent nine years in solitary confinement, often in the dark, because of his faith, I really want to read his books The Road of Hope: a gospel from prison and Testimony of Hope, a course of spiritual exercises he was invited to offer the Roman Catholic Curia. In it he expresses the desolation he felt during his ordeal and how he found hope in the depths of darkness and despair. How does anyone endure such a thing and emerge still capable of love and joy, as he did? Some people remain open to these gifts in unbelievable ways...

A Death Retold is long and dense, so it's probably not a realistic goal to for this summer, but I want to try. It recounts the tragedy of a botched transplant in an undocument Mexican teen immigrant and discusses the social and ethical issues in our tiered health care system, as well us in transplant medicine in general, brought to light by that terrible case. It sounds like a story that weaves together a lot of compelling fields of inquiry - medicine, sociology, ethics, and history.

Last but not least, every year I try to read or reread at least one "classic."

Last summer when I was on my René Goupil mini-pilgrimage I came across this eerily relevant passage from Death Comes for the Archbishop and decided I had to get reacquainted with Willa Cather's work:
Before him, on the grey floor, in the grey light, a group of bright shawls and blankets, some fifty or sixty silent faces; above and behind them the grey walls. He felt as if he were celebrating Mass at the bottom of the sea, for antediluvian creatures; for types of life so old, so hardened, so shut within their shells, that the sacrifice on Calvary could hardly reach back so far…When he blessed them and sent them away, it was with a sense of inadequacy and spiritual defeat. -Death Comes for the Archbishop, Part III, Chapter 3.

That's my ideal reading list for this summer. I know I'll get through Walking the Wrack Line, and soon. As for the rest...they may get supplanted by other discoveries along the way, or put off for another time, but the desire to spend time with them is certainly there!
I welcome other suggestions too, so please let me know if you're reading anything good!
________________________________________________________
*Addendum: Toward the end of Hurd's book she mentions valuing Annie Dillard and Loren Eiseley. What a relief to know she wouldn't have minded my placing her in their company!
Posted by T. at 12:17 PM