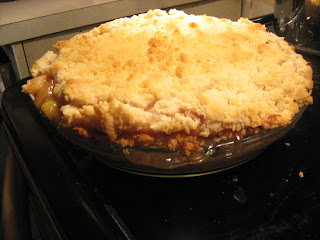 "To eat humble pie" (from Wikipedia):
"The expression derives from umble pie, which was a pie filled with liver, heart, and other offal, especially of cow but often deer or boar. Umble evolved from numble (after the French nomble) meaning 'deer's innards.' Umbles were considered inferior food; in medieval times the pie was often served to lower-class people...While 'umble' is now gone from the language, the phrase ['humble pie'] remains, carrying the fossilized word as an idiom."
Ingredients:
1. BRAIN - an incident involving a public display of one's knowledge, skill, and/or talent (optional)
2. HEART/GUTS - a subsequent challenging situation requiring a public display of one's knowledge, skill, and/or talent
3. OTHER OFFAL - an inability to use one's knowledge, skill, and/or talent effectively in the aforesaid challenging situation

4. LILY-LIVER - the arrival of another individual with comparable or superior knowledge, skill, and/or talent
5. GREEN EYES - successful application of that individual's gifts to the challenging situation, effecting the desired relief of suffering / completion of a procedure / facilitation of a needed protocol
Directions:
-Take brain, heart, and guts and stir together.
-After several minutes, toss in other offal. Mix well.
-When other ingredients translucent, grind up pieces of lily-liver and fold into mixture. Top with green eyes.
-Wrap in pre-made crust of past experiences and messages about self, perceived from others and cured in one's own mullings.
-Bake at low heat for several hours to days.
-For an unhealthy meal, eat entire pie at once. May cause lacrimation, nausea, or chest tightness.
Or, discard ingredients and start from scratch with fresh brain, heart, regenerated liver, clear eyes, and other vigorous, healthy internal organs.

***
It took some time and hard work for me to learn to do what I do. So when I can do a good job putting my training to the service of those who need help, I am happy.

When I sometimes need help with that job, I am unhappy.
Not long ago a woman I was working with was having trouble with an airway. She has been doing the work we do for as long as I've been alive. She is experienced and well-trained. But she couldn't get a good view of the vocal cords, couldn't intubate a patient, and asked me to take a look.
The tension of such a situation is heightened, of course, by two things: airway equals lifeline, so if we mess up there, someone's life is at stake; and, this type of procedure feels very public, with everyone else in the room staring at you as you try to succeed at something challenging, and all action halted because continuation depends on you completing this step.
The view was indeed difficult, but I managed to slide a breathing tube in on the first try, using some adjusted manuevers I had picked up during residency.
The woman I helped thanked me. We were both relieved. Did I think any less of her knowledge and skill because of the help I gave? Of course not. Our roles could easily, EASILY have been reversed. These things happen to EVERYBODY, regardless of training level, skill, and experience.
So why, when my colleague M. had to rescue a spinal I just could not for the life of me get in, did I feel so very, very bad?
I had trouble locating the patient's anatomical landmarks, which were obscured and a little distorted due to steatopygia

and other physical features. I tried for several minutes at different locations and felt like I was hitting bone everywhere. There were two surgeons and two or three nurses in the room watching and waiting as I inserted the needle into the patient and kept failing. I called a colleague into the room to help me out.
M. arrived. M. is the best anesthesiologist in my group. He is young and smart , wonderful with his patients, and he never misses a procedure. He is leaving our group to practice in a hospital closer to where he lives, and the entire hospital is abuzz over his departure, saddened to lose such a great talent. He inserted the spinal needle into a different spot. He hit resistance and withdrew it again, saying it felt like bone. He reinserted the needle, pulled out the stylet, and out came a beautiful, clear, slow stream of cerebrospinal fluid. Bingo. He was in. He injected the spinal medication, and we were ready to go.
He graciously tried to console me by saying the ligament felt like bone the whole time, and maybe I withdrew when I was actually in the right place.
It didn't matter. I felt like a mediocre schmuck. I had a feeling he would get it in about two seconds, and he basically did. I was glad for the patient, of course, because even though we had numbed the area with local anesthetic for comfort, it's still a drag to have to sit there while someone pokes you with needles, no matter how fine. But the humble pie was churning around in my stomach.
Is there such a thing as a job where you don't have to be 100% good at something 100% of the time and be 100% responsible for people in a workplace that's open 100% of the day and 100% of the year?
I've felt a lot of things about work. Satisfied. Tired. Occasionally proud. Sometimes frustrated. But complacent? Not a chance.
Posted by T. at 12:33 PM

What I do is nothing compared to what you do. But in the way you are feeling I do see something familiar!

If I make a mistake ... even the tiniest little bloop that even some of my colleagues don't notice ... I feel a failure. I get very down on myself. But when a colleague has a rough time of it I think to myself, "Stuff happens. He/she is still a fabulous musician!" Well ... unless the person really isn't a good musician. Then I confess I'm rather harsh in my thought. I'm forgiving of the talented, and quite unforgiving of the untalented and myself. Being harshest, of course, on myself.

Funny how some of us are that way, while others are the opposite, thinking only poorly of others and great things of themselves. I'm not sure what makes us the way we are ... the way we were raised, something inside of us that is just there? ... it's a mystery to me!

I'm just glad my little bloopers are no big deal in the grand scheme of things, even while they are huge in my little mind. Whew.

Great post. Its funny I'm revising for English exams and I can tell you that posts sure beats alot of the writers I'm forced to study
jack

Patty - funny you should mention that issue of response-style or whatever it is. Through The Sandman/Quietus Leo, who is hosting this week's edition of a blog carnival entitled Surgexperiences, I stumbled upon a blog entitled Spiritual Passages where I found this relevant insight:

“The way we feel about things is directly conditioned by the lessons we have learned in the past. They are an image of people we have been with and where we have traveled with them.

We may have learned to feel inadequate if we needed to ask for help with something. If we learned that lesson well, we will feel incompetent every time we need assistance with an effort.”

I have to teach myself a little resilience and tell myself instead, as Olympic athlete Melanie Roach said on T.V. this morning, "Stop worrying about what just happened. Don't worry about the future. Just live in the now." I have never been very good at setting my own burdens down, or cutting myself a little slack.

Ramona and Jack - thanks for the kudos!

I always appreciated an anesthesiologist (or surgeon...or nurse) who wasn't too proud to ask for help.

Don't you think God does that to keep us humble? Just to prevent the so-called God-complex? We're human, after all.

Thanks for the etymology lesson on Humble Pie!

I was discussing the rock band Humble Pie with a friend this weekend, and how the name did not fit the band somehow. But knowing now what a Humble Pie is, the name sounds cooler.

You are a great anesthesiologist and you should never forget that.

Katy - thanks for the support!

Oystein - did you check out Humble Pie's cover of "I Don't Need No Doctor" on Youtube?! http://www.youtube.com/watch?v=LZMmV6xXYFw

MH - thank you for being a great clinical role model, colleague, and friend. Magaling ka talaga.