Diaries at the Morgan 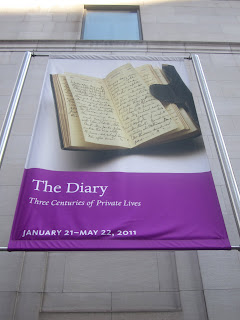 Christine Nelson , Drue Heinz Curator of Literary and Historical Manuscripts at The Morgan Library and Museum, has done a lovely job with the current exhibit, The Diary: Three Centuries of Private Lives. From the exhibit's companion blog:
"Where does a diary end and, say, a sketchbook or scrapbook begin? And what do we call a string of digital updates in which we reveal a little bit each day (or each hour, or each week) about what's on our minds? Or a public blog that tracks our periodic observations? All these forms of self-documentation have something in common with the traditional diary, with its focus on what I thought, felt, read, ate, spent, observed, or did today (and the next day, and the next)."

I've been wanting to see this exhibit since the day Prof. Michael Leddy mentioned it on his wonderful blog Orange Crate Art. I had the chance to go to the Pierpont Morgan Library with my kids today, and it was everything I'd hoped. The exhibit is housed in one room, sparsely adorned with only selected quotations from a few of the diaries displayed on the walls. The diaries themselves are presented neatly in cases with informative captions highlighting interesting facts about the authors or the writings themselves.
The diaries are presented in groupings such as "war diaries," "spiritual diaries," encrypted diaries, and diaries about works in progress, etc. with each diary open to a page of interest that gives the viewer just enough of a voyeuristic glimpse into the author's mind to be both intriguing and satisfying. John Steinbeck wrote famously on May 31, 1938, "Here is the diary of a book and it will be interesting to see how it all works out." The book was The Grapes of Wrath. We also saw the musings of Hawthorne as he was working out The Scarlet Letter, E.B. White on The Trumpet of the Swan, and diary drafts of Kingsley Amis's poems.

There were also observations of an American teenage actress in London (discussing how the British boys couldn't hold a candle to the ones back home), a chess diary by Ruskin, and diaries by Pepys (of course!), Thoreau, Einstein, Charles Seliger (whose penmanship strains the eye), Tennessee Williams (whose penmanship, by contrast, is large and loopy and a little multidirectional), John Tudor (from the period of the American Revolution), Bob Dylan (from much later!), Arthur Sullivan, and Sir Walter Scott. Charlotte Brontë's need to vent her frustration into a diary became kindling for her fiction writing, and I couldn't help smiling at one acerbic comment about "another who seems a rosy sugarplum but I know her to be colored chalk." 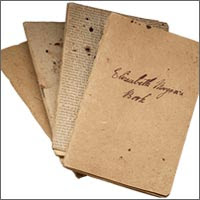 I was especially taken by the very first volumes we encountered when we entered the room: a small notebook dating from the Renaissance with erasable pages coated with gesso, and the 19th-century hand-sewn diaries of Elizabeth Eastman Morgan, who lived in Western Massachusetts and wrote about her household chores (sausage- and candle-making, butter-churning, pickling, spinning wool, etc.) and the signs that marked the change of seasons (the peeping of frogs in April, the appearance of whortleberries in August). Her diary is featured in the companion online exhibit and podcasts, which are captivating in and of themselves and well worth an afternoon of browsing, especially for people who are unable to visit the Morgan before May 22 this year. 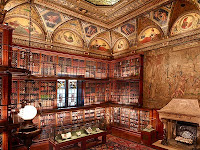 A special bonus was the chance to see Pierpont Morgan's restored 1906 library . Walking into the East Room reminded my kids and me of the scene in Disney's Beauty and the Beast when the Beast gives Belle the gift of a library, and she opens her eyes and sees a vast collection of books lining the walls from floor to ceiling. On display in the library's beautifully appointed rooms are some gorgeous illuminated manuscripts, a 15th-century block book, exquisitely detailed Babylonian cylinder seals, and music scores by Chopin, Liszt, and Mozart. The library website also offers, incidentally, a Music Manuscripts Online project, providing access to digitized versions of more than forty music manuscripts from the Morgan's holdings.

This was a wonderful exhibit. We bloggers are diarists of a sort, and collections like these churn up those delicious questions about why we do what we do and how we tell the stories of our lives. It's a lot of fun to see how some illustrious people have done just that over the centuries, setting down fragments of their minds for themselves and readers to see and contemplate again and again.
Posted by T. at 9:44 PM No comments: 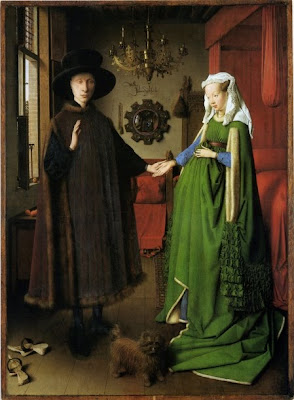 This Van Eyck portrait, traditionally known as the Arnolfini Wedding, is sometimes held up as an early (1434) example of marriage being portrayed in art as an actual partnership rather than a mere contract or event. If that's so, I wish the man didn't look so miserable! Some people call this "The Shotgun Wedding," but more likely the style of the woman's dress, not pregnancy, accounts for the exaggerated size of her abdomen in the painting.
I love the convex mirror painted on the wall behind the couple and occupying such a central focal point in the overall composition. The mirror is decorated with ten scenes from the life of Christ and shows the presence of witnesses in the room - the minister and perhaps the artist. 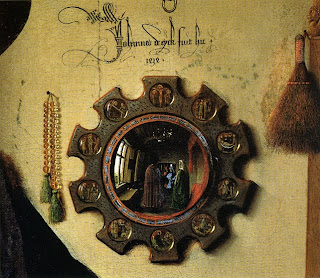 When I think of the institution of marriage as it has evolved in Europe and the Americas over the centuries, with some even feeling today that it is obsolete, all I can think is how thankful I feel for my almost-fifteen years of happy marriage. I look at other happily married couples and have two other thoughts: 1) It's so great to see people who are so comfortable, truly comfortable, with themselves and each other and 2) I hope my kids are lucky enough to find healthy relationships like these.
I know that luck or blessing or whatever you want to call it is only part of the favorable set-up. There's also diligence, and patience, and good character, and the capacity to see and want and choose good character in others.
As my children get older and begin to be interested in more grown-up experiences and relationships, I often wonder: how can we guide our children to make choices that will bring them relationships like these, the kind that will give them peace, joy, and lasting love?
Modeling a healthy and mutually respectful relationship is crucial, and I'm contented that my children seem to see marriage as a beautiful and valuable bond, one to welcome if a compatible partner and the desire to build a life with that partner transpire. We also tell them that being in love is important but that love is not enough; common values and the commitment to support each other through shared victories and problems, to build a life side by side with hard work, are essential and go beyond the bonds of friendship and romantic love into a more sacred love, the intimate love of family. The kind of love that is an active process and a daily decision, not merely a feeling or an experience.
Over the years I've nurtured both indirect and direct ways of trying to pass on some guidance and wisdom, as much as I have, to my kids. When we watch movies together, for instance, I always make a point to comment on the relationships in them - what makes them work or not work, why certain ones look promising and other don't, who's a jerk and who isn't. Two films we've watched on DVD recently stand out in my mind as having moments that exemplify relationships with promise: Little Women and Amazing Grace. In both, we saw couples who were able to see and appreciate the truth about one another and were not afraid to confront each other honestly with that truth, even if it was hard. Along the same lines, both films showed couples who were at ease talking and opening up to each other, listening well, and valuing each other's thoughts.
If I were to add one more characteristic to look for in an intimate partner besides those already mentioned - respect, diligence, thoughtfulness, patience, integrity, supportiveness, appreciation, and the ability to talk and listen comfortably and truthfully - I would advise my children also to seek partners who are happy with and in themselves. This kind of happiness requires self-knowledge, security, a healthy spirit, humility, and responsibility and can be found in individuals who don't look to others to provide happiness for them and don't blame others when happiness eludes them.
I think my kids are getting the idea, and I'm glad. I'm also glad, though, to see that when a Facebook questionnaire asked my teenage daughter, "Is it possible to be single and happy?" her answer was, "Of course. I am."
This, I think, already sets her on the right track.
Posted by T. at 1:15 AM 2 comments: