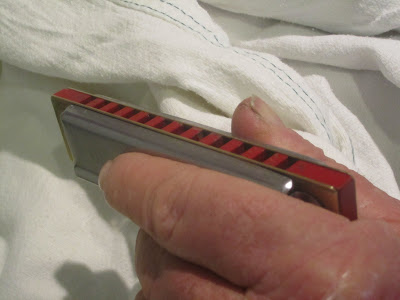 Today in the hospital we were all surprised to hear strains from a harmonica playing "Somewhere Over the Rainbow," "Silver Bells," and other gentle favorites in the preoperative holding area. It was a patient playing in his stretcher - hospital gown, I.V., and all. Hearing soothing music played live in a setting in which such a gift is completely unexpected is indescribable. When he came out of surgery he played again. We could hear soft harmonica music from the area in the recovery room reserved for people who are going to be fast-tracked home. What a beautiful visitation for our not-so-hallowed halls. I have permission from "Harmony Hank," as I'll call this patient, to share this memento of those moments here. On rare occasions, magic does happen in the hospital!
*** 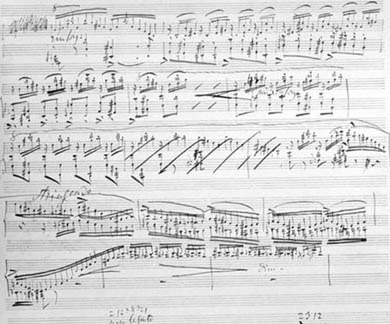 There are some works of art that have captured my heart forever and will always be on my list of favorite or "most influential" works or "works I love most."
Then, among these, there are those I cannot, cannot, cannot imagine my life without. They have taken root inside me and are woven into my permanent intellectual and psychic fabric. I cannot shake them. They are part of me. They haunt me. They possess me like spirits inside.
Liszt's Piano Sonata in B minor, which I've recently been re-obsessed with in light of an announcement that Philippine concert pianist Cecile Licad will be performing it in Boston next month, and which I happened to look up TODAY only to learn that it premiered ON THIS DAY in 1857, is one of those latter works.
For me it will always be inextricably intertwined with Frederick Ashton's ballet Marguerite and Armand, and frankly if I didn't know better I would have thought, listening to the music, that Liszt had written it specifically for Alexandre Dumas fils' story The Lady of the Camellias, the subject of Ashton's ballet. I like to think Liszt did have this story in mind; the play premiered in Paris in 1852, Verdi's opera La Traviata opened in 1853, and Liszt composed the sonata in 1852 and 1853 and published it in 1854. Coincidence? Moreover he had been romantically involved with Marie Duplessis, the inspiration for the character of Marguerite Gautier, between 1845 and 1847. Surely the Lady of the Camellias was at least an indirect inspiration to the Sonata in B minor?
Ashton describes seeing the ballet unfold in his mind upon hearing the sonata on the radio. One might say that because he was a talented choreographer he was able to fit the ballet to the music, but once you see the ballet, you realize that it's also the other way around: the sonata follows the story EXACTLY. The best Youtube version I could find is between time index 42:55 and 1:12:30 of this Youtube upload of the documentary Nureyev: I Am a Dancer. Fonteyn and Nureyev, for whom the ballet was created by Ashton, will always be THE Marguerite and Armand, to my mind. Sylvie Guillem may have had more acrobatic technique, but she didn't have the soul for it. Tamara Rojo, though, who recently danced the role in London, may have been able to bring both qualities together - flawless technique and mature artistry. I'd love to see her Marguerite.
As for the sonata, my favorite recording of it is still Alfred Brendel's from 1981, but Andre Watts played a stunning version in Tokyo in 1988, and Evgeny Kissin's is amazing too. The piece epitomizes the Romantic period. It's almost PAINFULLY emotional and unapologetically melodramatic. But it also expresses what we mere mortals have no words to express, and sometimes we need that kind of intensity, especially in a world that holds the UN-emotional - rational and the scientific - so dear.
Posted by T. at 9:16 PM 5 comments: