The Other Side of the Drape 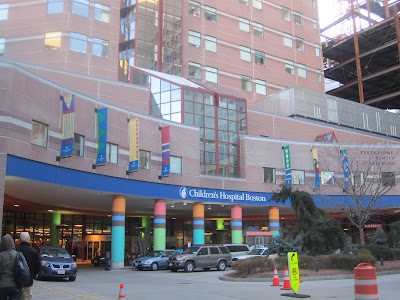 My son had been having episodes of belly pain right around his belly button for several weeks. I watched and waited. Between these bouts of mild abdominal pain he was completely fine - healthy appetite, active, happy. But I had a feeling something was brewing. I was waiting for the other shoe to drop. The disease finally declared itself: several nights ago his belly pain was severe and unremitting. He was in tears. He couldn't sleep. The pain had shifted a little bit to the right. Sometimes walking made it worse, and when I examined his abdomen, pressing on the area and abruptly letting go increased the pain. Yet he was also able to tolerate the pressing, and to hop up and down on either foot. Still, I was pretty sure of what he had. It was time to take him to the hospital. Appendicitis.
"Where would you rate your pain on a scale of 1 to 10?" asked the E.R. nurse at our local hospital.
"Um...6.5," my son answered. His dad and I had to chuckle. This ultra-mathematically-precise answer was so in-keeping with his personality.
Some community hospitals evaluate and treat appendicitis in children but many refer patients directly to Children's Hospital, as ours did. I was glad of this; it's a terrific hospital, with complex, well-oiled systems which include not only health care delivery but also family and child supports. But I was also a little nervous. I had learned to anesthetize children here, and the training process had been demanding. I didn't know what it would be like to be on the other side of things.
My son and I walked into Children's just after midnight. It should have felt like home turf in a way, but it felt utterly foreign. We were led straight into an exam room. A strikingly beautiful pediatric resident came to interview and examine my son and did the same exact physical exam I had done at home. His peritoneal signs (i.e. symptoms that suggested an irritated abdominal lining) were even less prominent in the emergency room, and he had no real fever and an only slightly-elevated white blood cell count. I was concerned that the doctors there would lean toward discharging him, but I had a strong feeling we needed to be there for the long haul. The pediatric emergency medicine fellow came to see him as well. She repeated the questions and the exam. I can see now why this process can be irritating to family members who may not be familiar with training institutions. Can't the senior people just get the info from the junior people? Why do they have to ask the same questions and repeat the exams over and over? The answer is that doctors have to practice seeing with their own eyes, touching with their own hands, and knowing with their own inquiries. They can't just take someone else's word for what's going on with any given patient.
At 3:15 we went up to get an ultrasound of his abdomen. The radiology fellow seemed to be the serious, soft-spoken type (or maybe he was just quiet due to the time of day?), focused, with a cerebral air and a gentle manner. I watched as he scanned my son's belly, right kidney, left kidney, bladder, mid-abdomen. He pressed hard several times on a spot just to the right of my son's navel, and each time my son would wince or say "ow." After 45 minutes the fellow said he was 90% sure it was appendicitis, but it was hard enough to see the tip of the appendix that he was going to recommend a CT to confirm. "Usually it's a point of pride for me not to have to jump to CT confirmation, but in the interest of certainty I think I need to swallow my pride and send you guys to CT just to be sure." I was already sure, based on everything that had happened, but I respected the self-effacing and careful way he was willing to place my son's well-being ahead of his own professional "image" which, in my opinion, wouldn't have been 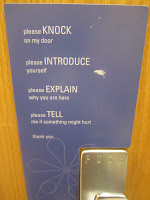 diminished anyway.
The E.R. nurse wheeled my son back to the exam room in the emergency department to await the next step. When we arrived he thanked her for transporting him. With a look of amazement she turned to me and said, "Who has such nice manners at four in the morning with belly pain?" I was so proud of him for staying sweet and patient despite his fear and discomfort.
The pediatric resident came in again to let us know they were in talks with the surgical team to see if the surgeon wanted to wait for CT confirmation or go straight to the O.R. based on the exam, labs, and ultrasound. We waited another hour after she left. My son confided, "Mommy? I'm worried about the surgery." I reassured him there was nothing to worry about: we were in one of the best hospitals for children in the country, perhaps in the world, and I trusted the surgeons and anesthesiologists there to take good care of him.
What reassured him most, however, was actually meeting his surgeon, a man who will be on my love-forever list for making my son feel instantly comfortable and for saving his life. We forget, when we are involved with several appendectomies a week most weeks out of the year, and it's one of the most bread-and-butter operations performed, we forget that these operations literally save patients' lives. Without them, patients risk dying. As my consent form read, "Alternatives: none." Our surgeon didn't want to wait around for a CT. He agreed with me. Everything pointed to appendicitis. He was going to bring my son to the O.R. to take his appendix out.
The surgical resident came to have me sign the consent form. By this time word had gotten around that I was an anesthesiologist, and that I had done some of my training there. Every new person who introduced himself or herself to us mentioned this to me. I had to smile when the surgery resident ACTUALLY USED HIS STETHOSCOPE and listened to my son's heart and lungs. He truly would not have been breaching any care standard if he had deferred the heart and lung examination at this point in the process - we were going to the O.R. regardless of what how heart and lungs sounded - but I appreciated this gesture.
We were transferred up to the O.R. holding area where my son changed at last into a hospital gown. His belly pain had been waxing and waning throughout the night, but now the pain was increased and holding. "Now that we're taking it out, it's making its last stand," he said good-humoredly through his pain. To my delight the pediatric anesthesia fellow on-call that night was a friend and former colleague of mine, and the anesthesia resident on-call was someone from the program that had trained me, which made me feel very comfortable because I know those residents are HAMMERED into doing the right thing for their patients from the first day of training. I knew these two, and their attending anesthesiologist, would all take very good care of my son.
And now came the hardest part: waiting. Waiting sucks. It was six in the morning. Even though all I wanted to do was sleep, I could only doze off for about twenty minutes. I wandered aimlessly through the parents' lounge. I watched the slice of sky between buildings outside the window change from black to grey to light blue as dawn broke over the city of Boston. Over an hour later the liaison called into the operating room for an update, and the specimen still hadn't been taken out of my son's body. I found that a little worrisome. Another colleague who was working in a nearby ICU stopped by to visit me after his morning rounds. Facebook friends were sending volumes of good wishes. I felt incredibly uplifted and supported but every clock tick was like something poking me to remind me that all was not yet well. It was like waiting for a plane to land and fearing that something might still happen.
Finally after about two and a half hours the surgeon came out to tell me they were done and my son was in recovery. The appendix had not perforated but it was one of the nastiest he had seen in years. It had been walled off under scar tissue from my son's body's attempts to defend against its brewing trouble, hence the equivocal nature of his peritoneal signs. The appendix was snaked back up behind the liver and toward the side, and it was large and gangrenous. They had had to widen the umbilical incision in order to be able to get it out. The surgeon showed me a photo (shared here with my son's permission): 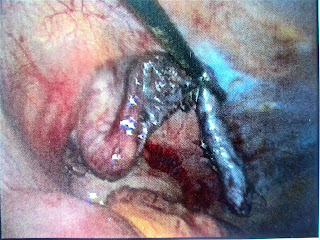 That's when it hit me. My son could have died. Without this guy, and the other members of the surgery and anesthesia and nursing teams, or if we had been dealing with this 150 years ago, my son likely WOULD have died or at best gotten very, very, critically ill. ICU ill. It's a chilling and humbling thought.
My son did very well. He was lucky to have a room to himself when he went up to the floor. My husband and I got a tour of the place, which was clearly designed to be as family-friendly as possible, and every time we walked by his doorway my son would give us a sweet, wan smile from his sick bed. We watched "A Bug's Life" and "The Princess Bride" while my son had some Jello and mac-n-cheese and I had salads from Au Bon Pain, which at children's is a 24/7 operation. I had to go home for the night to rest for 24-hour call the next day, but my husband stayed with our son overnight and was able to take him home the next morning. My son never once forgot to say "Thank you" to his caregivers whenever they did something for him. Before I left for the night he even thanked me for bringing him to the hospital. I am grateful for his sweetness, and for the wonderful individuals who saw us through his first major ordeal. We owe them all a debt that I can only repay by trying to be for my patients what they were for us.
________________________________________________
Addendum 3/14/12: My son's thank-you note to his surgeon.
Posted by T. at 8:23 PM 14 comments: