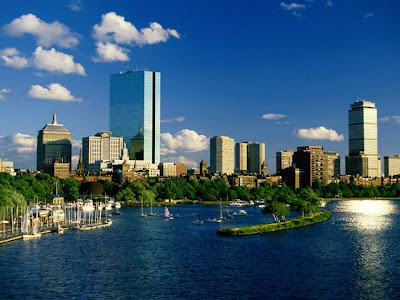 The Virtues of Appropriate Fear 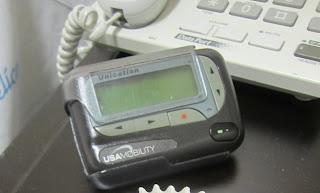 Anesthesiologists shouldn't "scare" easily but they should "scare" appropriately. That is, an anesthesiologist needs to be able to keep functioning under stress, with as much calm, composure, and efficiency as a situation will allow, and call for any necessary help without reservation in the face of danger; but he or she also needs not to be so cavalier or arrogant as to be dismissive of extremely tough clinical situations, or be in denial that such situations are, in fact, frightening and dangerous.

Three examples of the latter come to mind - situations which have always commanded, and forever should command, a clinician's humble and healthy respect: 1) the potential need for intubation of a pregnant woman 2) the neonate, infant, or child in distress and 3) possible airway loss in a patient whose jaw has been wired shut.

In the last several weeks we had in our recovery room a patient whose clinical situation and appearance after surgery were something like this (this is the closest comparable illustration I could find on Google Images, from this paper in the Journal of Oral and Maxillofacial Surgery): 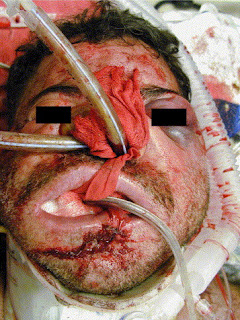 His lower jaw (mandible) had been secured to his upper jaw (maxilla) with a combination of wiring and elastics, and by secured I mean fixed SHUT. After surgery he was kept sedated for comfort and the breathing tube he had in his windpipe through his nose was kept in place.  The swelling of his cheeks and lips was severe, and any doctor, nurse anesthetist, or nurse who saw it would have had, as I've outlined above, what I like to call a "healthy respect" for the state of his airway. This is a potential life-threatening nightmare waiting to happen. When you are on call for the night and a patient like this is in the PACU waiting to be transferred to ICU you hope to God, even if you're not sure God exists, that all goes well and the breathing tube stays where it's supposed to. Fortunately he was transferred to the ICU in stable condition, and the night passed without incident.

As did the next night.

On the third night of his ICU stay my beeper went off at about one in the morning with a stat call to the ICU. I talked to one of the nurses on the phone and she said, "It's the oral surgery patient. He bolted forward and self-extubated."

I ran to the ICU and found this young patient grey as a storm cloud, with a low heart rate and, according to the monitor, the lowest oxygen saturation I'd ever seen in someone who wasn't dead. The covering night physician for the ICU, two respiratory therapists, and four or five ICU nurses were around the bedside getting equipment ready and assisting each other with resuscitation maneuvers.

"What do you need?" one of them said.

I immediately starting cutting the jaw securements, thinking all the while, "The oral surgeon's gonna kill me, but oh well." Fortunately a video laryngoscope was at the bedside and I was able to insert it into the patient's mouth and within a few seconds visualize the epiglottis and glottic opening clearly. The breathing tube had indeed slipped out and was dangling behind the arytenoid cartileges.

"Do we have any nasal RAEs in here?"

Someone handed me the bent forceps we use to advance nasally placed tubes through the vocal cords. Fortunately for us the patient's youth and vigor meant that even with sedation he was attempting to draw breaths, and with the laryngoscope blade lifting his epiglottis, these breaths were actually helping to improve his oxygenation even with the breathing tube dislodged.

I maneuvered the tube just to the entry point into the trachea, then manually advanced it in. With the breathing tube back in place his oxygen saturation came back up to 100%.

Once we felt the situation was stable we all took a deep breath, then called the oral surgeon, who came to the hospital immediately and re-secured the maxilla and mandible.

Honestly? I was SCARED. But you know what? I was supposed to be scared. There's a bad kind of scared that paralyzes you and makes you incapable of thinking clearly and doing what you need to do, and a good kind, the kind that removes any possibility of complacency or denial that something bad is happening right in front of you (pompous Downton Abbey doctor, anyone?).

We need to de-stigmatize the word and idea of fear a little bit and realize that not all kinds of fear are harmful or bad. Some fear is healthy and can actually protect people.
Posted by T. at 12:34 PM 13 comments: