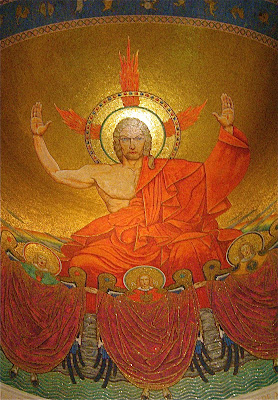 Last weekend I went to Mass at the Basilica of the National Shrine of the Immaculate Conception in Washington, D.C., the largest Roman Catholic Church in North America and one of the ten largest churches in the world. 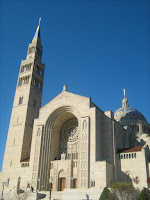 People either love the Shrine or they're repelled by it. I'm one of the former. I used to go there a lot during high school. The vastness of the interior and the beauty, to my mind, of the art work had the power to lift my spirit and give me a sense of calm and focus.
I was in D.C. for a wake last Sunday. A beloved matriarch in my family passed away. The week prior, my mother-in-law suffered a leg fracture and underwent surgery. The opportunity to visit the Shrine again after all these years away from my home town was a real gift, a chance to find some much-needed renewal in sacred space and time.
The friends with whom I stayed affectionately call the 3,600 square-foot mosaic of Christ - the largest mosaic in the world depicting Christ seated alone, with nearly 3 million tiles - "Angry Jesus."
"I love Angry Jesus," one of my friends said to me.
Now that I've seen the image again, I have to agree: I love Angry Jesus too. 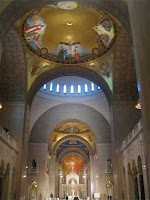 Like the Shrine itself, this colossal icon by Polish artist John de Rosen (or Jan Henryk de Rosen) inspires mixed reactions. Just scouring the internet for people's responses I found a lot of discomfort - along the lines of "He looks so intimidating," or "It's so scary the way he's frowning down on everybody" or "Such a stern expression, with those flames coming out of his head and that bright red robe..."
Angry Jesus is a powerful image. The minute I see his face, I start hearing the "Kyrie" from Mozart's Requiem in my head. He's not the kind and gentle Jesus of the Gospel that everyone wants as a best friend. He's been to hell and back and he's way past all that. He has been wounded and tortured but now even the deep jab to his heart from a Roman lance is no more than a scratch. This Christ isn't here to pray fervently in the desert or smile at us. This Christ is done. With his open arms he seem to ask either, "What the hell are you people doing?" or, "Well? Are you ready to open your arms, or aren't you? Have you stepped up and lived up to the goodness within you, are do I have to smack you upside the head?" I love Angry Jesus.
I never felt put off or afraid of Angry Jesus, even in high school. Perhaps it was because I never took his wrath personally, and I felt there was some solidarity between it and the idealistic anger I felt at the time at various world issues. Back then it was, oh, I don't know, the Cold War and the Ethiopian famine. Now, as my son observes, "He's angry in a special way. I think he's angry about pollution." Out of the mouths of babes! Because, of course, there's pollution everywhere - in the world, in human minds driven by prejudice, in human hearts fueled by hate. 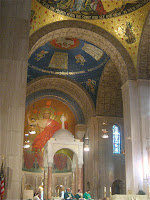 When I pray in the presence of this striking icon, in that enormous space filled with light and hope and the faith of many nations, I feel stronger, ready to face the world again. It may just be that the act of meditation, as I've heard some studies have shown, causes electric and neurotransmitter changes in the brain that promote a sense of well-being. It doesn't matter. We are creatures of imagery and sound, of smell and touch. For me the smell of the rising incense in that basilica, along with my prayers - thoughts of hope and desire and love for my family - floating together toward de Rosen's Christ in Majesty had the power to heal and give me rest. I think it was Franz Werfel who expressed it best: "For those who believe, no explanation is necessary; for those who do not, none will suffice."
Posted by T. at 8:54 AM

I love that church! Spent a lot of Sundays and ordinary days there during my single days living in an apartment across from where I used to work near the Union Station. Oh, I love DC! Great photos and posts, btw!

I love the "Angry" Jesus also. I look at him and realize we belong to a powerful God. He does have a lot to be angry about anyway.