The Edge of the Precipice 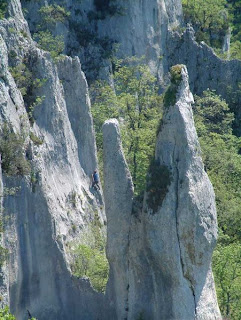 It was the second repeat C-section of the day. Both mothers had been obese. Both had had spinal anesthesia, the placement of which I had expected to be much more difficult than they'd ended up being. We were on a roll.
Then it started happening. That sinking feeling that something was just not quite right. Like when you're watching a film of someone climbing up a dangerous incline, and the camera zooms in on a pebble loosening from beneath a precariously placed foot, then catches the moment the foot slips on a rock and knocks the pebble down a dizzyingly steep ravine.
Obstetric anesthesia is like this. For the most part you're dealing with healthy young women having healthy babies, and it's generally a happy aspect of anesthesiology. But when things go bad, they're REALLY bad, so when you start to sense that they MIGHT go bad, you're on red alert until reassured otherwise. First there were mutterings about scar tissue. The two surgeons, my friend Keira and her colleague Marcus, both of whom were highly experienced, were having a tough time gaining access to the uterus. A lot of blood was collecting in the blood canister after being suctioned from the surgical field. In situations like this, we try to read each other's gazes almost telepathically, without help from the other expressive parts of our faces, hidden as they are behind surgical masks. We try to glean more from each other's curt words than is usually intelligible. We don't want to alarm the patient who lies awake on the table with her abdomen cut open, but we have to communicate with each other clearly and efficiently.
I put my face very close to the blue drape separating my cockpit from the surgical field. Keira looked at me and said, "Her rectus abdominis is totally stuck to the wall of her uterus." That one sentence summed up their situation with the swiftness and precision of her deftly wielded scalpel. There was so much scar tissue that body parts that weren't even supposed to be touching each other were fused together in a clump that had the potential to cause tremendous bleeding - more than the liter of blood that had already been lost.
Somehow they managed to dissect through the abnormal muscle and make the uterine incision to get the baby out...then they couldn't get the baby out. Marcus was pushing so hard on the upper part of our patient's belly that he might as well have sat on her. Keira was elbow deep in her abdomen trying to pry the baby out. She called for a suctioning device and applied it to the baby's head. Three times she tried to extract the baby, three times the baby would not come loose. At one point the suction device popped off with a jolt and spattered blood in multiple directions. Meanwhile I was talking to the mother, telling her she could expect to feel a great deal of pressure and tugging but should not feel sharp pain. I was watching her vital signs, pushing drugs to make sure her blood pressure didn't collapse, all the while hoping I wouldn't have to attend to a blue, lifeless infant when we finally did deliver the baby. I had visions of that ravine opening up below us all, ready to receive us as the rocks shifted out from under us and we finally plummeted out of control...
But somehow we kept it together. A glance here, a barked order their, few words but somehow a ton of communication among people who knew each other's language and signals well, from having worked the same beat together countless times. Keira widened the incision, tried again, Marcus pushed even harder, and somehow the baby's head finally appeared, then shoulders, then thankfully the rest of its greyish-pinkish body, ten fingers, ten toes, with a little whimper that enabled me to move on to the next set of tasks with some hope that all would be well. As soon as the baby was handed over to the pediatrician and nursery nurse I had another surge of busy work - oxytocin for the mother, antibiotics to hang, meds to manipulate blood pressure if necessary, blood loss and urine output checks - while Keira and Marcus began the daunting task of repairing and closing all the disorganized layers of tissue that had been like a forest of brambles in their way. The mother was doing well. The baby had had reasonably good Apgar scores and was whisked off to the nursery after a moment with the mother. The surgeons kept the bleeding under control and sewed the mom back up without incident.
I got to go home and go to my oboe lesson after that, and playing my scales and Gordon Jacob studies felt like dipping tired feet into soothing, flowing water. There's something therapeutic about breathing music into existence, and hearing one's breath emerge as a series of pure, almost imperturbable tones. And the great thing is, if I mess up with my oboe, I don't have to worry about killing anybody!
Posted by T. at 10:14 PM

This is gorgeous and harrowing. I'm not sure how you found me but I'm glad that means I found you.

It's so amazing to see into your world through your voice. Thank you.

It's interesting to know that because of anesthesia mothers are able to stay awake during most C-sections. The first time I witnessed one I thought it odd that the mom was talking to her husband while her stomach was wide open. It's still awe inspiring.

Shuna - it's I who should thank you! Seeing the world through YOUR eyes and voice is always such a beautiful, instructive, pleasurable experience - much like enjoying one of your creations, I imagine, and I truly hope I get to do THAT someday! If your work in the kitchen is as good as your work as a writer - and I have a feeling it is - people must leave the table totally transformed. Thank you so much for stopping by. Please know that I never order dessert now without thinking of you and your blog, and if it's a great dessert I try to remember to tell the server to compliment the pastry chef. (Yes, I'm one of those people who orders a meal AROUND the dessert I'm planning to choose...!)

MSG - I still haven't gotten over the awe of being able to provide that either. I mean, they are indeed WIDE OPEN on the table, yet at times smiling and telling you the names they've been considering...All I can say is if I had been Bier I'm not sure I would ever have had the guts to TRY spinal anesthesia on someone, even myself, as he did, I believe, with the help of his lab partner!

Unsure of how it would come across, and concerned that I didn't make clear what superb work "Keira" and "Marcus" did for this patient, I almost deleted this post...so thank you both for taking the time to leave such thoughtful comments! I guess I'll leave it up.

P.S. Foodies out there - Shuna Fish Lydon has a BEAUTIFULLY written site at http://eggbeater.typepad.com. Check it out!

Once again I am awed by your ability to really share your love of what you do and your true dedication and ability to show it us. Thank you! I enjoy all your posts, medical, literary and musical! A true renaissance woman.

Kathleen, you are too kind! Thank you so very much. I don't feel like a Renaissance woman at all - more of a disorganized blob who's interested in too many things! But I do have a lot of loves in my life, and count myself blessed.