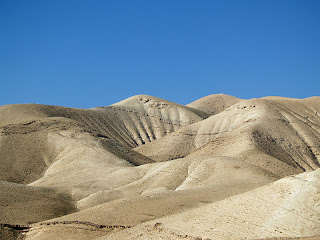 I was just reading an old blog post about ballet shoes and found this thought: "I'm sure every art or profession has its share of rituals created by its practitioners. I've seen tennis players with their racquets and doctors setting up their central line kits get pretty particular about what they do with their instruments and how they do it. I think ritual even at its most mundane is valuable. It sets a rhythm. It defines the mind's foci of attention. It enacts meaning and infuses physical acts of work with the desires that underlie the work."
So when the hospital chaplains toured the PACU today placing ashes on patients' and clinicians' foreheads, I received my share, Catholic agnostic though I may be (and ironically, at times actually somewhat more observant than my truly faith-filled husband - perhaps precisely because I find ritual to be very grounding).
I must seem a bundle of contradictions, faith-wise. What am I, spiritually speaking? A theist who's skeptical about the miraculous? An atheist who prays? A reluctant yet enthusiastic believer? A Christian who's not a Christian? A faithful unfaithful Catholic? A person who believes every act can be a prayer, every moment a moral choice between love and un-love, but who also finds the whole idea of spirit and spirituality challenging? I think I might be all the above. Reluctant. Ardent. An agnostic who wants the Shroud of Turin to be authentic. A believing nonbeliever who talks to saints.
***

Here are some Ash Wednesday FAQ's I've encountered over the years:
Is the whole ash thing a sacrament? Not officially, no.
Is Ash Wednesday a "holy day of obligation?" No. But interestingly, a lot of Catholics who miss their "obligatory" holy days show up to church on Ash Wednesday.
Why smudge black ash crosses on your foreheads anyway? Because we love symbolic expression of mystical realities. That's all - no magic, no voodoo, no special power. Just connection to ancient biblical heritage - i.e. many references to marks on foreheads throughout scripture - and to ritual reminders of spiritual work that needs to be done, to identity and meaning that need to be constantly renewed.

Why "celebrate" something so depressing as Lent? It's a liturgical season that echoes the 40 days Jesus spent praying in the desert, the "desert times" in all our lives, and the barren winter of ordinary time that leads to the rebirth of spring. It's also the big preparation time for the holiest remembrance of the year, that of Christ's death and resurrection. I love marking time with the liturgical seasons; they create a rhythm to the year of faith-practice that just sweeps you along on a journey from an infant's very earth-bound birth in an obscure village to a cataclysmic, mystically transforming event for one man and, many believe, for all.


But I have to admit I've never really LIKED this particular season, Lent. It has always seemed so gloomy. I don't like morose approaches to faith and life in general. One of my colleagues said to me light-heartedly today, "To dust I shall return? No way. I'm going to have myself cryogenically frozen!"

I don't think Jesus spent his 40 days in the desert beating himself up over past mistakes or nurturing in himself a sense of unworthiness, shame, or fear. I don't think this is what he was about or what Lent is meant to be, but in the past the season has often been described to me as a time to reflect on sinfulness and the need for repentance. I think of it as spiritual work-out time - like the sometimes hard and painful but ultimately health-building, strengthening, wonderful exercises dancers do at the ballet barre. I have found that retreats - stepping back from material cares and mundane concerns into silence and sacred space - can make that spiritual work really fruitful, but silence and sacred space are really hard to come by these days, making the demarcation of sacred time even more valuable.

I think Jesus spent his time in the desert in deep connection with Spirit and world. I appreciate what Bruce Feiler said in his program Walking the Bible, during which he visited the awe-inspiring Sinai Desert: "In the desert you are between being in extreme places, having extreme emotions, and opening yourself up to spiritual ideas that never existed before. That's why the desert is such a powerful place. You're pushed to the limits of your capacity and you crave nonhuman, nonrational support -- that is, God...That's what Jews, Christians and Muslims all have in common: a single man goes out into the desert and has a transforming experience." 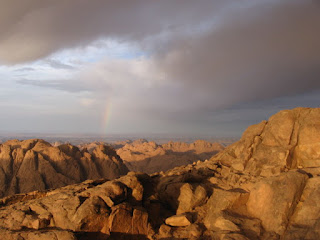 For my fellow Catholic-geeks (reluctant or ardent, or both) out there: here's a Lenten Meme I found on other blogs while hopping around the Net this evening. Enjoy! :)


What is your favorite Sorrowful Mystery?

Aw, man, a Sorrowful Mystery? A favorite one? Isn't that, like, a contradiction in terms? Oh, all right...The Agony in the Garden. Jesus at his most human: feeling alone, praying his heart out, stressed out enough to show hematidrosis, yet in the end choosing to trust in God completely...

What is your favorite Station of the Cross?

Veronica wiping Jesus' face. Yes, it's a fictional incident (most likely - or maybe it's based on an incident like it and got passed down through oral tradition). But I love it. I love the healing element, the laying on of tender hands on suffering face, the courageous love of it. I love the whole "left-his-face-imprint-on-the-cloth" legend. I love its narrative cousin, the story of the Shroud of Turin. I know, I know - the shroud's a medieval hoax, right? Well, I love it. It's just so coo-ool. What can I say.

Do you fast during Lent?

I try to observe the Ash Wednesday and Good Friday fasts but don't always do so well. I understand that there's something instructive about experiencing hunger...but it can also be impractical...

What is your Lenten resolution?

I don't recall being brought up with the idea of "giving something up" or even encountering the idea till I moved to the United States. The custom is similarly unfamiliar / absent on my husband's French side of the family. What I'd like to try this year is to recuperate some of the education I had years ago about my faith, maybe be a more rigorous apologist for those convictions that I do hold dear within the framework of my faith.

Do you use Holy Water during Lent?

I've only ever conscientiously used holy water once in my life - so no, not typically.

How many times to you go to Mass during Lent?

Weekly, as is our family's practice, but we also try to engage in Holy Week pretty actively and have a liturgically rich Triduum.


Wishing everyone who enters the season of Lent a good "desert time..."

"I guess if introspection is your thing, then the desert is the place for you." -Anthony Bourdain

I have to leave a comment because I love to read a blog that speaks to me. All the mixed up feelings I read in your blog are similar to how I feel. I am a member of the United Church of Christ, and not Catholic, but more & more I see the practicing and the rituals as a way to be faithful. I didn't go to Church last night to receive the ashes, but maybe I should have.

Dear dads-skrink, thank you so much for coming by. It's so nice to know there are other folks out there who are also trying hard to learn and be true.

I read a great essay entitled "The Clarinet" by Peter Bebergal, in a book he co-authored called The Faith Between Us, that articulates beautifully the rich contribution rituals and observances can bring to a life of faith or even to a SEARCH for a life of faith. He also draws parallels between learning clarinet and learning faith, which as an embryonic oboist I admired greatly.

Thanks again for walking part of the way with me here!