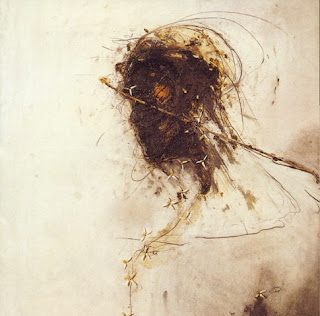 For anyone who missed the previous post: I've been mad at Peter Gabriel ever since I discovered that he appropriated an Armenian folk song into "The Feeling Begins," the first track of his 1989 Passion CD, and billed it as his own work.

Even though he printed in tiny letters in the CD booklet that the duduk in that track was playing the "Armenian melody," he gives no credit to the duduk player for the arrangement / recording of the melody.

In an effort to learn about the music arranging process, I decided to listen to two different artists' renditions of the melody, entitled "Hovern Engan" or "Hovern Enkan," and try to create a simple arrangement for orchestral oboe for myself. I spent a couple of hours this afternoon listening intermittently to performances by Jivan Gasparian and by Vatche Hovsepian, who had been the dudukist on "The Feeling Begins."

In the course of trying to figure out the core structure of this song underneath all the advanced embellishments by Gasparian and Hovsepian, I heard something on Hovsepian's recording that sounded very familiar. It was a musical idea that was also on "The Feeling Begins," but played by instruments other than the duduk. By implication, added by Peter Gabriel, and also by implication, composed by him - yet here it was in Hovsepian's arrangement.

The phrase I'm referring to can be heard at time index 1:59 on "The Feeling Begins" (both on the CD track and on the Youtube video below) and at time index 2:47 on Hovsepian's recording of "Hovern Engan."

Now what I'm wondering is, did Gabriel take that from Hovsepian too, or did Hovsepian echo it from having worked on the Passion CD years ago?

My Ocora Records recording of Armenian instrumental music, directed by Robert Ataian, should be arriving in the mail soon. This may be the recording that Gabriel credits in his CD booklet. If it is, we'll see if this same musical idea is in Hovsepian's earlier performance of the piece.

For now, I leave you with all three versions of the music via this video from Youtube uploaded by Aussiemystic and via links to Hovsepian's and Gasparian's performances of the work. Enjoy.

The image of the Passion CD cover art used here is used under "fair use" as:
-It is the primary means of visual identification of the album in question.
-It illustrates an (arguably) educational article about the album from which the cover is taken.
-It is a low resolution copy of the album cover.
-It represents only a portion of the album's complete packaging and cover art.
-It does not limit the copyright holder's rights and ability to sell and market the album from which it is taken.
-It is not replaceable with a non-copyrighted or freely copyrighted image of comparable educational value.
Posted by T. at 3:52 PM

I'm going back & forth on this one. Some "classical" composers took folk tunes and used them and still they get credit for the work. So I just don't know ... ?

Or maybe I am just being argumentative.

Me? A simply oboe girl? Hmm.

Vaughan Williams at least had the integrity to CALL his works things like "Six Studies in English Folk Song" or "Fantasia on 'Greensleeves.' "

I think on the whole there's more transparency in what the "classical" composers have done.

And I gotta say, your so-called "argumentative" is about my "nice!" :)

Patty - I just thought of another way to express why I see the classical allusions to folk music as different from what PG did with Hovern Enkan.

Suppose I wrote the following and put my name down as the author:

Roses are red
Violets are blue
But the snails in my garden
Just don't have a clue
The birds fly about
The butterflies too
Pollinating blithely
Oblivious to
Forsythias' yellow
And azaleas' pink
The falling white cherry blossoms
Inspiring me to think
They don't even know
To WISH that they knew
That roses are red
And violets are blue.

I dare say my appropriation of the "Roses are red" trope would probably be accepted / acceptable. For the record, I did write the above, just now, off the cuff, and I fully acknowledge that the verses depend largely on the previously written "Roses are red" theme.

But what if I did this (please forgive the analogy - I woke up with it this morning), again putting my name to it, with no other attribution:

Sorrow is like smoke
sneaking under doors
seeping into everything
through small cracks.

Fear's like the cold
surrounding, isolating,
rendering you raw
inside and out.

Love's illumination
shows smoke for what it is
warming our cold hands and hearts
till our isolation
and our raw hurt
are gone.


Wouldn't it be WRONG for me to claim I wrote this, and not mention any other source, when it basically uses the first part of your MUCH better poem almost word for word?

By the way, to see Patty's lovely poem on sorrow, please check it out at http://planetmitchell.com/pattyo/.
BTW, Patty, you've got some nice poems and great recipes there! I'm so glad I discovered your "other" blog!

I can see what you are saying, T. Just not sure I'm gonna agree or not. But maybe I haven't spent enough time pondering.

I wasn't thinking of RVW so much as Ives. And Harris. They took folk tunes much more (in Harris' case using the lyrics as well). I'm sure the program notes would comment on that, but the composers didn't. They just took them and used them.

Anyhoo, thank you for your extremely kind words about my "poetry piffle" as I call it. Oh how I wish I could be a "real" poet, but mostly I can't quite let myself go and do it. I did kind of like my sorrow poem, though. It just hit me. I used to study poetry with three other women; I called it our poetry square, and they were my poetry pals. They were MUCH better. It was quite humbling. I figure humbling is good for me, though. I fear arrogance, and I know it runs in my blood. Along with all this stupid iron I have to continue to take! Heh.

What an interesting discussion. It used to be just fine to echo other people's verse in yours; that Shakespeare guy did it shamelessly (he used other people's plots left and right). There's a lot of pleasure in poetry tied into allusiveness and responses to other poems. (Without that, TS Eliot would be lots less fun!)

Does it seem worse when Gabriel does it now because (we assume?) he's making a boatload of money of his work AND someone else (the person who's performance he sampled?) isn't in all likelihood. (Did he sample someone else's work, or have a new performance recording done?)

Or is there a level of cultural appropriation that seems problematic? (Like he's appropriating in a sort of colonializing way for his capitalistic purpose?)

Or is the irritation at the feeling of being "fooled" into thinking Gabriel wrote something? If you'd have recognized the allusion right off, would you be irritated in the same way?

Bardiac! Great to hear from you!

The answers to your not-unexpectedly astute questions are

I don't know if you saw my conversation with Elaine Fine on the previous post, but I think I AM more irritated by the "allusion" because I did not recognize the piece "alluded to" - an idea I was getting around to expressing with my Hava Nagila example on that comment board. At the risk of restating this, I think the classical composers that "allude" do so more transparently, and with material more recognizable to their expected audience, which may lie at the heart of why such "allusions" are so acceptable. They are ultimately recognizable as such.

Moreover, these classical composers will ARRANGE THE BORROWED PIECE THEMSELVES, so they're doing some musical work if not outright COMPOSING those sections.

What Peter Gabriel SEEMS to have done - and I won't have a clear understanding of this unless I can get a copy of the Ocora recording (and isn't that part of the problem - no one on the outside can get a clear understanding of just what he did?) - is taken a folk song from another culture, in a PUBLISHED/previously recorded arrangement by another musician, added some drums and synthesizers, called it "his" composition, made loads of money off it, and gotten away with it.

All in the name of educating the rest of us about "world music" and advocating for its musicians.

To me this smacks of something far more nefarious than "allusion."

Hello
I found your post occasionaly searching for Armenian music on the net. Vache Hovsepian passed away in 1979 so he didn't record anything for Peter Gabriel. His version of "Hovern Enkan" was taken "as is" and used in "Passion". On 1:59 we can hear some Indian violin recorded.

That's what I thought. Thank you for the info...

Even if Peter Gabriel had permission to do this, it seems to me quite wrong that he fail to acknowledge the source AND that he present the work as his own.