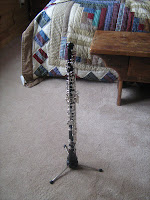 As my 1-year oboe anniversary peeks over the horizon like a timid sun, my aptitude for oboe has established itself.

Today I finally had the lesson I've been dreading all this time. The one where I have to tell her I haven't had much chance to practice lately because of all my call / travel / family obligations / what-have-you. The one where no matter how hard I try I can't for the life of me consistently play a low B because my finger can't bend toward that key somehow. The one where she tells me I have to change my embouchure, to which I've clung like a barnacle for the last several months, because I'm biting the reed, and my attack is wimpy, and I'm not maintaining the air flow necessary to produce a good tone.

"How about this. Try this," Kyoko said. She played a long G.

I put the oboe to my lips and produced a resounding HOOOOOONNNK!

"Maybe pull your reed out just a hair, and keep the air flowing forward."

I started the tone again.

"Relax your lower lip a little..."

How could last Thursday's orchestra rehearsal have felt so satisfying and today be like an exercise in plunking my rear solidly back onto Square One?

The best part is before the lesson waiting for the 12-year-old wunderkind in the time slot before mine to exit the room before I go inside. That's always an ego boost. It's not enough that I'm taller than Kyoko, so when we had to exit the building for a fire drill a couple of weeks ago and the group leader asked, "Do all the faculty have their students with them?" I felt...shall we say...special - like Will Ferrell's character in Elf - when she pointed up toward me to indicate that she, at least, had hers. No, on top of that, I have Superboygenius, son of a professional wind player, taking his lesson right before me, playing his high-speed runs with narry a stray water droplet or missed half-hole, then bundling up into his hat and scarf like mommy told him, before going home for his afternoon milk and cookies...

Sigh...you just gotta laugh at yourself. And be thankful your teacher is delighted to laugh along with you and just help you along as much as she can. She has the patience of a saint. Which is good, because I, whose left fingers on the ulnar side should have some strength from mask ventilating people everyday, am decidedly in an oboe SLUMP.

Speaking of boy geniuses, yesterday on the radio I heard the Sinfonia Piccola by Finnish prodigy Heikki Suolahti, who died at the age of SIXTEEN (of peritonitis, according to some sources). It started off a bit grand (influenced by Sibelius, maybe?) but the latter movements had some really nice moments.

You have such a great way with words ... so why not write something up and then try to play some music to fit the words. Just create something. You can always start by playing 1-3-5 or 5-1 ... I know you've said you can't improvise, but give it a go! Sometimes I find that improvisation frees me up, loosens my embouchure ... and it can be so much fun!