The Quincke and the Pain 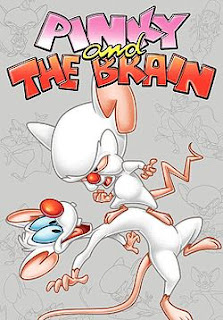 Pinky: "Gee Brain, what do you want to do tonight?"
The Brain: "The same thing we do every night, Pinky—try to take over the world."

When I was in college a few of my classmates and I would gather in the lounge of the Catholic Student Association on many afternoons to watch one of our favorite shows: Steven Spielberg's satirical Animaniacs (our other favorite was Star Trek: the Next Generation). Animaniacs had a recurrent feature entitled Pinky and the Brain, a cartoon about two genetically-enhanced lab mice who, each episode, try (and fail) to "take over the world" by some circuitous, outlandish scheme concocted by The Brain. The Brain is a misanthropic, grumpy, muttering cynic, while his faithful friend, Pinky, is a guileless, clueless, goofy sidekick - a fitting foil. (See videos below for their intro song, which includes the above exchange, and for a song in which The Brain reviews the anatomy of...the brain.)

I was thinking about them recently because I was missing their Christmas special, A Pinky and the Brain Christmas, which is one of my favorite Christmas specials, right up there with the Grinch, Elf, and A Christmas Carol starring George C. Scott as Scrooge.

I was also thinking about them because I've done an unusually high number of spinals this week, for obstetric and orthopedic patients, and that made me think of August Bier and August Hildebrandt, who experimented on each other 110 years ago after trying cocaine spinals on a handful of surgical patients. I can just picture them in their lab saying, Pinky-and-the-Brain like, "Gee, Bier, what do you want to do tonight?" "The same thing we do every night, Hildebrandt - try to take over the spinal cord." 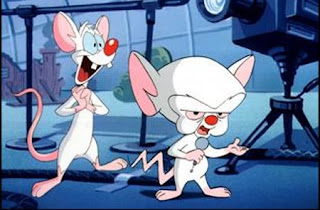 Well, of course it didn't go exactly like that. Here's what really happened.

Bier wanted Hildebrandt to inject a small dose of cocaine into his spinal canal so he could study some of the side effects he had observed in his surgical patients. Hildebrandt couldn't get the syringe holding the cocaine to hook up well to the spinal needle, and a lot of cerebrospinal fluid and medication leaked out. When Hildebrandt tested Bier's sensation, Bier said ow. He had no spinal anesthetic effect.

Hildebrandt volunteered to be guinea pig (now, honestly - would you have done that?). Bier, who was more experienced at administering spinals to begin with, managed to inject the medication into Hildebrandt's spinal canal and kept a meticulous record of his subsequent actions, their timing, and their effects.

The Brain: Pinky, are you pondering what I'm pondering?
Pinky: I think so, Brain, but scratching just makes it worse. -from the episode "Bah Wilderness"

Bier pricked Hildebrandt's thigh with a needle. Then he passed a blunt, curved needle into the soft tissue of the thigh. No pain.

He pushed a long needle down to the thigh bone a few minutes later. No pain.

A few minutes after that, he applied the burning end of a cigar to Hildebrandt's legs. (A cigar in the lab...how quaint...)

He pinched a leg (no pain). He pinched the upper chest (lots o' pain).

He yanked body hairs down below, if you catch my drift (painless - eew). He yanked hairs up high ("very painful").

At 23 minutes he hit Hildebrandt's shins with an iron hammer (not painful; but again, honestly, would you let someone do this experiment on you?! sublimated hostility, anyone?).

At 25 minutes he applied "strong pressure and traction on the testicles" (not painful - ditto above).

At 40 minutes he hit him on the shins again.

At 45 minutes pain sensation was gradually beginning to return.

Bier then writes, "After performing these experiments on our own bodies we proceeded without feeling any symptoms to dine and drink wine and smoke cigars." Both of them subsequently developed debilitating post-dural-puncture headaches that lasted for days (much less common with the finer needles used today). In addition Hildebrandt had shin pain and bruising (ya think?!). Again, I submit: I don't know that I'd have been willing to self-experiment like this, and endure such potential risk and discomfort, in the name of science. I am not one of those who would have exhumed bodies for illicit dissection in the Renaissance period, either. I guess I am not pioneer material...but I'm entirely at peace with that!

The Brain: Pinky, are you pondering what I'm pondering?
Pinky: I think so, Brain, but wouldn't his movies be more suitable for children if he was named Jean-Claude Van Darn? -"Inherit the Wheeze"

One hundred and ten years later I suppose I'm glad they had the audacity to try this. The technique has transformed the specialty of anesthesia and probably made delivery by C-section much safer. But their story does make me wonder if today's ethical standards for experimentation mean that change will have to come more slowly in medicine, and that bold moves, like trying innovative and potentially transformative surgical techniques - think of past leaps in cardiapulmonary bypass, aortic repair, plastic surgery, and transplantation! - will be fewer and farther-between?

What a brilliant post!
I *love* Pinky and the Brain (so thanks very much for that link...)
It's amazing to think what people would do to themselves and the ones that they loved in the name of science (like Jenner infecting his son with cow-pox...), and that without their braveness, some of the advances which we enjoy today would not have happened.

It does make you wonder if the ready access to cocaine in the lab may have been a contributing factor in the decision that this was a brilliant idea. :-)

Jo - I totally forgot about Jenner! Thanks for pointing that out.

Megan - it certainly does make you wonder. Maybe that access contributed to the nature of the pain-sensation techniques chosen, too - I mean, were an iron hammer and a scrotal yanking really necessary?! :)

Then there's Marshall and Morris, who infected themselves with H. pylori. It kills me that it took so long for an infectious origin of peptic ulcers to be accepted by the medical establishment.

As someone who has had three C-sections, I find myself feeling exceedingly grateful to these guys. Thanks for the lesson in medical history!

Although I think the benefits of contemporary research ethics outweigh the costs, by and large, I do tend to believe that the potential for greater discoveries existed before ethical guidelines became so stringent. Virtually all of the best social psychological research was conducted in the 1960s for that reason. I have no ethical objection to people experimenting on themselves except that the scientific community would be unlikely to accept the results. But, others clearly (in my opinion) need to be protected.

T., sounds like Herr Doktors were the original cast members of "Jackass." Or two founding Stooges.

I can just imagine Johnny Knoxville's intro: "This one is called 'The Do-It-Yourself-Spinal.'" [cackles insanely]

If I may be so bold, ladies, the whole abuse-your-buddy-while-he's-temporarily-paralyzed routine... it's a Guy Thing. It's why we don't live as long.

I sat next to an anesthesiologist on a long flight, once. His advice was, if you ever need general anesthesia, ask for adenosine. Its effects completely dissipate in seven seconds, leaving no hint of dopiness behind. (But be sure the surgeon sprinkles in lots of lidocaine while stitching up!)

He related a story about his teacher, who had been an insufficiently-trained medic in the Japanese Army, ordered to administer adenosine for an operation, but used a little too much. The patient’s heart stopped, and he fainted. When he woke up, a few seconds later, the surgeon had noticed neither his fainting nor that the patient had died, and the patient’s heart was already beating again. He stood up and administered the adenosine for the rest of the operation without saying anything.

The story calls attention to another fact of anesthesia: the anesthetist is the only person in the operating room paying attention to whether you’re still alive.