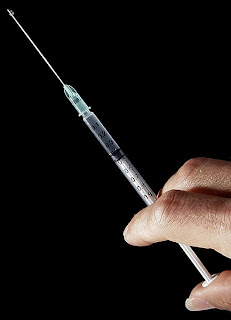 Sometimes patients ask after they wake up from anesthesia, "Did I say anything embarrassing?"
The truth is, the answer is usually no, and our usual response to anyone who asks that question is an innocuous, general reassurance like, "You did fine! You're just waking up and everthing went well."
But I understand completely the questions that must lurk in the back of people's minds over "being put under" a general anesthetic. To require people to put their lives in another's hands and relinquish all control of their minds and bodies to a total stranger is almost too much to ask. Why should we have that kind of trust, often after only a few moments of conversation?
Often I try to spend some of those moments getting people to talk about their biggest concerns - in fact, their fears. The most common nervous question lurking in people's minds seems to be,
What if I don't wake up?
The second most common one is,
What if I wake up in the middle of surgery?
There are others:
Here's the good news: there is no such thing as truth serum. You are highly unlikely to disclose top secret things under the influence of what we give you.
BUT...
What we give you can have disinhibiting effects. Are you a happy drunk or a sad drunk? I get giggly after just one glass of wine, so I seldom drink more than half a glass even with a nice dinner. I would probably be pretty giggly after getting a sedative or some laughing gas. But some people start weeping uncontrollably even though they don't really feel sad, and they can't explain why when we ask why they're crying. For those who hate to lose control of their faculties, this kind of disinhibition ranges from annoying to profoundly invasive.
Also: people may not necessarily be induced to tell the truth with sedative drugs, but sometimes they do talk more. They talk non-stop. Talk, talk, talk, chatter, chatter, chatter, as we wheel the gurney all the way to the operating room. Very rarely they talk about very personal things, like erotic fantasies - in fact, I've only seen that happen once.
As for disinhibited behavior: we have seen the occasional grope or right hook. Just recently a very charming young man started sliding his hand up a scrub tech's side, toward her breast, as he flirtatiously drifted off into a stupor. It's my personal belief - no scientific studies to back this up, that I know of - that people's true nature comes out under anesthesia; that the disinhibiting effects unmask people's natural tendencies or temperament. I've seen sour-faced women wake up from anesthesia flagrantly hostile. Sweet children come out whimpering for their mommies; hellions are...well, hellions. Adolescents do tend to swing at people whether or not their angry at baseline - they just have a lot of pent-up energy, I guess. But for the most part, the truth will out, or so it seems.
Finally: there isn't a drug that will reveal people's secrets better than their very own bodies, histories, and physiologies can. I've written this before: if you lie about how much alcohol you drink or how many pain-killers you take at home on a daily basis or whether you took any cocaine last night, your body will tell the truth under anesthesia (or your urine test or blood test will show it), and we'll all know that you lied. If you're bulimic and you think no one knows, we'll catch a glimpse of your teeth and realize it. If you cut yourself to soothe anxiety, we'll see your scars.
And you know what? We won't really think any worse of you - not for having problems. For disrespect, maybe; for problems, no. Nor will we want to take less good care of you, or do less than our very best for you. Why? Because if we've learned anything as health care workers, it's that EVERYBODY has scars. Everybody has SOMETHING about themselves that they wish were in better shape, that they wish people didn't know about them, and no one - absolutely no one - is perfect, including and perhaps especially ourselves.
Do we sometimes recoil inwardly at what we see? Truthfully, yes. But do we also see the human need beneath it all? Do we care about you? Do we feel bad that not everything in your life is what you want it to be? Do we want to help, and make things better for you in whatever way we can? Yes. That's why we're here, day after day, doing work that's not always easy and not always pleasant. It's because ultimately we came to this work believing in our core that human lives are worth the effort.
I realize that I've seen a lot of "deep, dark secrets" in my line of work. People dying of cancer, teenagers who have lost pregnancies, the bruises of abuse, the tears of the undocumented, the marks of psychiatric disturbance both mild and severe. The truth of our lives, the stories we've lived through and are living through now, are written into our tissues and the workings of our bodies, into the very fabric of our being. The idea of truth serum is a tantalizing one, but it should stay in the movies; the real truth serum lies right in our own veins. I think having to deal with the face-to-face detective work involved in understanding human suffering, and having to sift through clues right before our eyes to discover what matters most to our patients, is a far richer approach than hoping a little sodium thiopental will unlock all the answers; the care-ful approach honors the truth and allows us to work with it fruitfully, whatever it may be.
Posted by T. at 11:01 AM

Just curious, though- what do you tell people when they ask, "what if I wake up during surgery?"

I tell them it's my job to make sure they don't, by watching over their every breath and heartbeat. When people don't have enough anesthesia on board, their bodies tell the story - just the way their bodies often do when people lie about substance abuse. In the case of light anesthesia, people's heart rates and blood pressures go sky high, whether or not they are conscious of the surgical stimulus. I tell people it's my job to notice those signs on the monitors, figure out quickly what's going on, and correct the problem by deepening the anesthetic, if that's in fact my conclusion about those vital signs.

Thanks for stopping by!

As a medical student we had prisoners who would receive surgery at our hospital. The younger they were, no matter how nice at first, always awoke fast and hard - often throwing fists. We'd often prepare for their awakening with a couple people holding their arms gently until they reacted. I attributed it to their constant state of anarchy, fear, and hatred for loss of control. Whether that's really what was happening, I don't know, but it was interesting to observe all teh same.

So how do you know if they abuse drugs?

Just kidding...actually, that's only true some of the time, and only for certain drugs.

The real answer is, years of training. And moments of vigilance.

I wonder how they will treatt my body. Like will they be rough with me and just flop me around? Or will they leave me naked with the door open for the world to see.

Most health care workers I know are extremely careful with patients and very protective of their modesty, and we all wonder why so many people assume we will treat them unkindly / disrespectfully / without gentleness, when for most of us the opposite is our intention and commitment.

I'm guessing it's because someone has treated us poorly when we felt especially vulnerable? It only takes one experience like that to make someone worry about all the other experiences.

And we read in the news about some resident taking pictures of a patient's genitalia and mailing them to pals for a good laugh.

And we might read some medical blogs where some doctor decides to punish a patient with an extra rectal or other needless and unpleasant procedure.

Those things add up, even though they're probably rare. Our culture is really fear focused these days; look at how many people are freaked out that their kids will be kidnapped if they leave them alone for a moment, and don't think about the fact that most kidnappings are done by family members.

I dont assume they will, just kinda have it in the back of my mind. When I had my gallbladder taken out, the nurses seemed to be rushing around. That made me nervous.

Im sceduled to have an incisional hernia repair from that next week.

Last month I had all 4 wisdom teeth removed. I was put under but I did remember waking up for just a moment. I could hear the oral surg. talking to the nurse and then a drill comming on.

I remember thinking at the time oh crap, am I going to feel this! Do they know Im awake?! I think I groaned, Im not sure if I made any noise but I tried. I did go back under so I assume they gave another dose.

I know the sedation is differnt for oral surgry than it is for something more invasive, it was still weird though.

I'm jumping off here, but I know that some anesthesiologists always said that you don't dream under anesthesia. I have a different experience. I clearly remember dreaming under many of the anesthetics I've been given, including the propofol I received recently. I woke up telling the nurse I was dreaming about shopping. I found it very pleasant.

Thus, true or not, I always told my patients that they could pick out any dream they wanted and they would have it while they were asleep. I told them to dream big, and enjoy it.

What does the literature say??

I have PTSD and dissociative amnesia from childhood sexual abuse, as well as some level of Dissociative Identity Disorder (aka Multiple Personality Disorder). So I really appreciate this post. My greatest fear is what I might say or do under the influence of anesthesia.

The last time I was sedated, my doctor went from being compassionate and caring before the procedure to being cold and hostile toward me afterwards. I am still haunted that I might have said or done something to offend him that I don't remember.

I got violent with the nurses( I was told )when I came to.. was told I was very strong and hit the nurses postop. I had bruises all over my body. I guess it was a bad reaction to anesthesia. The 2nd time I had anesthesia "twilight" I did pee on myself because the surgery went alot longer than expected. I was convinced for 2 days I was awake those 5 minutes of surgery lol Was actually 2 hours.