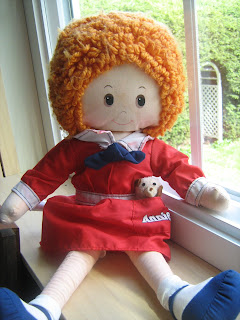 She was great!
Her joy, humor, lovely singing voice, spunkiness, and warm, loving spirit came shining right through.
Two more shows to go.  Will resurface afterward!
***
The following (rather blurry) video from the second performance is shared with the performer's permission.

Moments she and I don't want to forget from the run:
Now we deal with the post-show let-down.  But with glorious memories to help us get through it!
Posted by T. at 9:47 AM

that was beautiful! and especially impressive, given that i'm twice her age and can't carry a tune!

What a fantastic voice!!! What a great performance, she carries her voice well:)

That was wonderful!! She has a great voice! What a proud mama you must be. Have a Happy Mother's Day tomorrow! ; )

So could you sit through without getting all teary-eyed? I know I wouldn't be able to!

Congratulations! How proud you must be. Have a Happy Mother's Day!

Thanks for the wonderful support, everybody!

Now that it's all over and we're missing the show terribly, we've all been playing and replaying Annie songs for ourselves. If anyone has tips for dealing with post-show blues, we're all ears! I think we're just going to have to grieve and reminisce and grieve and reminisce till the sun comes out again... :)

Oh my....
I got a sound card on my work PC just in time... I've just had to duck behind my desk to stop myself welling up - you have an amazingly talented daughter. You must be so proud of her.

I just spoke with 'grandpa' T - and he suggested that I watch your daughter - and OMG!- what a beautiful young lady! - and so talented...it brought tears to my eyes and lifted up my soul to Praise our Creator for all things bright and beautiful!!!
Peace,
Karen
friend of grandpa and grandma T

What a voice! She sang it so beautifully. That song can be really tough, and some kids make it shrill, but not her. She nailed it, kept the emotion and even a bit of vibrato - Wow!

(The other kids were great too -looks like it was a really well done production..)

Thanks Dr. P! You've enumerated all the reasons we are totally starry-eyed over her voice - that lyrical quality, clear as a bell, able to project without sounding brassy or nasal, a HINT of vibrato but not too much, angelic...

And didn't you love that police officer?! He totally made the part his own! My daugher said he even muttered under his breath in character while he was on stage.

We're awe-struck enough over her acting and musical gifts, but what really warms this mother's heart is the feedback we heard from the director and parents of other cast members about how she set such an amazing example of professionalism, hard work, and team spirit. We are totally blown away both as audience members and as parents. May she keep up the great work! :)