On "Getting Used to the Gruesome" 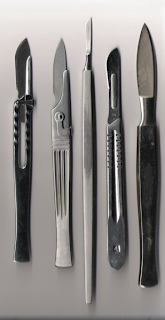 A few days ago surgeon-author Pauline Chen wrote a great piece for the New York Times entitled "The Surgeon and the Torture Memos" (with accompanying discussion on the NYT Well Blog).  Here's an excerpt:

“Habituation,” I finally said. “You get used it.”

That response, and the idea of becoming habituated, has been haunting me ever since. Is it possible for all of us to become habituated to the horrific?>>

I had that same chilling question in my head during my first year out of medical school.  I did my internship in pediatrics, at my medical school's main tertiary care center.  I got pretty good at doing I.V.'s, blood draws, arterial sticks, and spinal taps in very young children that year.  What I also got good at was not letting their tears and screams distract me from the task at hand.  It shocks me still to know that I am capable of ignoring the sobs of a child in the name of some duty or greater good.  I heard them crying and screaming for their parents.  I saw the tears flowing down their faces.  I felt their terror and the force with which nurses and other assistants held them down as I pierced their skin with sharp objects.  But my face was unmoving, my will resolute, somehow sympathetic and detached all at once.
Anyone who knows me knows that I am an incurable bleeding heart.  Show me a sad movie, photo evidence of child abuse, or a poignant love song, and I'll weep buckets.  Patients who suffer make my heart ache.  People with hard lives trouble my mind.  Deep beneath the more rational trappings of "standard of care" and duty to protect lies a kind of love for the human person that, I hope, can get across as compassion if I don't forget to let it through.
But there's that other side of me.  The side I joke about:  the side that enjoys using needles and instruments on people.  I LOVE intubating people.  I really, really enjoy that moment when the I.V. needle gains access to a vein, and you know you're in, or the epidural syringe gives a little and you think, "Aaaaaahhh, there it is."  In the face of another's physical discomfort, I can mumble an apology and tell that person, "We're almost there, you're doing great" without missing a beat.  It's not that I don't mean what I say. But I'm not fazed.
It makes me wonder:  if someone who's as much of a "softie" as I am can torture people, including children - even if the kind of "torture" I have to inflict only lasts a few seconds - then how universal is that capacity to inflict pain on another and be immune to the sufferer's cries?  Doesn't it mean that we are no different from the perpetrators we so relish condemning?  Does the compassion with which I try to live my life really make me any better?
I would love to say, "Yes, I am a better person than that.  I am a good person.  I would never intentionally inflict unnecessary harm or suffering on another human being."  But I know that we human beings are never that simple or predictable, and that there but for the grace of different circumstances go I.
***
Bongi, surgeon and author of the superb blog other things amanzi, is hosting this week's edition of SurgeXperiences, the surgical blog carnival.  Please check out SurgeXperiences 222!
Posted by T. at 11:02 AM

"Torture: the action or practice of inflicting severe pain on someone as a punishment or to force them to do or say something, or for the pleasure of the person inflicting the pain."

Fortunately, the good feeling you get with a successful IV insertion doesn't qualify.

You're right, of course, Toni. But the capacity for remaining unruffled in the face of it, while practical, can be a little...scary, if one thinks about it too much...

i hate paediatric surgery. you inflict pain on a child who has no understanding. i just can't get used to it.

adults, on the other hand, although they may not like what i do to them, have the capacity to understand i'm doing it for their benefit.

and therein lies the difference. just because i'm totally desensitised when doing unpleasant things to people for their benefit does not mean i have the capacity to torturthose people responsible need to look back in history to the german soldiers who became desensitised enough to kill jews. there is no excuse. i don't know how they kiss their children at night.

Anon, be glad there are people like T and Bongi and Buckeye when that 6 yo has appendicitis or a tonsilar abcess, etc. If there weren't those children would die.

T, another great post. Yes, I have learned to "justify" the pain I might inflict as "necessary to heal or help" the patient in front of me. I don't think I could ever inflict pain simply to inflict pain. I hope I am incapable of that.

Hey, I follow Pauline Chen's blog also and read that post too...it is scary to think you could become "habituated" to torturing someone. I do think she is correct--any human being, esp. a young person, can be taught to become cruel, by experiencing cruelty and being taught cruelty. It is shocking that adults were brainwashed in Nazi Germany, but that demonstrates the power of "herd mentality"...something to fear, definitely...
As for surgery, I notice that I dissociate the person from the patient when I operate on them. That's why I don't like when my C/S patients are talking in the OR. Once I enter the OR, they are a body to operate on, not someone's mother, sister, wife, child. Being reminded of the incredibly precious human being on the table while I am operating would perhaps paralyze me. I have to blog about this someday. Thanks for the inspiration!

I think the compassion you have IS definitely what differentiates you from a torturer. To me, a torturer is, by definition, a sociopath. Sociopaths have no conscience. A sociopath wouldn't even be having the thoughts you're having about this subject because they just don't care about other people's feelings. (Great book on the subject is "The Sociopath Next Door")

We have to do painful things to people sometimes to make them better. If we were paralyzed by their cries, we would be completely ineffective. I don't think this means we are anywhere near to crossing over a line into torture. Not that it's not OK to think about it, but it doesn't sound like you really need to worry!

Interesting, and something I've wondered about for years as a critical care nurse (both adult and pediatric).

We rightfully justify the things we do to our patients as being for some sort of higher good, yet the dissociation that is necessary to do those things and do them well, is a curious and somewhat horrifying thing when contemplated outside the "sacred space" of hospital, surgery, the immediacy of need when confronted with a dying child. We do brutal things because we believe deeply that they will save a life, ease distress, cure disease.

I am reminded of Richard Selzer, surgeon and writer, who wrote often of the separate space, the ritual and sacralization of cutting into human flesh. He wrote in order to make that dissonance acceptable and human, I believe.

Habituated? I've come to terms with my own ability to step aside from the immediate sympathy because it does allow me to do my job well, and because I believe that I do those things with compassion. I believe that the difference is that of intent. I can live with the immediate dissonance of inflicting pain putting in an IV or doing an arterial stick or putting in any of a number of foreign objects into a fellow human being because the intent is one of healing. I take pleasure in my hard won skills because it means that I ultimately inflict less pain.

One of the reasons (one of many reasons) I choose pathology is that I could never get used to that feeling of hurting someone -- no matter how much it would help them. When my med school classmates would say "Wasn't that great I got to put in the NG tube!" I always felt a little nauseous. The feeling that I'm hurting someone, or making someone scream or cry makes my blood curdle and I walk away feeling shaken. I knew that with time, I could get over that feeling, but I wasn't sure I WANTED to get over it. It felt like loosing part of my humanity. I respect people who are able to dissasociate themselves from the procedure because we need people like you to do the blood draws and epidurals, etc. But it's not for me!

On the other hand, I really liked surgery because you only do procedures on patients who are asleep. You get the fun of the procedure without the feeling that you are torturing someone. Much better!

Some aspects of the CIA's MK-Ultra Project's unconsented-to LSD experimentation on US citizens have been declassified:
https://www.cia.gov/library/center-for-the-study-of-intelligence/kent-csi/docs/v44i4a07p_0021.htm

So please, please, let's avoid the dangerous meme that Nazi doctors had a corner on hideous breaches of medical ethics and sociopathy among physicians!

Your story about pediatrics took me back 40 years, when I was that child being stuck with needles. I say no, over and over again, but they did it to me anyway. As a child there was no recourse for me, just to accept my fate.

A few years later, that training kicked in, when I started being sexually abused. I said no, but he did it to me anyway, saying it was for my own good. It didn't occur to me that there was anything wrong with this, since it was just like at the doctor's office.

Humorous article. I'm glad that you are good at what you do and enjoy your profession, but maybe you like it too much? You should always remember to be cautious with your tools for you and your patients sake!