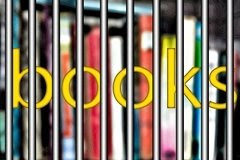 When I was a child in the Philippines, really great books weren't so easy to get.  The best ones were abroad, and I'd look forward to the moments when my father would unpack his suitcase from a business trip and hand me his latest acquisitions.  These I would read over and over, relishing the weight of them in my hands, the aroma of the binding glue wafting up from the open pages, the illustrations.
Does everyone who's had access to books have special "reading memories?"  There are a few significant reading memories that stand out in my mind.  I remember enjoying a two-volume collection of Grimms' fairy tales; a children's Bible with striking, colorful, folk art illustrations; a worn yellow copy of Brer Rabbit tales; a couple of books with titles like "365 Bedtime Stories;" and my mom coming home with a hardback edition of Harriet the Spy.

When we moved to the U.S. my parents enrolled me at a school called Stone Ridge, which I still consider the greatest educational experience of my life (including some wonderful college years at Harvard, graduate school at Tufts, and med school!).  I remember realizing what a thick accent I had when I was asked to read aloud and switching it off almost immediately.  I can still switch from one accent to the other depending on which country I'm in.  I also remember feeling incredibly competent during read-alouds.  But the experience that's seared into my memory forever is the moment I first walked into the Lower School library.  My mouth just dropped open when I saw all the books - shelves and shelves of books, some extending from floor to ceiling.  And the whole room smelled of books - a leathery, delicious, bookish smell.  It was heavenly.
I checked out Anna Elizabeth Bennett's book Little Witch and read it in a day.  I read John Bellairs, E.L. Konigsburg, Katherine Paterson, and Madeleine L'Engle.  I read and read and read and read.  Our assigned reading, Natalie Babbitt's Tuck Everlasting, opened my mind to the way language can be used evocatively and is still one of my favorite books.  To this day just walking into a book store or a book-filled room makes me sigh with pleasure.
Books are precious because they contain human thoughts, ideas, and stories.  They are repositories of our souls, in a way.  They have power.  They can connect and divide us. They can keep us present even after we've gone.
In the Philippines some corrupt customs officials are violating a U.N. treaty (the 1950 Florence Agreement on the Importation of Educational, Scientific, and Cultural Materials) and exploiting people's love of books and need to import them by imposing tariffs on all book imports.  In effect, they are holding books in locked storage for ransom.
Now, I am proud of certain aspects of my Filipino heritage, but one thing I have always been frustrated by and ashamed of is how corrupt our society is.  You can't even get out of being cited for a non-existing - yes, literally NON-EXISTING - violation of some sort (traffic, utility, you name it) without bribing some official.  It's like that Cameroon police officer who was reported by David Torrey Peters as saying to a taxi driver, "You think just because there isn't an AIDS vaccine I can't arrest you for not having one?"  It's TOTALLY like that over there. To expect corrupt officials to appreciate the sacredness of books, understand what they're doing, and CARE about any of it is a hopeless idea.  They know not what they do; but in many ways they know exactly what they're doing - and they're getting extra pocket money for it and grinning all the way to the bank.
Robin Hemley, director of the nonfiction writing program at the University of Iowa, who is on a Guggenheim Fellowship in Manila for the year, wrote an article about the book blockade by the Philippine Bureau of Customs which I have to excerpt here (there's also a good blog post here about this and a follow-up letter from Hemley here):

Over coffee one afternoon, a book-industry professional (whom I can't identify) told me that for the past two months virtually no imported books had entered the country, in part because of the success of one book, Twilight by Stephenie Meyer. The book, an international best seller, had apparently attracted the attention of customs officials. When an examiner named Rene Agulan opened a shipment of books, he demanded that duty be paid on it.

"Ah, you can't be too successful in this country," I said. "If you are, then people start demanding a cut..."

...The importer of Twilight made a mistake and paid the duty requested. A mistake because such duty flies in the face of the Florence Agreement, a U.N. treaty that was signed by the Philippines in 1952, guaranteeing the free flow of "educational, scientific, and cultural materials" between countries and declaring that imported books should be duty-free. Mr. Agulan told the importer that because the books were not educational (i.e., textbooks) they were subject to duty. Perhaps they aren't educational, I might have argued, but aren't they "cultural"?

No matter. With this one success under their belt, customs curtailed all air shipments of books entering the country. Weeks went by as booksellers tried to get their books out of storage and started intense negotiations with various government officials.

What doubly frustrated booksellers and importers was that the explanations they received from various officials made no sense. It was clear that, for whatever reason—perhaps the 30-billion-peso ($625 million) shortfall in projected customs revenue—customs would go through the motions of having a reasonable argument while in fact having none at all.

Customs Undersecretary Espele Sales explained the government's position to a group of frustrated booksellers and importers in an Orwellian PowerPoint presentation, at which she reinterpreted the Florence Agreement as well as Philippine law RA 8047, providing for "the tax and duty-free importation of books or raw materials to be used in book publishing." For lack of a comma after the word "books," the undersecretary argued that only books "used in book publishing" (her underlining) were tax-exempt.

"What kind of book is that?" one publisher asked me afterward. "A book used in book publishing." And she laughed ruefully.

I thought about it. Maybe I should start writing a few.Harry the Cultural and Educational Potter and His Fondness for Baskerville Type.

Likewise, with the Florence Agreement, she argued that only educational books could be considered protected by the U.N. treaty. Customs would henceforth be the arbiter of what was and wasn't educational.

"For 50 years, everyone has misinterpreted the treaty and now you alone have interpreted it correctly?" she was asked.

"Yes," she told the stunned booksellers.

If you love books, reading, or writing, please spread the word about this shameful situation to as many people as you can.  You can also join the Facebook cause "Filipinos Against the Taxation of Books by Customs,"  flood the office of the President with emails here, email UNESCO here, or click here for other ideas.
Posted by T. at 8:54 AM