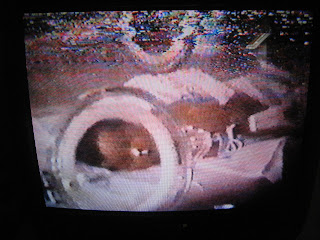 Sometimes on a lazy Saturday morning, in addition to enjoying a cup of chocolate-flavored coffee and watching Saturday morning cartoons, I like to look at old family videos and albums, upload sepia-toned photos of ancestors, go through old letters and memorabilia, and reminisce a little bit.
This morning I was thinking about what happened when I was born.  It was a bit of a rough, early-ish birth.  Though I was relatively huge - over three pounds - by modern preemie standards, back in the early '70's in a Third World country, with me gasping for air and needing to be resuscitated on more than one occasion (pulmonary surfactant wouldn't be in clinical use until I was graduating from high school), things felt a little dicey for those involved.  In these VERY fuzzy pictures-of-pictures (above and below) I am already at the "feeder-and-grower" stage. 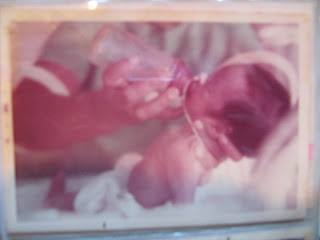 There's a happy follow-up story.  My mother once had lunch at a restaurant called Cafe Juanita, whose owner had gone into the restaurant business after decades in practice as an OB/gyn.  When the owner saw her name in the reservation book, he rushed to her table and said, "Doctora!" (My mom had been a pediatrician.)  "I was the OB resident who scrubbed in during your C-section!  You had a baby, girl, I remember.  Premature."
"She's now grown, married, with kids of her own," my mother told him.
Of course when I heard this story I had to see him for myself, this man who helped yank me from my mother's open womb on one of his weekends on-call.  On our last trip to the Philippines we visited his charming restaurant and got to meet him.  It was a thrill to think, "Wow, he was there the very first moment my physical being saw the light of day.  In fact, he helped make that moment happen!"
Happy long-term follow-up is such a blessing in medicine.  I bet he never thought he'd have his youngest patient - literally a fetus when we first met - come back to say hello!
Posted by T. at 9:03 AM

That's a beautiful story. I always think that preemies who survived were really destined to remain on this Earth to do something great! Your story proves it all the more.

I'm kind of biased. Hubby was a 2lb. 2oz. preemie about 30 weeks in 1970 and had surgery for patent ductus. I figure he shouldn't have survived, but did because he has a greater purpose here!

OMG!! What an amazing story!

That reminds me of the time that my mom ran into her oncologist. When he saw her, he was shocked and really happy to see her. I guess she was far more sick than he let on and he really had not expected her to survive. I'm glad that we didn't know back then, but she's been in remission for over 20 years.

HugeMD - your hubby sounds like a totally special guy, from what you've written of him! I hope I can create of my time on this planet a life worthy of the chance I got. It's humbling sometimes to learn of one's origins - I can never think of my birth story without seeing an image of my mother in tears before her emergency C-section protesting that I was too small, and my father with his nose against the NICU window looking at the incubator from the outside and praying fervently for my survival. It's humbling to be at the receiving end of such love when all I did was exist.

Anali - that is WONDERFUL. Good news for her, and for him too!

Thats awesome. I was a NICU grad as well :-)

That's pretty amazing. Thank you for sharing your story.

Oh, that's so COOL! I love running into the little kids I've delivered...I can't even imagine what it would be like to meet them as adults!

I also like that the OB had a second career later in life...how funny...