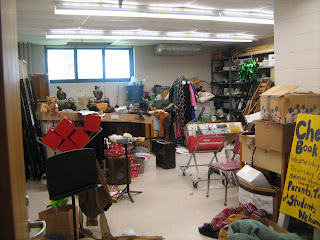 Ok, the last dress rehearsal is over.  The next time we go to the auditorium, it'll be for opening night.
I'm at that point on the roller coaster ride when it's too late to be terrified of the ascent, the car is right at the equilibrium point on top of the rise, suspended almost in perfect stillness, and there's nothing I can do but accept: I'm plunging forward.  I have to accept the adrenaline rush and let it propel me to the delicious exhilaration on the other side of the fear.  It's time to let everything else go and just let this happen.
Memories flash before me:
Her heartbreak the first time she auditioned for this role but wasn't chosen...
Her joy when she auditioned at school and got the part...
My concern when peer jealousies seemed to pose a threat to the happiness and emotional safety of the experience...(Apparently it wasn't just the kids that expressed resentment; the director told me today that even some parents gave him flak after she got cast, with words like, "It appears you don't know how things are done around here.")
A nurse at work tried to console me with the prediction, from her own experience, that once people got to know my daughter and her work, the resentments would melt away and support would ensue.
She was right.  I was told by a couple of faculty members that my daughter's fellow cast members have rallied around her.
She has worked hard, sung beautifully, and acted well; but more than that, through her diligence, humor, positive spirit, kindness, and professionalism, she has, according to the director, been a leader in the company despite being its youngest member.
She's shining as brightly as her smile, and whatever happens during the run, we know she has already triumphed for herself.
With that, I think I can release my vice-like grip on the safety bar and just enjoy the ride. 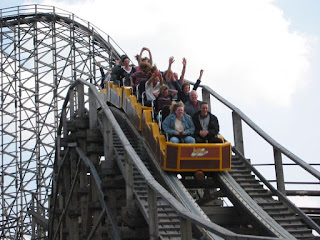 Bring a lot of tissues. This is just the first ride, and it will certainly be an emotional one. Michael and I spent a good decade and a half of our lives going to plays and concerts (and speech tournaments) that our kids were in, and the direct line to the tear ducts always opened the same way. Your daughter will be having the time of her life, and you and your husband will be zombies. That's the way it goes.

Also, the resentments that come from peers tends to disappear during a performance: her performance belongs to the whole cast. And it will also belong to the whole audience.

Elaine - you have no idea what a comfort it is to know of other parents who've "been there!" What great advice - I'll have my tissues at the ready.

Even after the first read-through, when she was reading the locket scene for me, I started bawling, and today when she started singing the reprise of "Maybe" to herself ("Silly to cry, nothing to fear, betcha where they live's as nice as right here...), I had to tell her I was getting choked up, because all I hear is my OWN baby tyring to convince herself there's nothing to fear!

I think just SEEING her first entrance is going to open up those tear ducts. Her father's just as much of a softie - I think I'll bring TWO packs of tissues! :)

I do hope her cast members embrace her performance as all of theirs. The stories from backstage and the vibe I felt there today bode well.

You are such a proud mommy...very sweet post! Can't wait to hear all about it...