I once knew an anesthesiologist who wasn't chosen for jury duty during a "pain and suffering" case after he stated, "I work in an ICU. I think I have a pretty good idea of what 'pain' and 'suffering' are."

Pain is our great nemesis. We deal with it every day - in fact, every case of every day. Anesthetists and anesthesiologists expend tremendous energy, mentally and physically, working to prevent post-surgical pain as much as they can. We plan certain drug regimens to be given before and during surgery, adjust them according to the way patients respond under anesthesia, and follow patients after surgery in an effort to ensure their comfort. This dimension of our practice, protecting people from their own suffering, occurs in tandem with protecting patients from physiologic danger, such as disturbances of heart rhythm or blood pressure that can on occasion be life-threatening. Pain is the enemy.
But that's not "what nature intended." One need only imagine life without pain to realize why it's important, even necessary. Pain is a message, an invitation to care and a warning that we need to start healing ourselves or seek help. I once knew a quadriplegic man who was unable to feel the pain of a very hot surface under his heel and developed a very nasty burn there. If we felt no pain from broken bones we might delay getting help and wind up unable to set the fracture properly. If we experienced no emotional pain from loss, our relationships would be empty of compassion and love and perhaps respect. When I imagine a world in which parents blithely wave to their children on college drop-off day, or brush off the deep gash in their toddler's leg (while the toddler, in this tearless, painless utopia, tries to pick it apart in fascination), I have to wonder if a world without suffering might not just be a hell of indifference and ill-health. Our responses to suffering define our humanity - do we ignore pain, revile it, laugh in its face, deny it, perpetuate it, or try to alleviate it? I believe we're called to take care of ourselves and each other because of pain and suffering.
Like death, pain might deserve to be personified as a kind of "angel," too, protecting us with tough love. But sometimes the demons get the upper hand. Pain can induce exasperation, numbed responses, or indifference after repeated exposures: the dreaded "compassion fatigue" among health care and humanitarian workers that's not often talked-about but should be. There's also what's often termed "pathologic" pain, pain that serves no physiologic purpose and winds up just torturing patients with a life of suffering that they just can't heal.

One example of pathologic pain is chronic pain after nerve injury, a problem often treated by pain doctors. Pain medicine is a subspecialty of anesthesiology, neurology, and PM&R (physical medicine and rehabilitation), and pain doctors struggle long and hard to try to help patients whose problems are often so difficult to treat that the patients can become suicidal from their pain. In 1872 Silas Weir Mitchell*, who observed several cases of neuropathic pain during the Civil War, wrote a description of the effects of chronic pain in Injuries of Nerves and Their Consequences that rings true to this day: "Perhaps few persons who are not physicians can realize the influence which long-continued and unendurable pain may have on both body and mind. . . Under such torments the temper changes, the most amiable grow irritable, the bravest soldier becomes a coward, and the strongest man is scarcely less nervous than the most hysterical girl. Nothing can better illustrate the extent to which these statements may be true than the cases of burning pain, or, as I prefer to term it, Causalgia, the most terrible of all tortures which a nerve wound may inflict." Back then, when limb amputations were commonly used to treat war wounds, amputation was the common treatment for peripheral nerve injury as well.
This often brought about another pathologic pain state: phantom limb pain. 50-80% of people who have a limb amputated continue to experience sensations, including painful ones, from the amputated limb. Anesthesiologists have tried offering epidurals or nerve blocks to relieve the awful sensations from the area of the amputated limb, but such measures have been unreliable. Neuroscientist V. S. Ramachandran explained during his 2003 Reith Lecture for the BBC why this phenomenon occurs: 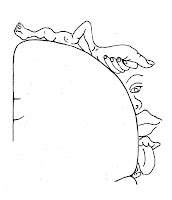 a faithful representation of the entire body surface. It's almost as though you have a little person draped on the surface of the brain. It's called the Penfield homunculus, and for the most part it's continuous, which is what you mean by a map, but there is one peculiarity and that is the representation of the face on this map, on the surface of the brain, is right next to the representation of the hand on this map...
So I realised that what's going on here is when you amputate the arm, the part of the cortex of the brain corresponding to the hand is not receiving any signals because you've removed the hand. So it's hungry for sensory input. So what happens is the sensory input from the face skin now invades the vacated territory corresponding to the missing hand, and that then is misinterpreted by higher centres in the brain and arising from the missing phantom hand. And that's why the patient says, every time you touch his face he says oh that's my phantom thumb you're touching, that's my phantom index finger, that's my phantom pinkie. In fact you can even put an ice cube on the face and the patient will say oh my thumb is ice cold. You can put a drop of hot water, in fact you put a drop of hot water and the water started trickling down the face, the patient will trace the trickle on his phantom with his normal hand following its path. On one occasion we had the patient raise his phantom and he was amazed to feel the trickle going uphill which is against the law of physics.

Anesthetizing the phantom limb doesn't always work, but Ramachandran found that tricking the brain might provide a promising alternative. He and his colleagues created a device called the mirror box, in which a patient with a hand amputation, for example, places the existing hand into a slot on one side of the box and a mirror image of it is created on the other side of the box. Both "hands" are visible to the patient, and he or she can then "retrain" the phantom hand to uncurl out of a cramped position or make "normal" movement painlessly, by using the existing hand.
The lesson once again is this: our experiences train our minds and transform our brains, physically. Learning "rewires" us, and new learning has the potential to heal us. Both physical and psychological pain cause changes in the cingulate gyrus, but we can send our brains to boot camp, and retrain them, to try to work against changes that cause chronic suffering. I find this ultimately uplifting. We can't always avoid pain in our lives, and it may be the worst thing about life, but our work to heal it isn't always going to be futile, and we have reason to have hope.

have you read The Gift of Pain (alternately titled Pain: the Gift No One Wants) by Paul Brand and Philip Yancey? I think you might enjoy it, it relates a lot to what you're also saying about pain.

I've read other Yancey but not that one. Will look out for it!

Very nice post T! Please submit it to the next SurgeXperiences (http://surgexperiences.wordpress.com/2007/11/02/surgexperiences-108-to-be-hosted-at-aggravated-docsurg/)

Thanks! You're the second person who has suggested that!

I´m studying English Philology at the University of Jaen (Spain). I was looking for information about The Yellow Wallpaper by Perkins Gilman because I must write a paper about it and I´ve found this blog. It is very interesting! And for all who haven´t read The Yellow Wallpaper, please read it! It is amazing, so many symbols and feelings... I think there is a meaningful connection between creativity and madness, pain and suffering. Just think about Virginia Woolf, Ernest Hemingway, and a looong etc. The title of my paper: Relationships between Literature and Madness...

Thanks for stopping by! If you have an interest in literature and madness, I think you'd enjoy Kay Redfield Jamison's book Touched with Fire: Manic Depressive Illness and the Artistic Temperament - though it's such a well-known book you've probably read it already!

I actually mentioned Hemingway in another post I wrote, about electroconvulsive or "shock" therapy. So many famous people went through that - him, Sylvia Plath, Artaud...